Thousands of Nepalis still living in tents months after a massive earthquake are facing a desperate winter, because of a fuel crisis and bickering politicians’ failure to spend a $4.1 billion reconstruction fund.

Eight months after a 7.8-magnitude quake killed almost 8,900 people and destroyed some half a million homes, thousands of survivors are bracing for the Himalayan winter without proper clothes, bedding or shelter.

In the remote village of Philim, close to the quake’s epicentre in western Nepal, the disaster reduced the school’s dormitory to rubble, forcing some 200 children to take refuge in tents.

The flimsy structures offer little protection against bone-chilling winds that whip through the village where overnight temperatures currently hover around two degrees Celsius (35.6 Fahrenheit) and are set to fall further.

“It gets so cold at night, I wish we had thicker blankets,” 12-year-old Dawa Phunchok Lama told AFP.

Many of the children live hours from Philim but are staying in the tents because they can no longer commute from their homes after quake-triggered landslides blocked hillside trails. 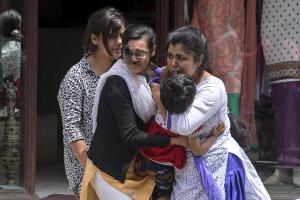 Local residents evacuate from a shop during an earthquake in central Kathmandu, Nepal, May 12, 2015. …

“We have limited food stocks — no vegetables, enough lentils to last a week, cooking oil for 10 days perhaps. But most of all, I worry about the cold and its impact on my kids,” school headmaster Mukti Adhikari said.

“It’s too difficult for them to go home, so we keep them here… but now I am worried they will freeze to death since no one has adequate clothing or proper bedding,” he told AFP.

But its failure to establish the National Reconstruction Authority (NRA) has delayed the start of rebuilding, meaning thousands are still homeless. 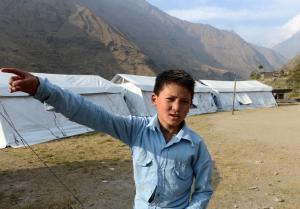 “We are closing in on a deadline — we are aware that a day will come soon when we won’t be able to go up those trails,” said World Food Programme country director Pippa Bradford.

But severe fuel shortages have hamstrung their race against time, with hundreds of trucks carrying petrol and other vital supplies stuck at the border between Nepal and India, the country’s main supplier.

Ethnic minority protesters have blocked a major checkpoint for over 10 weeks to demand changes to the nation’s new constitution.

Movement of cargo through other checkpoints has also slowed to a crawl, prompting Nepal to accuse India, which has criticised the charter, of enforcing an “unofficial blockade” — a charge New Delhi denies. 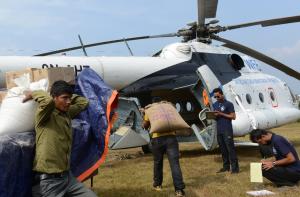 “Currently, our fuel supplies amount to less than a quarter of our needs and we are facing a backlog on deliveries,” Bradford told AFP.

“It’s a tragedy — our winter supplies are sitting in warehouses, they are going to be of no use if we don’t get them up the mountains in time.”

Damaged households have so far received just $150 in compensation, while the government has promised an additional $2,000 once the NRA is set up and able to disburse funds.

According to experts, a major reason for the delay is jostling by the ruling UML party and opposition Nepali Congress to see their preferred candidate head the new body. 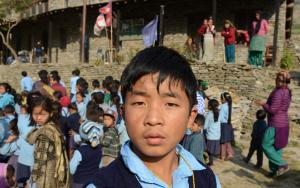 “The political parties seem more interested in horse-trading on influential positions than in getting on with rebuilding,” a frustrated Rensje Teerink, head of the European Union delegation to Nepal, told AFP.

Law minister Agni Prasad Kharel insisted the government planned to set up the NRA “in the next few weeks”.

“We have lost a lot of time because the opposition is creating obstacles. We are trying our best to resolve it,” Kharel told AFP.

Some frustrated donors, like the Asian Development Bank (ADB), have ignored misgivings and pressed on without waiting for the NRA, which will be charged with overseeing the rebuilding in a country plagued with corruption.

The ADB has decided to go ahead with giving $90 million of its $600 million pledge to Nepal’s government to rebuild schools, bank country director Kenichi Yokoyama said.

“We would have preferred to work with the NRA so it could monitor the process and speed up decision making,” said Yokoyama.

“But there is an urgent need to rebuild the country and we simply cannot wait any longer.”