A family watches the Turkish drama series Dirilis Ertugrul on Pakistani TV during the holy month of Ramadan in Islamabad.

Pakistan has suffered an identity crisis since it was forged out of the bloody partition of British colonial India in 1947.

To fill the void, Pakistan’s political and military elite have promoted an Islamic identity and imported values from other parts of the Muslim world, observers say, while shunning their own Indian subcontinent heritage.

Pakistan’s military dictator Ziaul Haq, who ruled during the 1980s, famously said Pakistan was an “ideological state,” adding that if you “take Islam out of Pakistan and make it a secular state, it would collapse.”

Consequently, many of Pakistan’s national heroes have been foreign Muslim figures, including former Afghan kings, Persian emperors, and Arab rulers. 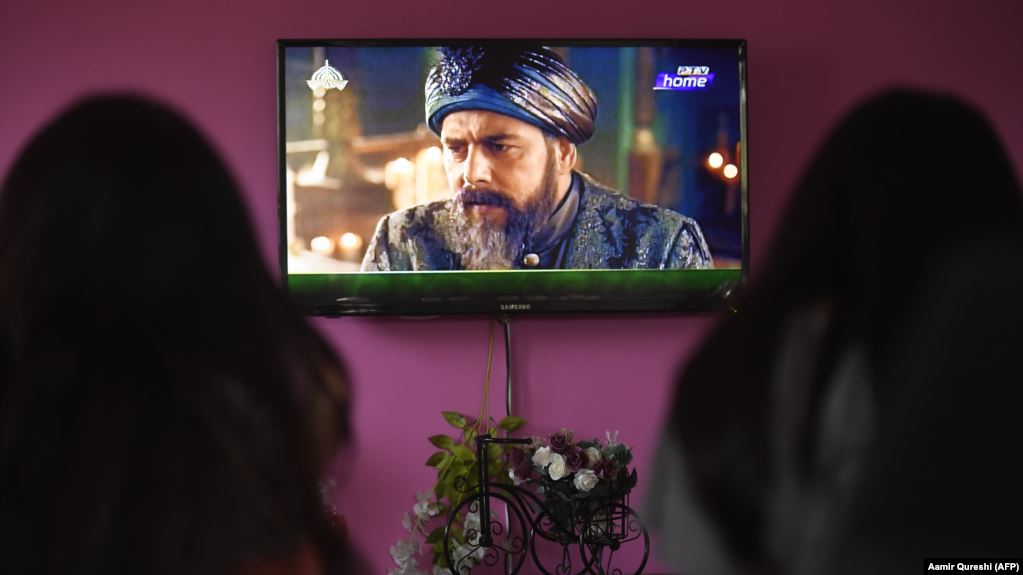 A family watches the Turkish drama series Dirilis Ertugrul on Pakistani TV during the holy month of Ramadan in Islamabad.

Recently, an obscure character from Turkish history has been making headway into the Pakistani national narrative.

Very little is known about the 13th-century Muslim Turk leader Ertugrul — the father of the founder of the Ottoman Empire, Osman I. The Ottomans ruled large parts of Southeastern Europe, North Africa, the Caucasus, and the Middle East for centuries.

Now Ertugrul’s life and times are the focus of a big-budget Turkish TV drama that has gripped Pakistan, a multiethnic, Muslim-majority country of 220 million. The show has been widely described as the Muslim version of Game Of Thrones, the American TV fantasy series.

The popularity in Pakistan of Dirilis Ertugrul, or Ertugrul’s Resurrection, owes much to Pakistani Prime Minister Imran Khan. He has championed the series and urged young Pakistanis to watch it. And since it was dubbed in Pakistan’s official Urdu language, the show’s popularity has soared.

Despite its popularity, there has been debate over why Khan has fervently promoted the fictional drama series — a programme that promotes Islam and holy war while casting believers of other religions as enemies.

Many observers say Khan’s cheerleading of the programme is political.

The former cricket star was long known for his playboy lifestyle. But he has embraced conservative Islam as a politician, allying himself with hard-line religious groups and the country’s powerful military, which has an oversized role in foreign and domestic politics.

Madiha Afzal, the author of Pakistan Under Siege: Extremism, Society, And The State, says the government’s endorsement of Dirilis Ertugrul “fits in perfectly with how the Pakistani state has defined its nationalism: based on Islam and on the enmity with India.”

Pakistan and India, two nuclear-armed foes, have fought four wars against each other since partition, when British India was carved up into a majority-Hindu India and Muslim-majority Pakistan.

Afzal, who is a fellow at the Brookings Institution in Washington, says it is “no surprise” that Khan and Pakistan’s military are “doubling down on this,” given Khan’s own personal convictions and his “closeness with the military.”

Khan has recommended that Pakistani youth watch Dirilis Ertugrul in order to learn to differentiate between what he calls real Islamic culture and a “third-hand” one that reaches the country via Hollywood and Bollywood films.

“I want our children and youth to know what the difference is about our culture,” Khan told reporters in April. “It also has romance, history. [The show] has Islamic values.”

Khan ordered Pakistan’s national broadcaster to dub the series in Urdu. The dubbed version ran during the holy fasting month of Ramadan, which began on April 23.

Viewership skyrocketed during Ramadan, with research showing that most viewers were young Pakistani men. The first of the 150 dubbed episodes were watched by a record audience of nearly 56 million viewers in Pakistan.

In the eastern city of Lahore, residents erected a statue honouring the hero of the drama. The iron monument depicts a sword-wielding warrior on horseback.

Faisal Javed Khan, a senator and member of Khan’s Pakistan Tehrik-e Insaf (PTI) party, said the prime minister wanted the state broadcaster to televise another Turkish drama, Yunus Emre, which is based on the life of a 13th century Ottoman poet and mystic who was “wholly dedicated to Allah,” or God.

Professor Pervez Hoodbhoy, a distinguished professor at Forman Christian College-University in Lahore, says Pakistan has a “cultural vacuum coupled with incomplete identity formation.” He sees the prime minister’s promotion of such programs as part of an effort being made “to fill this void with characters alien to this land.”

“We first tried to become Arabs by taking inspiration from Arab heroes,” Hoodbhoy says. “But now that the Arabs have slightly moved towards liberalism, we are pinning our hopes on Turkey.”

“When people refuse to seek strength from their own history and culture, then they are doomed to forever look outward,” Hoodbhoy warns. He says cultural imports like Dirilis Ertugrul will push Pakistani society towards “narrow-mindedness.”

“It will further heighten our delusions and send us still further back looking for some glorious Islamic past,” Hoodbhoy says. “Young Pakistanis are being told that old glories can be reclaimed by taking up the sword or through sheer force of arms. There’s absolutely no realization that the true strength of those who dominate today’s world owes to their superior knowledge and scientific outlook.”

Jamal Shah, a veteran Pakistani actor and director, says the craze over Dirilis Ertugrul is dangerous because it is being used by Pakistani leaders to manipulate youth. “This drama is totally propagandist,” he says. “There is an impression inside Pakistan that in the West and in India there are widespread anti-Muslim sentiments. So, the authorities want to capitalize on that.”

Shah says the Pakistani state has long distorted the country’s history through literature and film. Among the most popular examples were the novels of Nasim Hijazi, whose fantasy novels that glorified Islam, Arab rulers, and holy war were promoted under Ziaul Haque in the 1980s.

“The same people who promoted novelists such as Nasim Hijazi are now sponsoring Ertugrul,” Shah says. “It is meant to alienate Pakistanis from their own culture and land. The confusion that this creates strengthens the establishment’s grip on power in Pakistan.”

Since coming to power after a disputed election in 2018, Khan has said he wants “to create a Pakistan which is in line with the first Muslim society created by the Prophet Muhammad in Medina,” the holy city in Saudi Arabia where Islam emerged in the seventh century.

Khan has found a partner in Turkish President Recep Tayyip Erdogan, who has attempted to impose Islamic values in the secular country. Critics of the autocratic Erdogan accuse him of having a pan-Islamist, neo-Ottoman agenda.

Erdogan has championed Dirilis Ertugrul and visited the film set. The writer and creator of the TV drama, Mehmet Bozdag, is a member of Erdogan’s Islamist-rooted AKP party.

The TV series has been banned by Turkey’s regional rivals Saudi Arabia, Egypt, and the United Arab Emirates.

In response, Riyadh is producing its own big-budget historical drama, Kingdom’s Of Fire, to counter the influence of Dirilis Ertugrul.

Ankara has been one of Islamabad’s staunchest allies, even as Pakistan has become internationally isolated over its support of extremist groups in neighbouring Afghanistan and India and its crackdowns on free media and religious minorities.

“The reason why the TV show is in Khan’s mind is because he has recently discovered that Turkey is one of the only Muslim countries that has stood up for Pakistan against India and has raised the Kashmir issue,” says Dr Ayesha Siddiqa, a Pakistani analyst and author. “There is a historic fascination with Turkey being the only country where Pakistan gets respected.”

India and Pakistan have fought two wars and a limited conflict over the disputed, Muslim-majority Himalayan region of Kashmir, which is divided between them. Both countries claim the region in full.

“There is also a pan-Islamic historical fascination which was there in Pakistan historically but has now started to resurface,” Siddiqa says. Courtesy: RFE/RL