After almost five years, the battle to dismantle Islamic State’s brutal “caliphate” has ended with an announcement from US-backed forces that the militants have been driven out of their last stronghold of Baghuz, deep in the Syrian desert.

Isis had held out for months against the Syrian Democratic Forces (SDF) in the small oasis town on the Euphrates river, clinging on to an area of land less than 700 sq metres wide despite fierce coalition bombing. But on Saturday an SDF spokesperson, Mustafa Bali, tweeted that the town had been liberated.

“On this unique day we commemorate thousands of martyrs whose efforts made the victory possible,” he wrote.

One of the group’s infamous black flags was ripped apart and trampled underfoot by SDF troops on the riverbank, also littered with shrapnel and discarded suicide belts. Kurdish pop music blasted from armoured cars and young male and female recruits danced and fired AK-47s in the air in celebration.

“Three days ago we clutched our weapons, trying to break forward even a few metres,” a fighter called Rami told AFP.

“But now we’ve finished with Isis and its black banner and we’ve hoisted our own instead.”

The elimination of the caliphate is a significant symbolic victory against Isis, which at the height of its power held more than 8 million people hostage to its bloody interpretation of Islamic law in a swath of territory across Syria and Iraq that was roughly the size of the UK.

The UK defence secretary, Gavin Williamson said: “This has been a long campaign ending the misery of millions, as [Isis] swept through Syria and Iraq, and came so close to taking the city of Baghdad. But due to the tireless efforts of our service personnel, we have been able to beat them back, depriving them of territory and making sure that Britain is safer.

“But we cannot be complacent. They’ve dispersed, and they’ll continue to pose a threat to Britain, and that is why we will always remain vigilant.”

His sentiments were echoed by the foreign secretary, Jeremy Hunt, who tweeted:

At least 11,000 SDF fighters, a Kurdish-led militia which includes Arab, Syriac and Turkmen units, have died in the four-year military campaign against the group in Syria. Tens of thousands more troops died across the border in Iraq, and monitors say the civilian death toll in both countries is far higher than official estimates.

Car, motorbike and even bicycle suicide bombs slowed the SDF’s advance in Baghuz to a crawl as Isis’ most committed and battle-hardened men – the majority believed to be foreigners from Iraq, Tunisia and Egypt as well as a handful of Europeans – fought to the death.

The offensive also ground to a halt several times as the militants’ wives and children poured out of the town in staggering numbers, the women defiantly shouting Isis slogans and threatening reporters.

Coalition intelligence had estimated Baghuz’s population to be 5,000 at the beginning of the operation in December, but 62,000 women and children have since arrived at displacement camps, overwhelming the local authorities.

Many of the children are suffering from malnutrition, hypothermia and trauma wounds: more than than 120 people, the vast majority infants, have died on arrival at the camps.

The fate of at least 300 Yazidi women and girls enslaved by Isis believed to still be in Baghuz when the town fell, as well as that of high-profile hostages kept by the group as bargaining chips, is unknown. 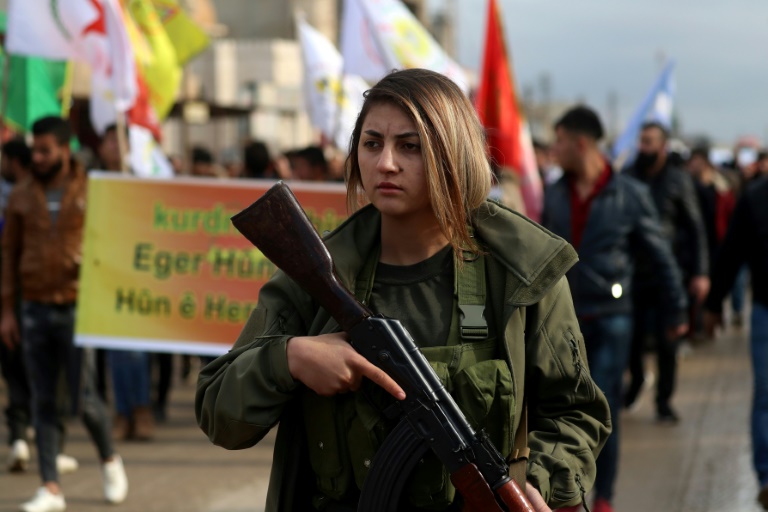 The announcement of victory in Baghuz was somewhat undercut by reports of sporadic gunfire and shelling on Saturday near cliffs on the town’s eastern edge. On Friday another SDF spokesperson, Kino Gabriel, had said clearing operations to drive out fighters hiding in caves there were still under way. Airstrikes pounded the area overnight.

The SDF, which had been preparing for a victory announcement for weeks – even building a stage at the operation’s base – was robbed of a more climactic victory moment when the White House press secretary, Sarah Sanders, told reporters on Friday that the acting defence secretary, Patrick Shanahan, had briefed Donald Trump that Isis had been completely territorially defeated.

SDF soldiers and international coalition commanders celebrated the collapse of the caliphate on Saturday but they remain under no illusions that Isis has already morphed back into an insurgency which continues to pose a serious threat in a country still mired in an intractable civil war.

The militants have carried out dozens of sleeper cell attacks in recently liberated towns and villages along the Euphrates river corridor as well as in their former capital Raqqa. Since the Baghdad government declared Isis’s defeat in Iraq in 2017, the group has carried out more than 1,000 attacks there.

As the fight against Isis enters a new chapter, attention is increasingly turning to the complex issues surrounding any extradition or justice proceedings for captured fighters, as well as women and children. Most western governments are reticent to repatriate their citizens, fearing they will not be able to bring adequate charges against them – but the Kurdish administration in north-east Syria has stressed it does not have the resources to hold or try approximately 800 foreign men currently in their custody.

Some 3,000 children born to foreign nationals are currently being held in detention camps across Kurdish-held Syria, most of them stateless. Without sustained support and education the families remain extremely vulnerable to radicalisation, rights groups say.–Agencies