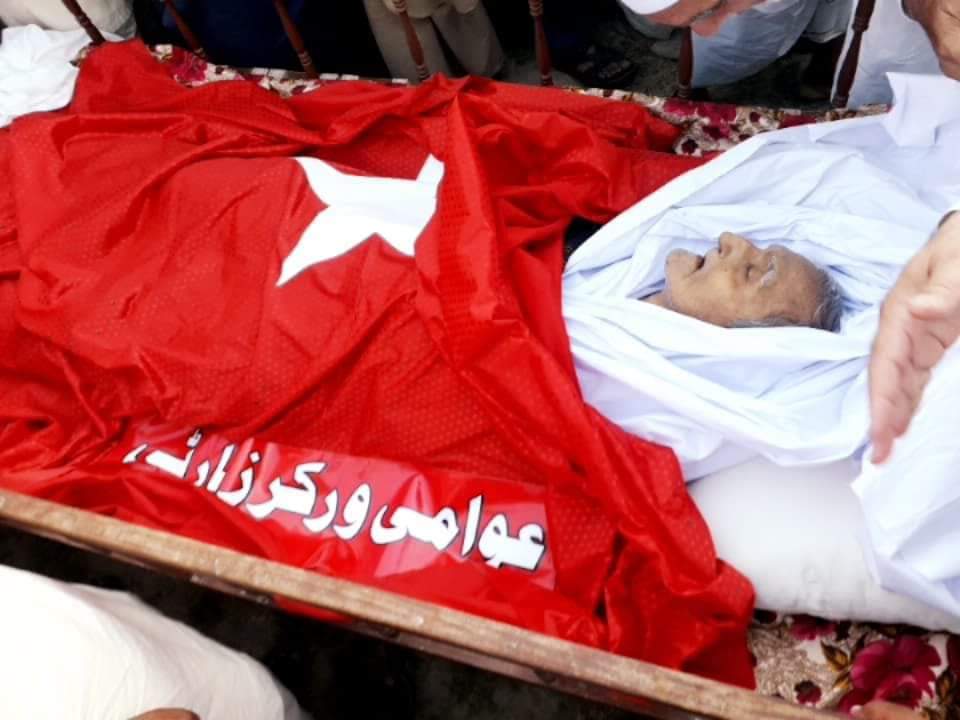 TOBA TEK SINGH/Islamabad: Veteran socialist leader and founding member of the Awami Workers Party Chaudhry Fateh Mohammed, the oldest beacon of Left and peasant movement goes out. Draped in the party’s red and white flag, he was laid to rest at his native town at Toba Tek Singh, the bastion of the peasant movement in Punjab on Monday amid revolutionary slogans.

He remained committed to his socialist ideals and the cause of the wretched of the earth till the last breath of his life. He lost the battle against cancer at the age of 97 at about 4am on Monday.  His funeral procession was attended by hundreds of people, including AWP officeholders, peasant and trade union workers, literati, and legislators.

The party also expressed grief over the passing of trade union leader Yusuf Baloch earlier during the Eid weekend.

“The party leadership and workers are saddened at the passing of the two leaders who remained committed to the causes of the working class and peasants till the last breath of their lives.

“The party pays homage to the life, struggle and sacrifices of the two leaders and reaffirms the commitment to carry forward their legacies and struggle for the emancipation of working people, oppressed religious/ethnic minorities, women, girls and the wretched of the earth more generally.

Chaudhry Fateh Muhammad was born in a small village Chaharke near Jullundur in 1925. He migrated to Pakistan in 1947 and settled in a village Chak 305-GB in Toba Tek Singh, a centre of Kissan movement in Punjab.

He joined the Communist Party of Pakistan (CPP) in 1948 and was elected member of the Central Committee of Pakistan Trade Union Federation (PTUF) in 1950. Faiz Ahmed Faiz was re-elected as vice-president and Mirza Mohammad Ibrahim as president of PTUF.

He was jailed twice for his activism during the first martial law regime of General Ayub Khan. He was kept in the infamous Lahore Fort (then Lahore Jail) and Lyallpur Jail during which he developed a strong bond with Faiz Ahmed Faiz.

With the outlawing of the CPP and upon his release, Chaudhry Fateh and his fellow comrades joined Mian Iftikharuddin to form the Azad Pakistan Party which was later merged in the National Awami Party (NAP) at the Dhaka congress on September 25, 1957.

Chaudhry Fateh was imprisoned for several years and also tortured in the notorious Lahore Fort prison during the Gen Zia regime.

Upon his release from jail, he devoted himself to organising peasants’ conferences which culminated in the historic Kisan Conference on 22nd March 1970 at Toba Tek Singh. Organised and supported by the major progressive and Left figures, including Faiz and attended by over 300,000 people, the conference played a major role in initiating land reforms and in the future politics of Pakistan.

Convinced in his belief that a united political party of the Left is vital for any social change, Chaudhry sb was instrumental in helping to bring about the merger of three Left parties/groups that created the AWP in 2012.

Widely respected for his political principles, internationalism, boundless energy and optimism in a brighter and egalitarian future, Choudhry Fateh remained an inspirational and committed activist for peasants’ rights through the decades of ravages that progressive movements have suffered in Pakistan.

On the nomination of the Pakistan-American Democratic Forum, he was awarded Faiz Ahmed Faiz Award in 2011 by the poet’s daughter Salima Hashmi in London in recognition of his ‘lifelong struggle against feudalism, militarism and imperialism’. He was the third Pakistani after renowned writer, journalist and activist Tariq Ali and AWP founding president Abid Hassan Minto to receive this award.

The late leader was the founding president of Pakistan Kisan Committee when it was formed in 2007.

CPIM: Communist Party of India-Marxist (CPIM) UK general secretary Harsev Bains in a condolence message to Pervez Fateh, AWP UK leader and son of the late leader, wrote: “Dear Comrade, [I’m] extremely saddened to learn of the passing away of your dear father. His loss will be felt by the Peasant and working-class movement.

“His life as I have come to learn was inspirational. Chaudhry Ji lived a life worth living in the service of others. To work towards the emancipation of peasants through his direct interactions as the veteran revolutionary leader of the Kisan movement in Pakistan,” the letter read.

“On behalf of the CPIM and our organisation in Britain, we salute our dearest leader Comrade Fateh Mohammed role in encouraging you and other members of the family to devote your lives to the most wonderful cause in the world the emancipation of humanity is exemplary.

“On behalf of Preet and I please accept our sincerest heartfelt condolences. Our thoughts are with you and the family at this very difficult time.

Please convey our sympathies and solidarity to the Leaders of the Kisan movement and all family and friends,” the letter concluded.

Minto: AWP founding President Abid Hassan Minto and old comrade of the late peasant leader could not attend the funeral rites because of his health reasons. In his condolence message, he said: “Its hard to put into words my grief on the passing of Chaudhry saheb, who was a great comrade and a genuine working-class revolutionary. For me, his death is like separation of an arm of my body. But his cherished memories, the unmatched struggle will always remain with us and inspire the younger generation”.

Recalling his six decades association with Chaudhry Fateh, Mr Minto said he not only belonged to the working-class family but also an educated and conscientious peasant leader who had a vast knowledge of the history, understanding of the working class issues and struggle for their rights. He dreamed of a social change in Pakistan and struggled for it throughout his life.

Mr Minto said Chaudhry sb played a key role in organising the peasant movement throughout the country and the historic Toba Tek Singh Kisan Conference in 1970 that not only set the stage for the remarkable victories of socialist candidates across Pakistan in the general elections but for two successive land reform legislations in 1972 and 1977.

“I salute his struggle and sacrifices and hope that his children and the party leadership and workers will carry on his mission,” Mr Minto said.

AWP President Yousuf Mustikhan said Chaudhry was an inspiration for all the progressive political activists as he remained committed to his ideals.

AWP secretary-general Akhtar Hussain Advocate in his condolence message said: “It’s a great loss not only to the party but the whole progressive and peasant movements.” Choudhry Fateh Muhammad struggled for the abolition of feudalism.

AWP Deputy Secretary-general Ismat Shahjehan paid tribute to the lifelong struggle of Comrade Fateh Muhammad who remained committed to the cause of peasants till the last breath of his life.

“We will carry forward his legacy and continue the struggle for the rights of the oppressed nations, women, and minorities and for establishing a society free from exploitation and oppression,” she commented.

Dr Asim Sajjad, academic and columnist and member Federal Committee, said the history of the Left politics in Pakistani Punjab is both heroic and complex. Long decried as a bastion of the establishment, Punjab has nevertheless produced its fair share of revolutionaries that have suffered the excesses of state coercion and class power.

Chaudhry Fateh belonged to a bygone generation that dedicated their entire lives to the building of a socialist alternative. We pay tribute to his struggle and live to carry on a legacy of a revolutionary Punjab that stands with oppressed ethnic-nations, women and its own exploited classes.

“We the comrades of Khyber-Pakhtunkhwa are deeply aggrieved on the death of Chaudhry Fateh Mohammed, who struggled for the rights of the peasants for many decades,” said Haider Zaman Akhundzada, President, KP chapter of the AWP

“Today one of the Left’s guiding lights, revolutionary Kisan and trade union leader and co-founder of Awami Workers Party. He spent seven decades in revolutionary struggle and laid the foundation for the peasant movement in Punjab.

“He dedicated his entire life in service to the revolutionary struggle for socialism and leaves a rich and enduring legacy of grassroots struggle against feudalism and capitalism.

They said that Comrade Fateh devoted his entire life to the establishment of socialism for seven decades and struggled against capitalism and feudalism.

PWA: The working committee of the Progressive Writers Association and former central secretary-general of the PWA Dr Jaffer Ahmed has also expressed deep sorrow and grief over the demise of the revolutionary leader.

In a joint statement, they said: “There are unforgettable characters in history who have done a great deal of organizational work in the farmers ‘and other workers’ organizations.”

He wrote a detailed account of such efforts years ago in his book which we have preserved for future generations. The role of Chaudhry Fateh in raising public awareness in Pakistan will always be remembered, he commented.

Shakeel Chaudhary, station director, Radio Pakistan Mirpur, AJK in a condolence message said: “Chaudhry Fateh Muhammad’s departure is sad news for few but a loss for many. He was a great human being, selfless warrior, champion of human rights who lived for the have-nots. Generally, we don’t know how much poor a society becomes after the departure of such committed and dedicated souls.

Chaudhry was a true son of the soil who made his native land an epicentre of progressive thoughts, enlightenment, and sacrifice. It is a personal loss and painful reality bit difficult to absorb.

Yusuf Baloch was the Chairman of the Pakistan Workers Federation, the biggest confederating body of trade unions in the country. He was also a long-time leader of the renowned Railways Workers Union, and a companion of the legendary Mirza Ibrahim, making him a long-time leftist who came of age during the heady revolutionary upheavals of the 1960s and 1970s.

With the fall of the Soviet Union and the decline of the organized labour movement, Yusuf Baloch kept the revolutionary flag flying as a leader of the Labour Party Pakistan (LPP), one of the component parties that came together to form the AWP in 2012. He also remained part of the Railways trade union resistance to the regime of ex DG ISI General Javed Ashraf who was appointed Railways minister during the Musharraf dictatorship.