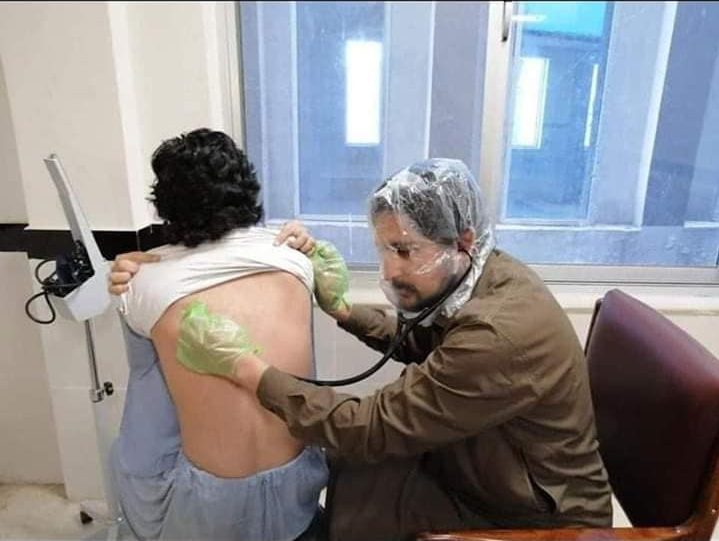 In the face of one of the worst situations humankind has faced ever, in the form Covid-19, there is a need for solidarity among all the world nations. They need to help each other as the sufferings cannot be mitigated by isolated efforts. The exigency resulting from the current crisis necessitates maximal volunteer services to cope with emergent healthcare needs, especially of the poor nations.

One is truly bewildered what the poor nations can do with the rickety healthcare systems they might have at this juncture as it’s requiring extraordinary efforts to mitigate situations. Sadly, despite immense progress witnessed by humankind in science and technology, the global healthcare landscape is still cumulatively pathetic as the current pandemic scenario has brought it to the fore. Take the example of the developed world. It is said that the US has about 170،000 ventilators but the experts there are worried about a shortfall since as many as 1 million Americans may need to be placed on ventilators at some point.

In Italy, the situation is even direr. This dearth is to such an extent that the doctors have had to choose between which of the patients should get a ventilator to avert death.

In a situation like this, Pakistan like any other poor country will need more ventilators and that too, so fast to come to grip with the emergent requirements. According to the National Disaster Management Authority (NDMA) chairman, there are currently 200 ventilators in all of Pakistan. Half of these would be available for Covid-19 patients whereas 10,000 additional ventilators are being acquired.

Still, the quantity is too insufficient and thus, the scenario which prompted the creative minds to work to develop and come up with cost-effective, emergency ventilators with efforts to improve material quality and function with each prototype. For instance, Drue Placette of CAN opener Labs, Santiago is reportedly working with a team, which includes computer software students, doctors to come up with a prototype. It is aimed to develop rapidly made solution.

“It has been the fifth prototype the group has designed. With each prototype, the group improves the material quality and function.”

Likewise, a group of dedicated Pakistanis from all over the country have reportedly developed, effective, cheap, practicable solutions in the face of the current pandemic. The group reportedly consists of bio-medical professionals, engineers, educational experts, diasporas, resource-mobilizes and other smaller groups. They aim to generate funds on ‘self-help’ basis with a view to producing 3D printing and manufacturing ventilators, valves etc., to respond to the needs locally. This is the primary objective of the group of the experts not only to produce ventilators designed exclusively for the Covid-19 affected patients but also to provide oxygen to four patients from one machine at the same time saying they have made progress to some extent.

Unveiling the plan, Fawad Bajwa, the spokesperson for the group is referred to as saying that Dr Bilal Siddiqui is leading the group of the volunteers to supply medical equipment in the event of the Coronavirus spread. Bilal and other volunteers were much alarmed at the probable spread of the virus in Pakistan in seeing that currently the healthcare system unable to cope with situations ahead faced an immense pressure.

Meantime, a professor from Mardan is reported to have claimed the preparation of a cheap sanitizer in seeing that main problem associated with Covid-19 is its passing from one person to the other so quickly which brings it to the fore the significance of preventing its spread in order to contain it pursuant to the containment and prevention protocols.

Another development in the news is that the Rawalpindi Institute of Cardiology has come up with the solution of the multi-oxygenating device meaning it can extend oxygen to four or even more patients at a time from a single facility.

In the matter of current ventilation facilities in the country, it is said that there are about 150 ventilators in KP, 49 In Balochistan, nearly 1,300 in Punjab, (250 in public hospitals in Lahore alone). However, the Lahore Kidney and Liver Institute which is a state-of-the-art facility having 100 new ventilators, private sector hospitals in Lahore have 475 ventilators.

This makes it well construable what the situation could be in the peripheral areas like Gilgit-Baltistan in terms of the healthcare system. The GB’s Chief Minister Hafeezur Rehman during an interview to a TV channel said the other day that the region in the face of the worst pandemic, confronting the difficulty of testing as there is only one laboratory in GB currently which does not suffice the need of at least enhancing the capacity to 200 to 300 tests daily.

The total number of ventilators in GB is put around 30 to 35. It is to be recalled that China has recently delivered a consignment of medical equipment. The CM said that personal protection kits have been issued invariably to all the medics and paramedics. It is to be borne in mind that the region lacks any state-of-the-art facility with there being no single medical college, let alone medical university. The rickety healthcare system of the region, therefore, needs prompt attention for taking expeditious measures.

Reverting to the ongoing efforts of the Pakistani group of experts trying to come up with cheap ventilators prototype, their success will certainly prove a ‘game changer’ in the fight against Covid-19 in Pakistan and other developing countries. Let it be hoped that the programme will see the light of the day soon and they will be successful enough in achieving their dream of making the facility available to at least less severe cases of Covid-19 to alleviate some pressure on the ICUs. One may hope that the efforts on finding local solutions may benefit the people of GB as well that are facing the global pandemic while being completely resourceless at the present.

Syed Shamsuddin is a Gilgit-based freelance contributor, blogger. He can be reached at: [email protected]

Take control of your knee pain

Knee pain is the most common health issue in mountain regions and urban centres alike. Bu…