The Moon: A Voyage Through Time explores wonder, knowledge, and beauty inspired by the moon through the ages

The Apollo 11 lunar landing on July 20, 1969, was a transformative event for humanity, yet the moon has captivated cultures since the dawn of civilization. The Moon: A Voyage Through Time is a major new exhibition opening March 9 at the Aga Khan Museum. It pays tribute to our timeless fascination with the moon by exploring how it has inspired spiritual growth, scientific discovery, and artistic creativity. 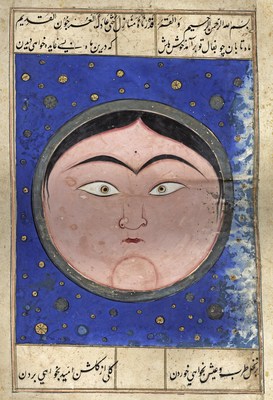 Spanning pre-Islamic times to the present day, and delving into faith, science, and the arts, The Moon: A Voyage Through Time assembles ancient artifacts, important miniature paintings, scientific instruments, Islamic manuscripts, and contemporary art. Together these artworks reveal the many roles the moon has played across cultures of the Muslim world, whether as a timekeeper, a source of inspiration for poets and artists, or an emblem of the divine.

“To voyage to the moon, you first have to be fascinated and captivated by its continuous and ever-changing presence in the night sky, something that is shared by all cultures, across time and across the world,” says Henry Kim, Director and CEO of the Aga Khan Museum. “I am pleased the Aga Khan Museum can present this exhibition reflecting our role in bringing people together to celebrate shared experiences.”

Organized into five thematic zones – the moon is ancient, the moon is wonder, the moon is knowledge, the moon is beauty, and the moon is eternal – the exhibition combines historical and contemporary objects with displays and interactives that invite visitors to observe and imagine the moon in new and unexpected ways. In addition to the opportunity to stand on an actual piece of the moon, visitors will be able to view, from multiple perspectives, a spectacular giant sculpture entitled Moon. Created by contemporary British artist Luke Jerram, the internally illuminated replica moon features detailed NASA imagery of the lunar surface, includes a sound composition by BAFTA-winning composer Dan Jones, and measures five metres in diameter.

“We’re thrilled to put historical objects ‘in conversation’ with iconic scientific images, such as those taken from the Lunar Reconnaissance Orbiter, NASA’s robotic spacecraft,” says Dr. Gruber. “We hope the exhibition will be an uplifting experience for visitors, and will inspire adults and children to learn more about the moon in Islamic culture and the arts.”

To complement the exhibition, there will be a special selection of moon-related objects in the Museum’s Permanent Collection gallery, including a 14th-century Spanish astrolabe bearing inscriptions in Latin, Hebrew, and Arabic. Astrolabes serve various computational and navigational purposes, and can help track the moon’s cycle.

Moon: A Voyage Through Time will continue until August 18, 2019, and will be accompanied by related programming, including March Break hands-on activities for families, insight tours of the exhibition, talks, workshops, a Moon Mission summer camp for children, and a spoken word/poetry performance series called MoonVerse.

The Aga Khan Museum in Toronto, Canada, has been established and developed by the Aga Khan Trust for Culture (AKTC), which is an agency of the Aga Khan Development Network (AKDN). The Museum’s mission is to foster a greater understanding and appreciation of the contribution that Muslim civilizations have made to world heritage while often reflecting, through both its permanent and temporary exhibitions, how cultures connect with one another. Designed by architect Fumihiko Maki, the Museum shares a 6.8-hectare site with Toronto’s Ismaili Centre, which was designed by architect Charles Correa. The surrounding landscaped park was designed by landscape architect Vladimir Djurovic.

This feature was first published in Morning Star, Toronto, Feb 14, 2019