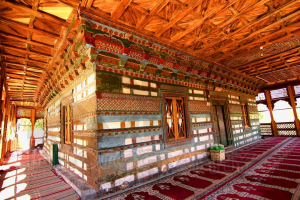 SKARDU, May 2: A top army officer has said that ban on entry of tourists in restricted zones in Baltistan has been lifted to promote tourism in the region.

“There were restricton on entry of domestic and foreign tourists in Kharmang, Tchorbat, Siachen, Gultary and Astore valleys which have now been lifted,” announced Force Commander Gilgit Baltistan Maj-General Ahsan Mehmood while addressing a conference on tourism, law and order and development of the division here on Thursday.

“Now tourists can visit Kharmang valley up to Khamosh (silent) waterfall, Gultary and  Minimarg in Astore as well,” he added.

The conference was attended by people’s representatives, chief secretary of the region, heads of various departments, civil and military officials of Baltistan division and its five districts, religious figures, notables, political and social workers of the region.

Gen Mehmood further  said that the army has also been contributing towards the development of health and education and communication sectors in Gilgit-Baltistan. FWO is constructing and repairing  bridges and road infrastructure to provide better communication facilities to the people.

Force commander further said that the people of GB are peace-loving and patriotic people.

The region’s chief secretary Capt (Retired)  Khurram Agha said the government was giving emphasis on development of social sector and promotion of tourism in Baltistan. He said, concrete steps have been taken to solve the water and power crises in Baltistan especially in Skardu. “The International Fund for Agricultre Development (IFAD) operation has been extended to the entire GB so that maximum population could benefit from the initiative,” he said.

Secretary Planning  and Development Syed Abrar Hussain said, in power sector, the 13MW Harpo-Rondu hydropower station has been approved. If completed, the project will resolve power crisis. Besides, eight diesel generators are also being provided to Skardu district which will generate 8MW.

He further said that steps are being taken to work on Skardu Development Authority and some other important projects.

Secretary Works Khadim Hussain said, a bypass road will be constructed to ease the vehicular traffic congestion in the divisional capital city, adding construction and recarpeting of all link roads will be completed by the end of current year.

Earlier, the participants of the conference discussed various issues of the region and gave suggestions for their solution.