When she tweeted out a customary Arabic prayer to mourn for the victims of the New Zealand mosque attack, Ilhan Omar was singled out by a major news outlet. A click-bait headline read, “Ilhan Omar shares Muslim verse….”

The Democratic Congresswoman from Minnesota is frequently over-scrutinized, misrepresented, and vilified, just for being who she is. She is the first black, Muslim woman ever to be elected to the US Congress. But to her supporters, she represents something extraordinary. She is not just the most visible symbol of the “blue Muslim wave” that swept across US public offices during the 2018 mid-term elections (blue refers to the Democratic party), but also an unapologetic voice tackling tough subjects and disrupting status-quo notions about what it means to be an American.

And so, Omar refused to let it pass. She asked the news outlet, The Hill, why it was so controversial for Muslims to pray for their dead, censured it to do better, and signed off with a face-palm, and an “Astaghfirullah.”

Anti-Muslim rhetoric has been one of the hallmarks of political campaigning ever-since President Donald Trump’s election in 2016, more so than even after 9/11. But the vitriol has had the inverse effect of re-invigorating identities that may have previously been lying dormant. As Muslims find themselves under a harsher spotlight and witness how hateful rhetoric can also be translated into anti-Muslim policies, such as the still-enforced Muslim ban, more and more of them are checking into the ‘Muslim’ part of their American-Muslim identity and carrying it forward into the political space. By doing so, they are attempting to shape a new public discourse in America.

“Thanks, President Trump,” wrote Dean Obeidallah, comedian and political commentator. “… a lot of them probably would have never been inspired to run without you.” 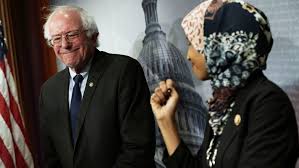 Now, with an eye towards the 2020 presidential election, grassroots Muslim groups are continuing community-organizing efforts. MPower Change, for example, is starting a #MuslimVote drive to help register voters. Other leaders are helping connect Muslim voters to their politicians on a local level and sharing knowledge about their representatives’ stances on issues important to the community. “I’ve always said you get what you organize for,” Omar had told a jubilant crowd on the eve of her victory in 2018.

While Muslims make up only 1 percent of the US population, not a large enough demographic to be courted seriously, their support is still important. Along with the intense negative focus on their community for the past several years, a push back has also occurred, with being pro-Muslim seen as being most progressive. This shift has been made possible largely through grassroots efforts. The Bengali-Muslim community of Queens played an important role in the election of Congresswoman Alexandria Ocasio-Cortez from New York, and the Somali Muslim community of Minneapolis helped elect Ilhan Omar. Both are loud, progressive voices who have brought minority issues to the national stage and are pushing the Democratic party to tilt further left.

For now, 20 people are vying for the presidential nomination from the Democratic party — a historically diverse group of people that signifies the evolving political landscape of the country, with six women and an equal number of color persons (as minorities are commonly known in the US). Still, it is Joe Biden, 76, and Bernie Sanders, 77 — both white men — who appear to be the frontrunners. Both also seem to be drawing a huge chunk of their support from minority groups, according to polls.

And yet, the two couldn’t be more different. Mr Sanders is leading a grassroots campaign that refuses to take money from big corporations and wealthy people with an average donation of just $14 last month and 84 percent of donations coming from people giving less than $200. Biden, who joined the race late, is already leaping ahead, thanks to wealthy donors. Sanders identifies as a democratic socialist, talks about major policy changes such as health coverage for all, free education and taxing the super-wealthy. He is also viewed most negatively by establishment Democrats. Biden, on the other hand, represents the old, solid, middle ground values, with policies that are more accommodating towards the establishment and the billionaire class, usually labelled nicely as ‘bipartisan’. He is running on a more generic campaign to save the “soul of America.”

The manner in which they deal with Islamophobia is also in sharp contrast. When Ilhan Omar spoke at a Council on American-Islamic Relations event, a four-word phrase buried half-way through her speech was stripped of context and splashed on the front page of ‘The New York Post’ with an inflammatory headline (she had said, speaking of 9/11, that “some people did something and …all of us were starting to lose access to our civil liberties”). Trump also joined in, tweeting a video of the burning Twin Towers spliced with images of Ilhan Omar, resulting in an increase in the number of death threats against her.

Sanders was one of the few Democratic candidates to step forward with the strongest words of condemnation for the hate campaign against Omar, along with Massachusetts Senator and presidential candidate Elizabeth Warren. Joe Biden offered no comment.

The perfect Democratic candidate would be one with a strong economic and social justice message along with an unflinching resolve to tackle Islamophobia. For now, Mr Sanders seems to embody this vision in a way that is resonating strongly with American Muslims

American Muslims believe that jobs and the economy are important issues facing the country today, according to a 2017 survey by the Institute for Social Policy and Understanding. At the same time, the survey also showed increased anxieties around Islamophobia, with almost half of American Muslim children reporting that they had experienced bullying or discrimination in school. The perfect Democratic candidate would be one with a strong economic and social justice message along with an unflinching resolve to tackle Islamophobia.

For now, Mr Sanders seems to embody this vision in a way that is resonating strongly with American Muslims, especially among younger voters, who have been enthusiastically participating in his campaign since his 2016 bid for the presidency. To top it off, his new campaign manager is Pakistani-American Faiz Shakir, the first ever Muslim to run a major presidential campaign. It is interesting that a re-invigoration of identity politics among young Muslims is coalescing around an old, white, Jewish man.

Why this is so, was demonstrated during an emotional exchange at a town hall event, when a young Muslim girl asked Mr Sanders what he would do about Islamophobia as US president? “Let me be very personal. I am Jewish,” he said after hugging her, immediately connecting her distress to his family’s experience in concentration camps during the Holocaust. In this manner, Sanders illustrated that Islamophobia and anti-Semitism are two sides of the same coin and that anti-immigration, anti-black racism, and all other such discriminations are the same.

Back in Minnesota this past week, in a setting a world apart from the stiff corridors of Washington D.C, a welcome break came for Omar and a touching reminder of what she represents. Hundreds of excited schoolchildren lined up and cheered for her, holding banners and reaching with their arms, squealing with joy as their fingers touched Omar’s, who herself had come to this country as a 12-year-old refugee girl from Somalia, one of the Muslim-majority countries currently banned from US soil.

“This is the same school where I voted for Ilhan Omar last fall,” someone tweeted. These are my neighbors’ kids. You can try to reduce her to a caricature all you want, but we know who we elected, and why she matters.”

Maria Tirmizi is a media professional with experience in journalism and non-profit communications. She is interested in topics related to minorities in the US and Pakistan.