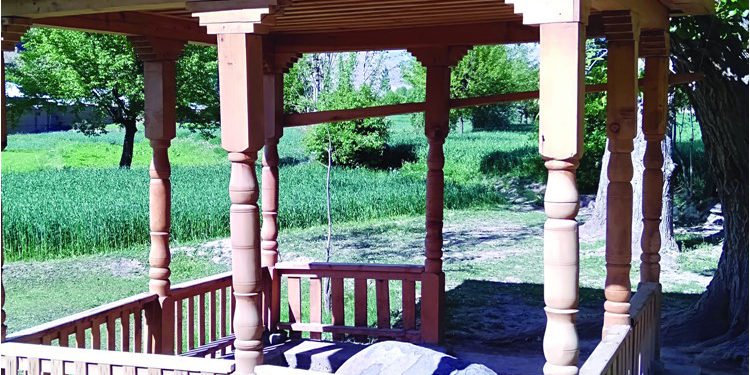 Khyber-Pakhtunkhwa was once Gandhara, one of the earliest centres of Buddhism. The Peshawar Valley, in particular, has several archaeological sites dating to the Buddhist era with Takht Bhai in Mardan and Ranigat in Swabi being among the most well known. Further North lies Swat, once known as Udayana, which is covered in relics from the Buddhist era with ruined monasteries and stupas present throughout the lower part of the valley. Further to the northeast, Gilgit-Baltistan has some spectacular Buddhist rock engravings along the Indus in Diamer and Skardu and just outside Gilgit City.

In between these regions lies Chitral, where there are three archaeological sites related to the Buddhist tradition, which are not well known to the outside world. The Buddhist history of Chitral was long forgotten before the esteemed archaeologist and well known orientalist Sir Aurel Stein paid several visits to the valley in the early 1900s and uncovered this hidden story.

The Buddhist history of Chitral may be a little known aspect of the valley but the entire world knows about our most famous inhabitants, the Kalash. Prior to the 1400s the Kalash were the dominant ethnic group of Lower Chitral. The village of Broze, a few kilometers south of Chitral Town, seemed to be the dividing line between the Kalash and Kho majority regions. The Kho, the major ethnic group of Chitral, are thought to have their origins in the Tor-Kho and Mul-Kho valleys of Upper Chitral and from there have expanded throughout Upper and Lower Chitral as well as across the Shandur to Ghizer. Before the Kho expansion, the southern part of Chitral was a Kalash kingdom, whose beliefs revolved around the same shamanistic form of Vedic Animism that their descendants still adhere too. An interesting point is that there are no Buddhist relics in the erstwhile Kalash dominated parts of Chitral. It can be deduced that the Kalash have always been a very isolated and insular people, lacking contacts with the wider region. Due to this factor Chitral was never a significant part of the larger Gandhara culture.

Even south of the Lowari Pass, the number of Buddhist sites is far fewer than those in the northernmost parts of Dir and Swat – regions known as Dir and Swat Kohistan. These regions are even today inhabited by the Kohistani people, a group of Dardic Indo-Aryans linguistically linked to Chitral and Gilgit. Prior to Islam the Kohistanis also followed a Vedic inspired faith similar to that of the Kalash. These tribal Indo-Aryans seemed to have resisted the spread of Buddhism.

This leads to a very interesting question. If these non-Buddhist groups inhabited the entire region from Kunar to Kashmir during the peak of the Gandharan Buddhist era, how did Buddhism spread further North? Perhaps one reason may be that although they did not convert themselves they had no qualms about Buddhist monks and missionaries traveling through their respective polities. Another explanation is that alternate routes were taken. It is well known that Buddhism reached Gilgit, Baltistan and Ladakh via Kashmir, rather than directly from Gandhara. Similarly Buddhism was introduced to Central Asia and China via the Silk Road which, contrary to the popular view in Pakistan today, actually by passed the difficult terrain of the Karakorams. The established route from Gandhara to Central Asia was through the low passes between the Peshawar Valley and Afghanistan and onwards through Bamiyan to Balkh. From Balkh and Badakhshan caravans would follow the Oxus up through the Wakhan to the Wakhjir Pass and onwards to Xinjiang. In fact, Xinjiang became a major centre of Buddhism, mostly of the Mahayana sect, and rivaled and ultimately surpassed Gandhara as a centre of that faith. It is from Xinjiang that Buddhism reached the Kho of Upper Chitral, following the same route along the Oxus Valley and down through the Boroghil Pass.

Sir Aurel Stein made several visits to Chitral State during the rule of my Great Great Grandfather Mehtar Sir Shujaul Mulk. He was very impressed by what he observed in Chitral: that despite its isolated and remote position, it was a centre of civilization. Most of these visits were en route to Xinjiang, then the Sinkiang Governorate of the Qing Empire of China. It is during these expeditions that he was able to pinpoint three Buddhist era rock engravings in Chitral territory. He was able to see two of them in person and wrote about a third.

These three sites are: Pakhtordini, opposite Barenis in Lower Chitral and Charun and Rayin in Upper Chitral. These sites had never been forgotten or lost, in fact two of them lie right in the middle of bustling villages. All three are known as “Qalamdar Botini Bokht” in Khowar, translated as “the Rocks Where the Qalandars Were Bound 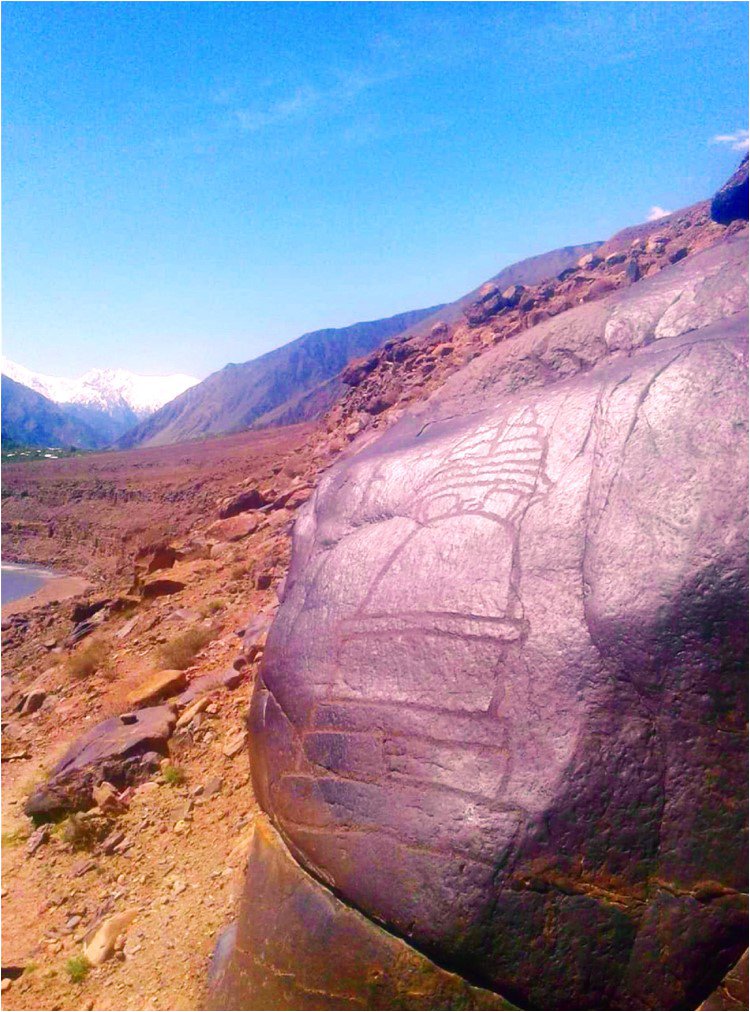 ”. Local Sufi folk beliefs had given them an Islamic character by transforming them from engravings of stupas to places where wandering Sufi saints had encountered and subdued local demons. Interestingly I have visited stupas in Nepal and Bhutan where the exact same story is told, albeit with Buddhist Gurus like Padmasambhava and Milarepa instead of Sufis. After the introduction of Islam, the old stories about wandering magical monks subduing malevolent entities were replaced with Sufis, so as to make the stories – and subsequently paying ones respects at the holy places – halal!

Although he did not discover any carvings or stupas in Chitral himself, Aurel Stein has to be credited with uncovering the Buddhist heritage of Chitral by doing two key things. Firstly by examining the carvings he saw that the stupa designs were identical to those that he had seen in Xinjiang. Thus he was able to draw the conclusio

n that Buddhism had spread to Chitral from the northeast via the Oxus Valley rather than directly from Gandhara. Secondly, he translated what was written on the two engravings that he was able to visit in person.

The first and largest of these rock carvings is located in the village of Rayin in the Tor-Kho Valley of the newly created district of Upper Chitral at the point where the Tor-Kho stream merges with the larger Terich river. The Rayin carving lies right on the main Tor-Kho road and is inscribed upon a large boulder. It is the largest of the three such engravings in Chitral and the depiction of the stupa is about seven feet in height, etched upon a large slanted boulder. It portrays a stupa with decorative motifs at the top, these are somewhat anthropomorphic and the locals claim that it is a picture of the creature that a Sufi saint subdued long ago. I have visited this location several times, most recently in 2017 and am glad to report that it is still in good condition. It has not been accurately dated nor has the extensive inscription been translated but to the untrained eye it looks very similar to the other two further South and may have been built by the same ruler who’s name we know thanks to Sir Aurel Stein.

The next stupa engraving is in the Village of Charun, the second major village in Upper Chitral as one enters from Lower Chitral. I had the opportunity to see this relic earlier this month. As I was on my way to the Mul-Kho Valley to pay a condolence visit, I had to stop my vehicle to wait for my Secretary, the wonderfully named and entitled Inspector (Rtd.) Nishaan-e-Haidar, who was driving behind us and was yet to catch up. Thus I asked around about the whereabouts of the stupa engraving and went to have a look. A year earlier the Archaeology Department had erected a gazebo over the rock to preserve it. Upon seeing me and hearing who I was the locals showed up with “darkhwasts” (requests) to be appointed as caretakers for the relic and to receive official salaries. After the awe inspiring Rayin inscription the one at Charun is a bit disappointing. It is engraved upon a rock protruding about three feet from the ground and is highly weathered, with half of the inscription and engraving missing. This is to be expected as it lies in an open field has been subjected to flood irrigation for centuries. Aurel Stein wrote that it was in the same state of disrepair a hundred years ago. He states that the stupa engraving is of the same shape and construction as those seen North of the Hindukush watershed ie in Central Asia and quite distinct from those found in Gandhara and the rest of South Asia. His most important work though was his deciphering of the inscription, which reads Raja Jivarmana. Now, Jivarmana is the Pali form of the Sanskrit name Jayavarman. Here, the name of a ruler from the 5th century AD was discovered. This is the oldest name preserved in Chitral, it is through this inscription that our ancestors speak to us and just the name alone is an entire historical document in itself. Before this discovery only a handful of royal names from the pre-Islamic era had been preserved in the oral history of Chitral. These include the Kalash Raja Wai and Bula Singh and the Kho Bahmaan and Sumalek. Raja Jivarmana though has left his mark on history in a far more concrete manner than these later kings.

The third and perhaps best preserved site is in a location called Pakhtordini, beyond Prait and opposite Barenis, the last major village of Lower Chitral. This is also the least known of the three sites, as it is difficult to access. In April I sent one of the managers of my hotel, Fida Hussain, who is also an intrepid trekking guide, to observe the engravings and take some pictures. Stein again says that it is of the same architectural design as the stupas in Kashgar and Khotan, which he calls the Bactrian Style as opposed to the Gandharan Style. He also deciphered the Sanskrit inscription which reads, Devadharmo’yam Rajajivarmanah  translated as “This is an offering to the divinities by Raja Jivarmana.” From his observations we can conclude that the region of Lower Chitral above Chitral Town and the adjacent parts of Upper Chitral were ruled by a devoutly Buddhist king named Jivarmana in the 5th century AD. He was probably a Kho and perhaps belonged to an ancient indigenous dynasty which was supplanted by the dynasty of Bahman and later Sumalek, who bear Iranic names as opposed to the Indic Jivarmana. Interestingly the name Varman, meaning armour, appears mostly in royal names at the edges of the Indic world, among Dravidian, Mon-Khmer and Tibeto-Burman Dynasties.

In the evening Fida returned with the pictures and I saw the Pakhtordini engraving for the first time. There, sitting in Chitral Fort, the last vestige of the ancient kingdom of Chitral, we observed the works of a great king who ruled over our land over a fifteen centuries ago. The religion has changed but we are the same people and are happily living in our beautiful valley since those ancient times! It is perhaps fitting that I am writing this in May, the month of Buddha Purnima, which marks the birth and enlightenment of the Buddha.

The Buddhist heritage of Chitral is something that must be remembered and future archaeological discoveries may well further illustrate the history of Buddhism in Chitral.–Courtesy: The Friday Times