GILGIT: Thousands of Buddhists from Japan, South Korea and other parts of the world visiting Gilgit city every year crave to see the 7th-century Kargah Buddha figure carved into solid rock at a high altitude, but face difficulties due to the dilapidated condition of the road leading to the site.

Kargah Buddha, Yashani in the local language, is a unique archaeological site located at the junction of Kargah and Shukogah rivulets, some 9km from Gilgit, the capital city of GB. Nearby towns are Barmas, Khur and Napura Baseen.

Gilgit’s rich cultural heritage and spread of Buddhism in surrounding areas is deeply linked to the movement along the silk route. Historical facts reveal that Buddhist caravans used to stay in a monastery here while passing through Gilgit.

Archaeological evidence shows that Gilgit was a Buddhist centre from the 3rd century to the 11th century. A Buddhist monastery and three stupas containing Sanskrit manuscripts were excavated in the 1930s.

It is believed that the carving of Kargah Buddha was completed in the 7th century. The Buddha was discovered along with ruins of a Buddhist monastery and three stupas about 400 metres upriver from the Buddha itself in 1938-39 following the discovery of the manuscripts in 1931. 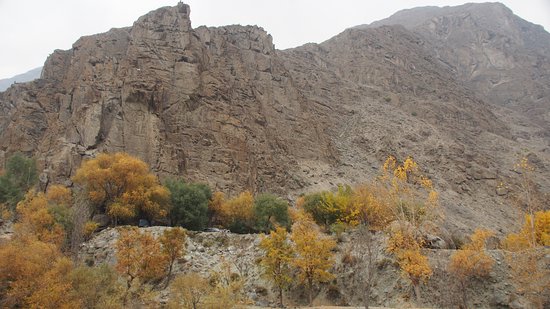 According to Gilgit-Baltistan’s tourism department, around half a million tourists visited Gilgit in the year of 2018-19 to see the Buddha. However, senior journalist Abdul Rehman Bukhari said the road to the Buddha site from Gilgit city was in a very poor condition and needed repair so that it could be accessible for tourist easily. He said the historical site, too, needed the attention of the archaeological department of Gilgit-Baltistan for preservation and safeguarding. The figure had remained intact so far, and should continue to remain for future generations, he added.

Local residents have an interesting myth to tell about Kargah Buddha and the holes around the figure. According to Arshad Wali, who lives in the neighbouring Baseen area, residents believed that there lived an ogress, Yakhshini, in the area. She used to feast on human flesh. To get rid of the ogress, the villages approached a saint who was passing through the area for help. “The saint was said to have succeeded in pinning her to the rock,” he explained. Raqeeb, another resident of Baseen, said the series of holes making the boundary around the Buddha was actually believed to be the pinholes confining the ogress there. “The saint declared that she would not bother them as long as he was alive. And if they buried him at the foothills of the rock, she would never be freed,” he said, adding that the saint was said to have been buried below the Buddha carving.

Gilgit Development Authority (GDA) Director Arif Hussain said for the preservation and protection of Kargah Buddha the GDA was constructing huts, a boundary wall, structure for the stream, a grinder machine, a viewpoint facilitating the tourists to see the Buddha figure easily. More than Rs10 million was being spent on the construction work, he added.

Gilgit-Baltistan has been at the crossroads of cultures, religions and civilisations for centuries, as people used to practise Buddhism or multiple forms of local pagan religions before the advent of Islam in the region.–APP