A petition signed by over 10,000 students & academics from renowned universities across the world also speaks up against ‘illegal siege and curfew’ in AMU over CAA protests, reports Simrin Sirur in ThePrint, an Indian online magazine

Nearly 10,000 students and academics from 1,100 universities around the world have filed a petition condemning the “police brutality” on Jamia Millia Islamia University students who were protesting against the Citizenship (Amendment) Act in Delhi Sunday.

In a joint statement, they also condemned “in the strongest possible terms” the “illegal” siege and curfew imposed on Aligarh Muslim University campus in Aligarh.

The petition has been signed by academics from renowned universities such as The London School of Economics, UC Berkeley, Heidelberg University, the Australian National University, the Max Planck Institute, Science Po, and the University of Tokyo, to name a few. Among the Indian institutions represented in the petition are Jawaharlal Nehru University, Delhi University, IIT-Delhi, Ashoka University, Jadavpur University, and TISS.

“We affirm the right of citizens to peaceful protest and the autonomy of the university as a non-militarized space for freedom of thought and expression. The brutalization of students and the attack on universities is against the fundamental norms of a democratic society,” said the statement.

It expressed “fear” that a situation of violence is unfolding in AMU because of curfews and internet blockages.

“We stand in unconditional solidarity with the students, faculty, and staff of Jamia Millia Islamia and Aligarh Muslim University, and express our horror at this violent police and state action,” reads the statement.

It added, “We are watching with extreme concern the situation unfolding at Jamia Millia Islamia and Aligarh Muslim University. We refuse to remain silent at the violence unleashed on our colleagues (students, staff, and faculty) peacefully protesting the imposition of a discriminatory and unjust law.” 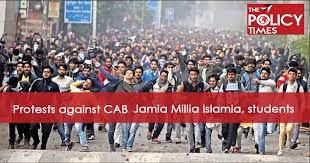 On 15 December, police were seen firing tear gas shells in the Jamia campus and breaking into the library to quell the protest against the new law that seeks to grant citizenship to six persecuted minority communities, barring Muslims, from Pakistan, Bangladesh and Afghanistan.

While the students said they were peacefully protesting, the police claimed they entered the campus while chasing some miscreants from outside.

A similar crackdown was reported in Aligarh Muslim University the same night, where students’ protest against the CAA and in solidarity with Jamia were met with severe action from the police.–Courtesy: ThePrint