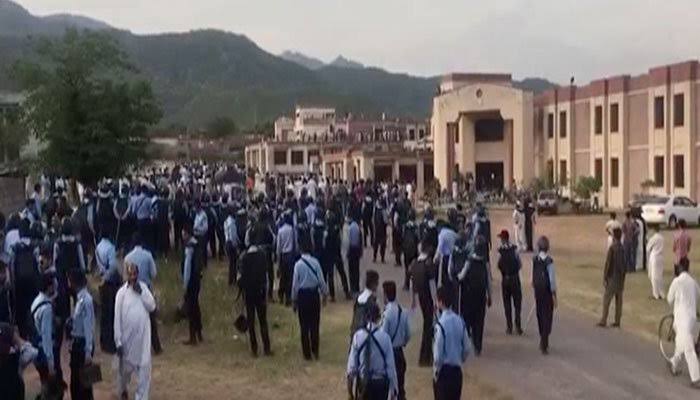 Politicians, rights and student activists caution against the use of IIUI incident as a ploy for continued student union ban

ISLAMABAD: As the police continued hunting down of suspects involved in the International Islamic University Islamabad (IIUI) incident on December 12, political, social and student activists have questioned the state narrative to use the incident as a pretext to continue the ban on the student union.

The clash between the two groups had claimed a student’s life and left 30 others injured.

According to earlier reports, 20 students were nominated in the FIR by the complainant along with unidentified persons. The police lately arrested five of the nominated students and also took 11 other suspects into custody. The arrested students affiliated with different student councils were produced before a civil judge who remanded them in police custody for four days.

The IIUI was closed shortly after the incident and its hostels were also got vacated.

Closure of the university led to a delay in the arrest of students and teams were being sent to native towns of the students to arrest them.

The investigators interrogated 16 students who denied that they were involved in the clash. Some of the students, nominated in the FIR, were at their native towns away from the university.

“We were not even present in the university at the time of the incident,” one of the students was quoted by the police as saying.

The investigators obtained CCTV footage of the crime scene and its adjacent areas which were being examined, the police said. However, the police were yet to recover weapons, batons and iron rods used in the clash by the students though they searched hostels in this regard.

The clash was erupted over holding a book fair in the university. Islami Jamiat Tulaba (IJT) one of the groups who had organised the three-day ‘Mega Educational Expo’ attacked and injured the president and members of the Seraiki Students Council, and other nationalist groups. Later, the aggrieved group attacked the concluding ceremony of the event during which a student, Syed Tufail Hashmi, hailing from Ghizer District of Gilgit-Baltistan was killed and several others were injured. Both the groups used weapons against each other, police sources said.

The death of Hashmi sparked a protest by students in Gilgit. Protesters held placards and demanded action against those responsible for the victim’s death.

According to the findings of the preliminary inquiry shared with Dawn by sources in the district administration, the group that organised the event was affiliated with a politico-religious party.

The university administration had issued a no-objection certificate (NOC) to the group to organise the three-day expo.

On Thursday evening, students’ councils staged a protest against the university administration and their rival group.

The protesters claimed that issuing NOC to the politico-religious group was unjust as the same was denied to them. Besides, outsiders also came to the university to attend the event. 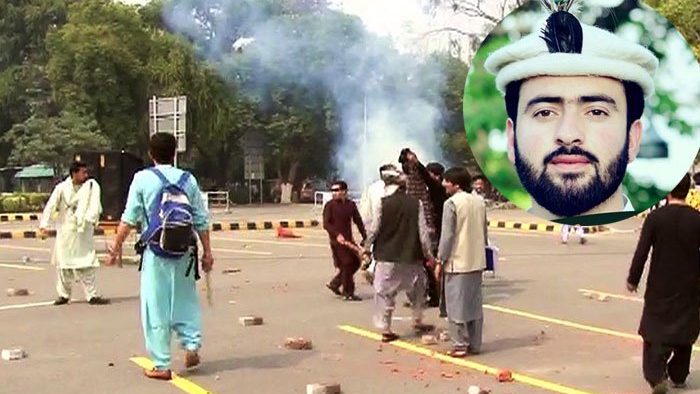 Many political, social and student activists and parliamentarians took to social media and condemned the incident. However, they questioned the failure of the university and the Islamabad administration in controlling the violence by allowing a religiopolitical organisation to operate on campuses and barring others.

They termed it a conspiracy to thwart the struggle for the restoration of the student union on campuses.

Former Senate chairman Raza Rabbani, during the launch of his book, said in the absence of student unions, incidents like the one that took place in the IIUI were taking place on campuses.

He said the Senate had taken up the matter in 2017 and its Committee of the Whole had passed a resolution calling for the restoration of student unions, terming it a constitutional right.

“One incident should not be used as a pretext for continuing the ban on the student union,” Liaqat Baloch

Jamaat-i-Islami deputy chief Liaqat Baloch also echoed Senator Rabbani and others’ views saying one incident should not be used as a pretext for continuing the ban on the student union.

Had the student unions been existed in the university, this incident would not have happened, Mr Baloch said.

Noted rights defender and social media activist Jibran Nasir said those who stand against violence on campus, those who believe that as students and academics peaceful measures of settling all disputes on campuses should be adopted, must demand Justice for Syed Tufail.

“Violence can’t be justified, calls for justice can’t be selective,” he added.

The Awami Workers Party (AWP) has also expressed dismay at the incident of violence.

“The party is of the view that these and other incidents of gender-based and faith-based violence against minor children, women, and marginalized segments of society, indicate the rising extremist tendencies and social, economic and institutional breakdown, due to the apathy of the ruling clique, the establishment, and the disastrous economic policies of the current rulers,” said AWP general secretary Akhtar Hussain.

He cautioned that Pakistani society is sliding towards anarchy.

Ismat Shahjehan, head of Women Democratic Front and deputy secretary of AWP the idea of deploying rangers to restore civil order in the cities as well as at the academic institutions is totally uncalled for.

“The rising extremism, intolerance, frustration, and anger among doctors, lawyers and students are linked to social injustices, unemployment and shrinking space for freedom of expression,”  Ismat Shahjehan

She linked the rising extremism, intolerance, frustration, anxiety, and anger among various sections of society including doctors, lawyers, students to social injustices, unemployment and shrinking space for freedom of expression and overarching security policy.

“Violence that occurred at IIUI also reflect the same sorry state of affairs of the diminishing level of tolerance in society”, Ammar Rashid

The act of violence that occurred at IIUI also reflect the same sorry state of affairs of the diminishing level of tolerance in society, which was related to the absence of democratic freedoms and institutions like student unions for decades, said AWP leader Ammar Rashid and one of the organisers of the student march.

He was of the opinion that the tragic incident is in part a consequence of the student union ban, depoliticization of campuses and the complete absence of a healthy student electoral competition.

“Student politics has degenerated into identity-based turf wars; this has allowed armed thugs and militant wings to dominate the underground student politics resulting in pitting students against each other on religious, ethnic and sectarian lines, preventing them from engaging in healthy debate and understand each other’s differences,” he said.

They expressed grief over the death of Syed Tufail Hashmi and injuries to over two dozen other students affiliated with Pakhtun, Seraiki and Sindhi councils.

Sanagar, a leader of PrSF, said his organisation “believes that violence has no place in student politics, and cannot be tolerated in any form; the sanctity of human life is at the core of our worldview and cannot be compromised at any cost.”

We believe the absence of democratic debate, lack of freedom of association and limitation of student politics into ethnic and religious groupings has fostered intolerance and ethnic and religious hatred on campus and prevented students from being able to engage with and understand each other’s differences, said Muneeba, an activist of PrSF.

The only solution to this culture of violence lies in the restoration of campus democracy in which healthy ideological debate and competition can take place, said Danish, another activist.