PAKATAN, PUNJAB: Muhimman proudly writes his name slowly, carefully, one letter at a time, grinning broadly as he finishes. He’s just 11 years old and was a good student who had dreams of being a doctor.

School frightens him now. Earlier this year, a cleric at the religious school he faithfully attended in the southern Punjab town of Pakpattan took him into a washroom and tried to rape him. Muhimman’s aunt, Shazia, who wanted only her first name used, said she believes the abuse of young children is endemic in Pakistan’s religious schools. She said she has known the cleric, Moeed Shah since she was a little girl and describes him as a habitual abuser who used to ask little girls to pull up their shirts.

“He has done wrong with boys and also with two or three girls,” Shazia said, recalling one girl the cleric brutalized so badly he broke her back.

An investigation by The Associated Press found dozens of police reports, alleging sexual harassment, rape and physical abuse by religious clerics teaching in madrassas or religious schools throughout Pakistan, where many of the country’s poorest study. The AP also documented cases of abuse through interviews with law enforcement officials, abuse victims and their parents. The alleged victims who spoke for this story did so with the understanding only their first names would be used.

Child Sexual abuse in Pakistan Madrassahs.
Police officials say they have no idea how many children are abused by religious clerics in Pakistan. The officials said clerics often target young boys. pic.twitter.com/Jil8zu4jk9

There are more than 22,000 registered madrassas in Pakistan, teaching more than two million children. But there are many more religious schools that are unregistered. They are typically started by a local cleric in a poor neighbourhood, attracting students with a promise of a meal and free lodging. There is no central body of clerics that governs madrassas. Nor is there a central authority that can investigate or respond to allegations of abuse by clerics, unlike the Catholic Church, which has a clear hierarchy topped by the Vatican.

The government of Prime Minister Imran Khan has promised to modernize the curriculum and make the madrassas more accountable, but there is little oversight.

Police say the problem of sexual abuse of children by clerics is pervasive and the scores of police reports they have received are just the tip of the iceberg. Yet despite the dozens of reports, none have resulted in the conviction of a cleric. Religious clerics are a powerful group in Pakistan and they close ranks when allegations of abuse are brought against one of them. They have been able to hide the widespread abuse by accusing victims of blasphemy or defamation of Islam.

Families in Pakistan are often coerced into “forgiving” clerics, said Deputy Police Superintendent Sadiq Baloch, speaking in his office in the country’s northwest, toward the border with Afghanistan.

Overcome by shame and fear that the stigma of being sexually abused will follow a child into adulthood, families choose instead to drop the charges, he said. Most often, when a family forgives the cleric the investigation ends because the charges are dropped.

“It is the hypocrisy of some of these mullahs, who wear the long beard and take on the cloak of piety only to do these horrible acts behind closed doors, while openly they criticize those who are clean-shaven, who are liberal and open-minded,” Baloch said. “In our society, so many of these men, who say they are religious, are involved in these immoral activities.” 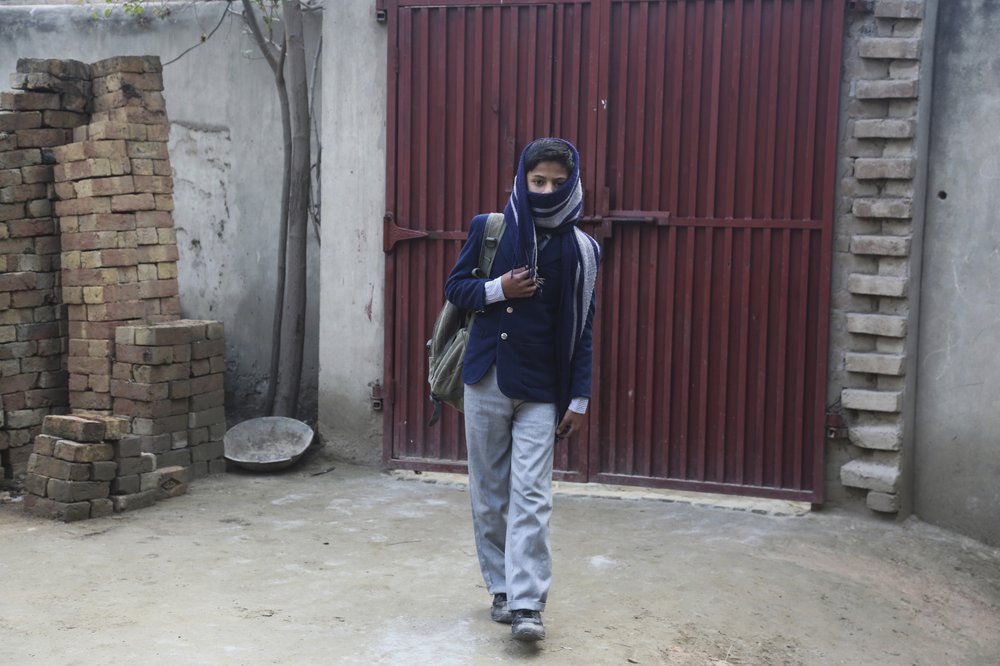 In this Feb. 4, 2020 photo, student Muhimman, 11, who was allegedly abused by a cleric, in the south Punjab town of Pakpattan.–AP

‘I WANT THIS MULLAH HANGED’

Police officials say they have no idea how many children are abused by religious clerics in Pakistan. The officials said clerics often target young boys who have not yet reached puberty in part because of the restrictive nature of Pakistan’s still mostly conservative society, where male interaction with girls and women is unacceptable. The clerics, for the most part, had access to and trust with boys, who are less likely to report a sexual assault.

Eight-year-old Yaous from Pakistan’s remote northern Kohistan region is one of those boys.

Yaous’ father was a poor labourer who had no education and spoke only the local language of his area, yet he wanted to educate his son. He had heard of a religious school in Mansehra, several hundred kilometres (miles) south of his village, where other boys from the area had gone. Too poor to even own a phone, his father went for months without speaking to his son.

Yaous is small for his eight years. His features are slight. In an interview with the AP, with his uncle interpreting, Yaous’ tiny body shivered as he told of his ordeal.

It was near the end of December last year — a holiday at the madrassa. Most of the students had left. Only Yaous and a handful of students had stayed behind. His village was hours away, and the cost of transportation home was too much for his parents.

The other students had gone to wash their clothes and Yaous said he was alone inside the mosque with Qari Shamsuddin, the cleric. The sexual assault was unexpected and brutal. The boy said Shamsuddin grabbed his hand, dragged him into a room and locked the door.

“It was so cold. I didn’t understand why he was taking my warm clothes off,” Yaous said, his voice was barely a whisper.

As Yaous remembered what happened, he buried his head deeper into his jacket. The cleric grabbed a stick, he said. It was small, maybe about 12 inches. The first few sharp slaps stung.

“The pain made me scream and cry, but he wouldn’t stop,” Yaous said. The boy was held prisoner for two days, raped repeatedly until he was so sick the cleric feared he would die and took him to the hospital.

At the hospital, Dr Faisal Manan Salarzai said Yaous screamed each time he tried to approach him. Yaous was so small and frail-looking, Salarzai called him the “baby.”

“The baby was having a lot of bruises on his body — on his head, on his chest, on his legs, so many bruises on other parts of his body,” Salarzai said.

Suspicious, Salarzai ordered Yaous moved to the isolation ward where he examined him, suspecting he had been sexually assaulted. The examination revealed brutal and repetitive assaults.

“He was not willing to talk about it or even think that he was sexually assaulted,” said Salarzai. But the evidence was overwhelming and the doctor contacted the police.

The cleric was arrested and is now in jail. Police have matched his DNA samples to those found on Yaous. But despite the arrest, fellow clerics and worshippers at the Madrassah-e-Taleem-ul-Quran mosque located in a remote region of northwest Pakistan dispute the charges. They say Shamsuddin is innocent, the victim of anti-Islamic elements in the country. The clerics and worshippers also say the accusation is part of a conspiracy to discredit Pakistan’s religious leaders and challenge the supremacy of Islam, a rallying cry often used by right-wing religious clerics seeking to enrage mobs to assert their power.

Yaous’ father, Abdul Qayyum, said he was ashamed he had not spoken to his son in more than three months before the attack happened.

“I want this mullah hanged. Nothing else will do,” Qayyum said. 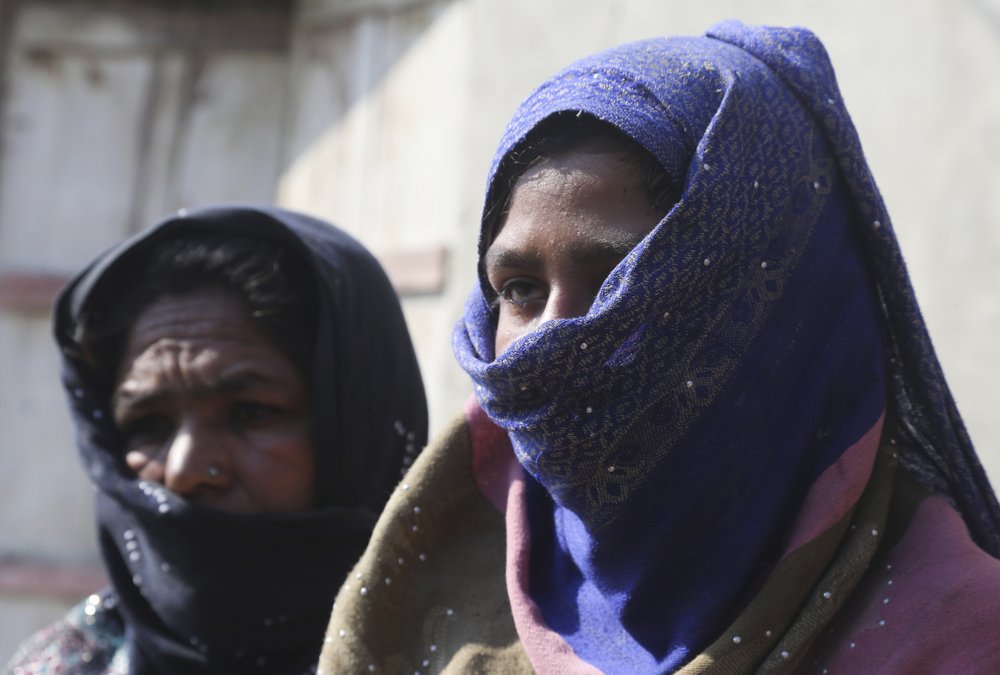 In this Feb. 5, 2020 photo, Misbah, right, who was allegedly abused by her religious teacher sits with her mother Sughran in Layyah.–AP

Young boys are not the only victims of sexual abuse by religious clerics. Many young girls like Misbah, who is from a deeply conservative south Punjab village of Basti Qazi, have also been targeted by religious leaders.

Her father, Mohammad Iqbal, isn’t exactly sure how old Misbah is. He thinks she is 11 because in rural Pakistan many births are not registered or are registered much later, and it is just a guess when children are born. They share their small cinderblock structures with several goats and an extended family made up it seems of mostly children who play tag and run around the dirt compound. Misbah, who struggled for words, said she was raped in the mosque next door, where she had been studying the Quran for three years.

The assault happened one morning after she stayed behind to sweep the mosque. The other children had been sent home and the cleric, someone she trusted, asked Misbah to help.
“I had just begun to clean when he slammed shut the mosque door,” she said in her native Saraiki language. “I didn’t know why and then he suddenly grabbed me and pulled me into a nearby room. I was screaming and shouting and crying. She couldn’t say how long the assault went on. All she could remember was screaming for her father to help her but he wouldn’t stop, he wouldn’t stop, she repeated.

It was her uncle, Mohammed Tanvir, who rescued her. He had been on his way to college but stopped at the mosque to use the washroom. He noticed a pair of child’s shoes outside the door.

“Then I heard screaming from inside, she was screaming for her father,” Tanvir said. He smashed the door down saw his niece sprawled and naked on the floor. “It looked as if she had fainted,” he said. Her blood-stained pants were in a corner. The cleric knelt at his feet.

“‘Forgive me’ he kept saying to me,’” Tanvir recalled. The cleric was arrested but freed on bail. 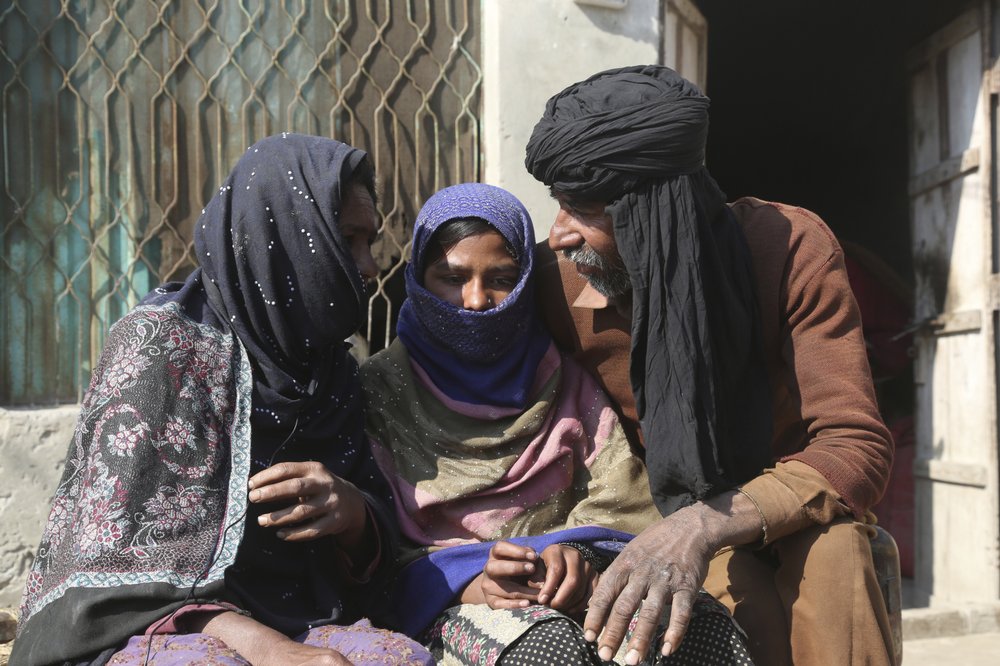 In this Feb. 5, 2020 photo, Mohammad Iqbal talks to her daughter Misbah, centre, who was allegedly abused by her religious teacher in Layyah.-AP ‘SUCH A BEAST SHOULD NOT BE SPARED’

In the wake of the attempted rape of Muhimman, the young boy who had proudly shown his writing skills, his aunt said there has been a concerted attempt to silence the family.

“The village people say these are our spiritual leaders and the imams of our religious places and refuse to kick him out,” Shazia said.

After the attack on her nephew, she said, the villagers came to their home and pleaded with them to forgive the cleric, Moeed Shah, who had fled the area.

“They all came to our home and they know we are poor and he is an imam and they said we should forgive him but we won’t,” Shazia said. She said her father, Muhimman’s grandfather, refused.

Shah has yet to be arrested, even though the assault was filmed by several village boys who broke down the door to the washroom and frightened Shah away as he tried to rape Muhimman.

Police say they are investigating and a charge has been filed, but Shah is a fugitive. Some of the neighbours near the mosque said police are not searching vigorously for him. They seemed angry but also resigned to the fact that he would not be jailed.

“Such a beast should not be spared at all,” Shazia said.-AP