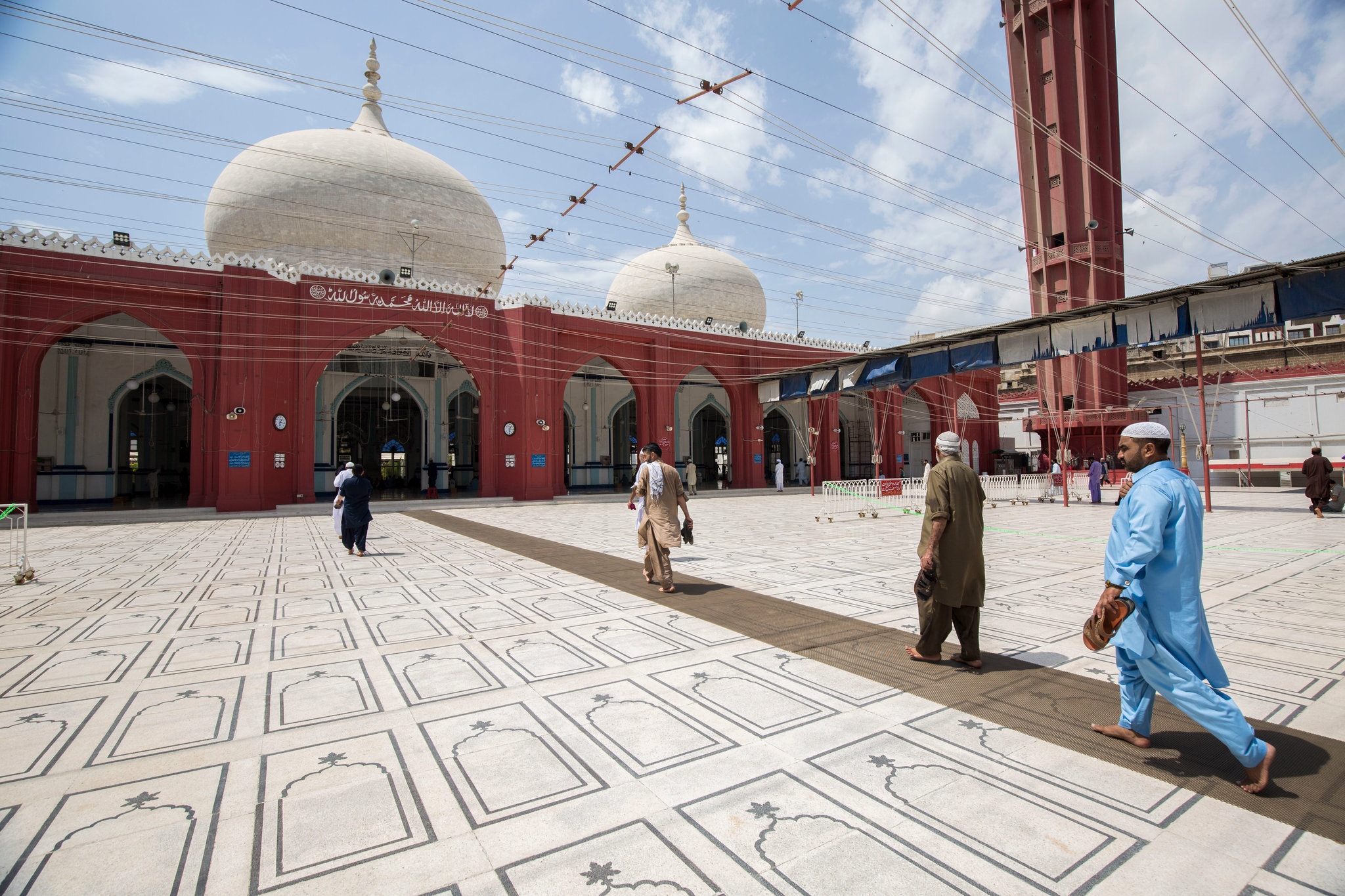 Worshipers entering the Memon Mosque in Karachi, Pakistan, on Sunday. The mosque remained open during a three-day lockdown of the city. Photo:Saiyna Bashir

While Pakistan’s government and military are at odds over how to respond, doctors are protesting to get equipment and more testing, and clerics are refusing to limit mosque gatherings, says a report published in The New York Times.

KARACHI: Doctors are refusing to show up for work. Clerics are refusing to close their mosques. And despite orders to stay at home, children continue to pack streets across Pakistan to play cricket, their parents unwilling to quarantine them in crowded homes.

Pakistan is facing its biggest challenge ever: how to mobilize its broken state as the number of coronavirus cases rapidly spreads in the world’s fifth-most populous country.

More than ever, the epidemic is showcasing weaknesses in the government, and the tensions between it and the country’s powerful military. Many within the country’s clerical establishment have refused to help, rejecting calls to limit mosque gatherings and bringing together at least 150,000 clerics from around the world this month in a religious gathering that helped spread the virus.

By Thursday afternoon, Pakistan’s cases had risen to 1,098, up from some 250 a week ago. Eight deaths have been reported. But many fear that the real numbers are much higher because of a lack of testing and, in some cases, suppressed information.

Already, Pakistan was struggling to provide electricity, water, and adequate health care to its 220 million people. Diseases that have been controlled elsewhere, like rabies and polio, still persist here.

In recent weeks, as the coronavirus’s march across the globe was intensifying, Prime Minister Imran Khan played down its dangers. Pakistani officials bragged that the country was virus-free, but little was being done to set up testing anywhere. 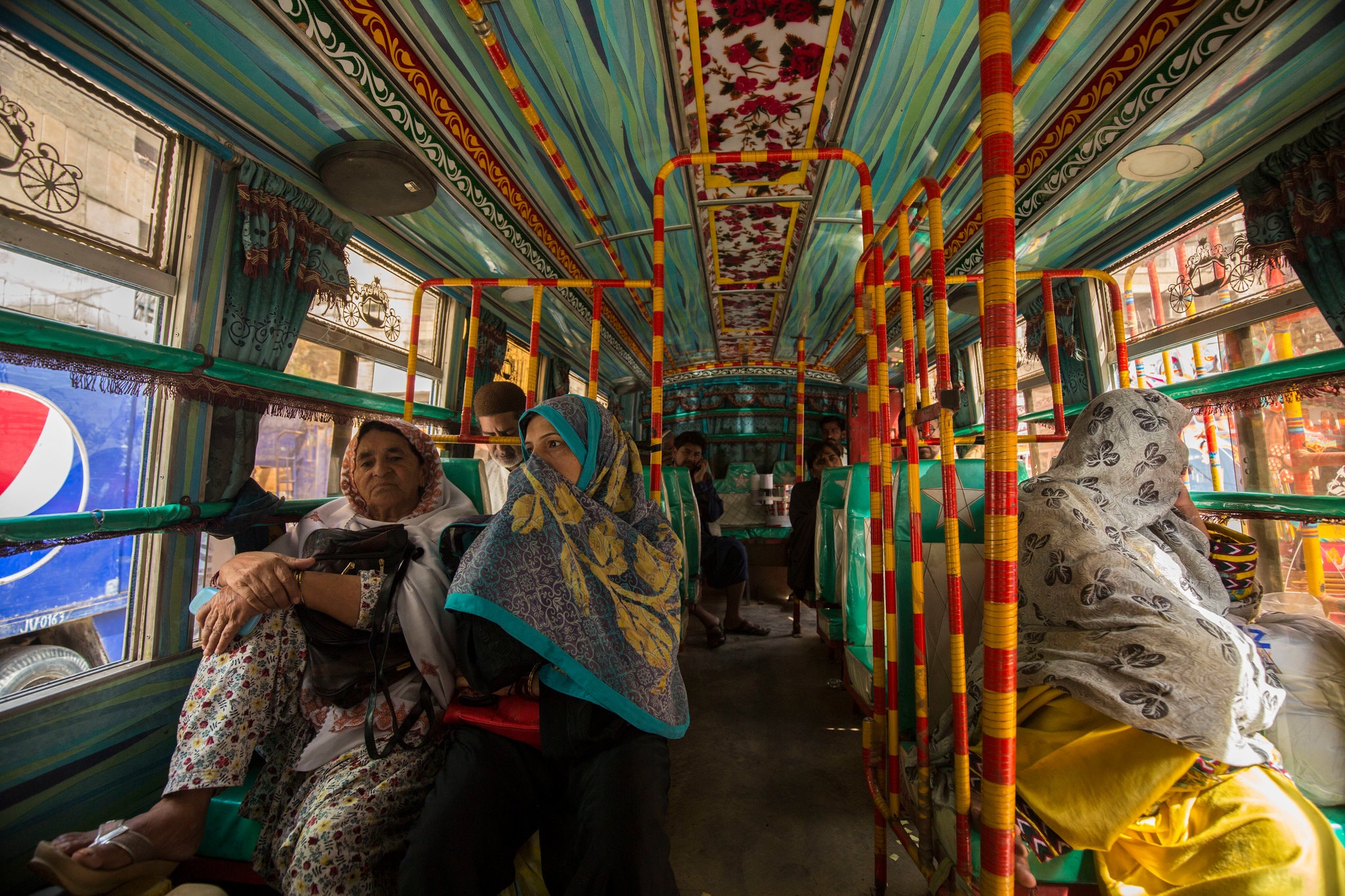 Mr. Khan rejected calls from health care workers and provincial officials to enforce a lockdown, saying it would ruin the economy. Instead he urged citizens to practice social distancing and ordered everyone back to work, many returning to the sweltering, cramped factories that are the backbone of the economy.

Finally, the military stepped in on Sunday and sidelined Mr. Khan, working with provincial governments to deploy across the country and enforce a lockdown. They erected a maze of military checkpoints in cities like Karachi and sent baton-wielding police officers to violently disperse crowds.

But the action may be too late. Doctors and nurses are refusing to come to work, fed up with the weak initial response to contain the virus’s spread.

And the extremist clerics who often heckle or march against the civilian government, with the tacit approval of the military, are refusing to help. They largely ignored Mr. Khan’s call to limit Friday prayer gatherings. And even after the military deployed to try to enforce a lockdown, several clerics made videos that went viral in recent days, urging Pakistanis to come back to the mosques to worship.

To avoid mosques on Fridays would only invite God’s wrath at a time when people need his mercy, the clerics warned.

“We cannot skip Friday prayers because of fears of coronavirus,” said Shabbir Chand, a trader who attended a packed service in Karachi, the country’s biggest city. “Instead, we should gather in even larger numbers in mosques to pray to God to protect us from this fatal disease.” 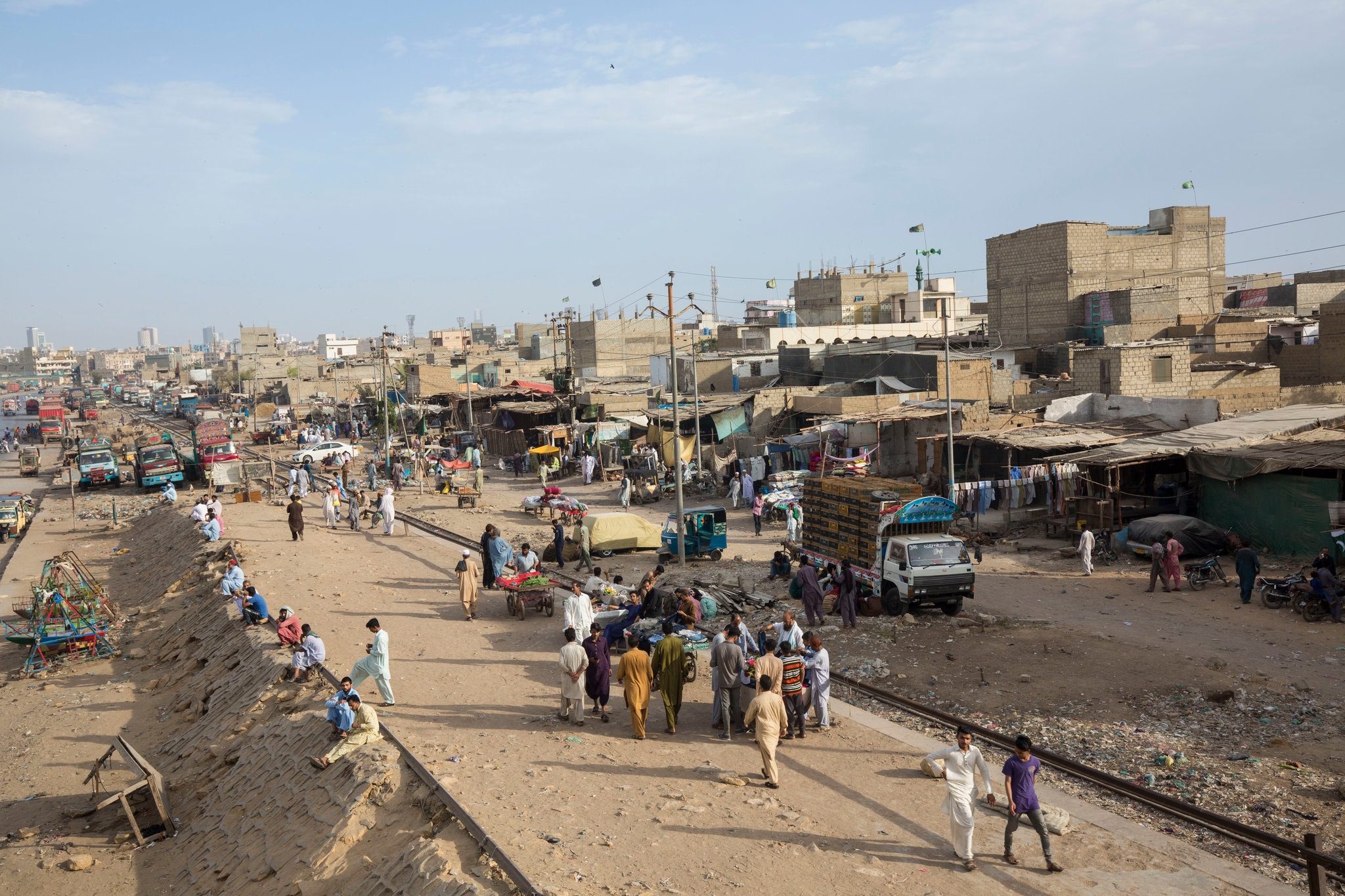 People gathered for entertainment early Sunday evening outside an abandoned railway station in a Karachi slum.

The gathering proved a perfect transmission point, infecting indeterminate numbers of Pakistanis, at least two Kyrgyz citizens and two Palestinians who flew home and introduced the virus to the Gaza Strip. A similar gathering of Tablighi Jamaat in Malaysia infected more than 620 participants who then returned to half a dozen countries across Southeast Asia.

In Pakistan’s capital, Islamabad, doctors, and nurses at the Pakistan Institute of Medical Sciences, known as PIMS, who was tasked with screening coronavirus patients threatened to walk off the job this week if the government didn’t provide them with basic equipment like masks and gloves, which they received only on Saturday.

In one case at the hospital, government officials who had tested a woman who died there after showing symptoms of the coronavirus disease, Covid-19, refused to share her test results with doctors and nurses there and told them not to talk to journalists about it, they said.

The state has always been too impoverished to provide masks to the doctors and nurses at the emergency rooms of public hospitals, and they have always bought their own. But prices are surging as civilians hoard whatever they can, forcing emergency room doctors at PIMS to spend $70 of their $460 monthly salary on masks, some said.

While many of his colleagues called in sick this week, refusing to work as the virus surges, one doctor said he would continue to scrub in every day.

“We have no other way. We just can’t think about it. If we don’t fight it, who will?” the doctor said, adding that morale was low among his colleagues. “So we tell each other, ‘Our profession is sanctified from God. God will protect us.’ But those are just words.” 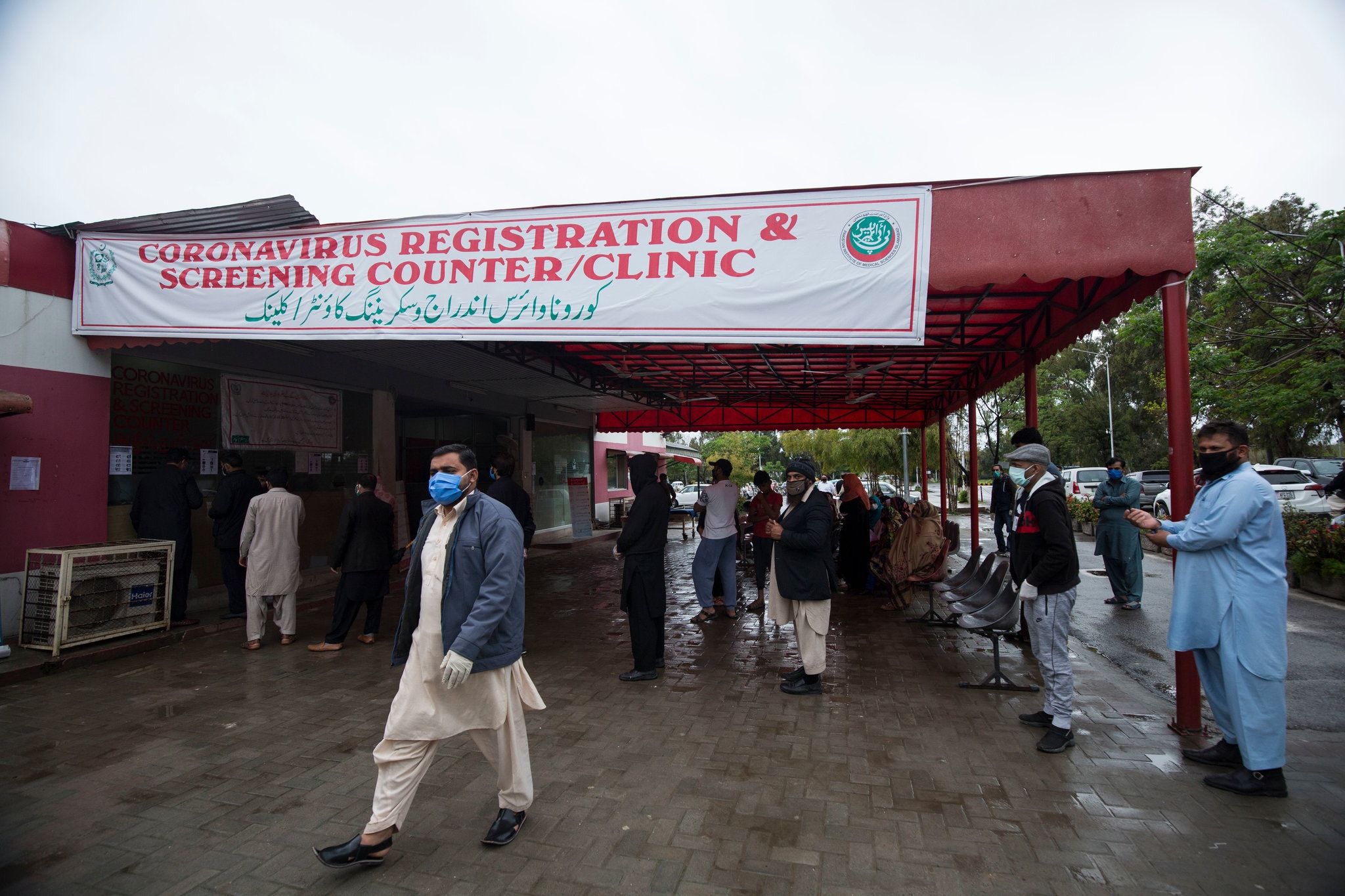 The line for coronavirus testing on Tuesday at the Pakistan Institute of Medical Sciences, the only screening center in Islamabad, the capital. Photo by Saiyna Bashir

If the virus spreads much further, Pakistan’s entire health care system may meltdown. In Karachi, a port city of some 20 million, there are only 600 beds in intensive care wards. There are 1,700 ventilators across the country, and last week, there were only 15,000 N95 masks for doctors and nurses, officials said.

“We don’t even have anti-rabies vaccines. How can we deal with thousands of people who will come here for coronavirus treatment?” said one doctor at a state-run hospital, who also complained that they had not been issued protective gear. As a government employee, the doctor had been barred from talking to the media and requested anonymity to express concerns.

In February, it became clear Pakistan was facing a major outbreak of coronavirus, as the disease surged in Iran, which quickly became an epicenter. Thousands of Pakistanis visit Iran every month for work or religious pilgrimage, and the countries share a long border.

Officials closed the border, but hundreds of Pakistanis managed to get back in any way, either rerouting through Afghanistan to cross the border there or bribing guards to get back in, witnesses and officials said.

In order to prevent thousands more from illegally crossing, officials decided to quarantine them in Taftan, a border town. But conditions were so bad — cramped and filthy, with the virus spreading quickly — that people being held there rioted, burning part of the camp down.

“We had no proper food, no screening of anyone for coronavirus,” said Syed Haider Ali, a student who had been quarantined at Taftan.

“It was not an attack on the camp, but an attempt to rescue ourselves from the animallike treatment we were receiving,” he said. “We appealed to the government to treat us like humans, but it fell on deaf ears.” 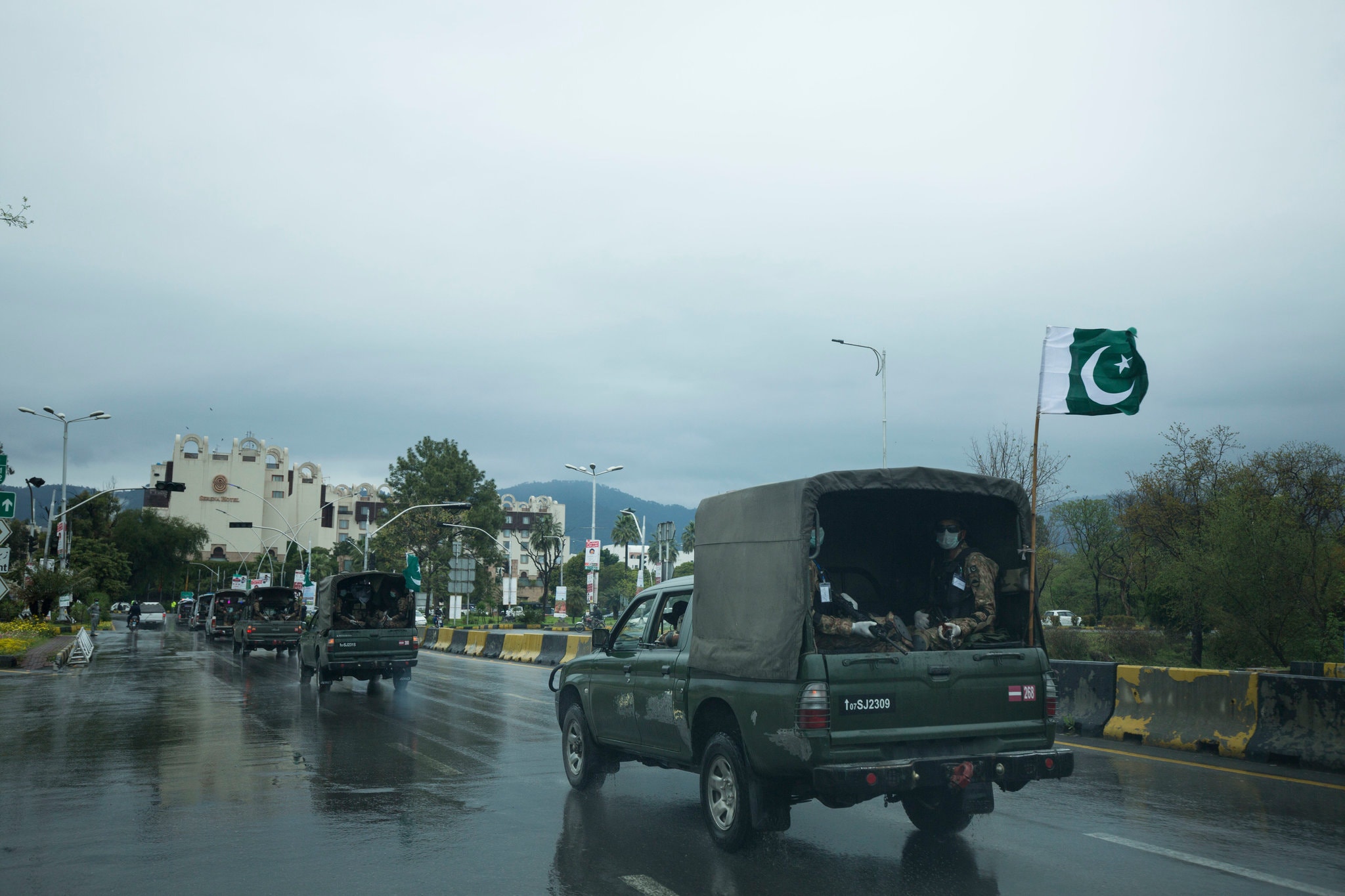 A military convoy patrolling the streets of Islamabad on Tuesday as a loudspeaker encourages citizens to practice social distancing. Photo by Saiyna Bashir

The government kept some 4,600 people under a 14-day quarantine in Taftan and let most go after they developed no symptoms. They returned to their villages and cities across Pakistan, where dozens turned out to have been infected when they tested by local health care workers.

Now the government is trying to build more quarantine centers, but they keep coming under attack by residents who live nearby and do not want the risk of another botched government operation.

In Karachi, military checkpoints have been erected every few hundred yards throughout the city and the police make rounds to enforce a lockdown, wielding batons to beat people back into their homes.

But in the slums, a carnival-like atmosphere has burst out onto the streets, with schools shut down and children playing in the narrow alleyways that are lined with open sewers. During a recent visit by journalists, the police swept through the neighborhood, yelling at people to get back indoors. But residents ignored them, and, outnumbered, the officers soon gave up.

Jahangir Baloch, who lives with dozens of family members in a cramped three-story building, pointed at the children playing in the street as he explained why keeping them home was a lost cause.

“Tell me how I can observe social distancing when I live with 40 other people,” Mr. Baloch said. “It won’t work.”

This article was first published in The New York Times.