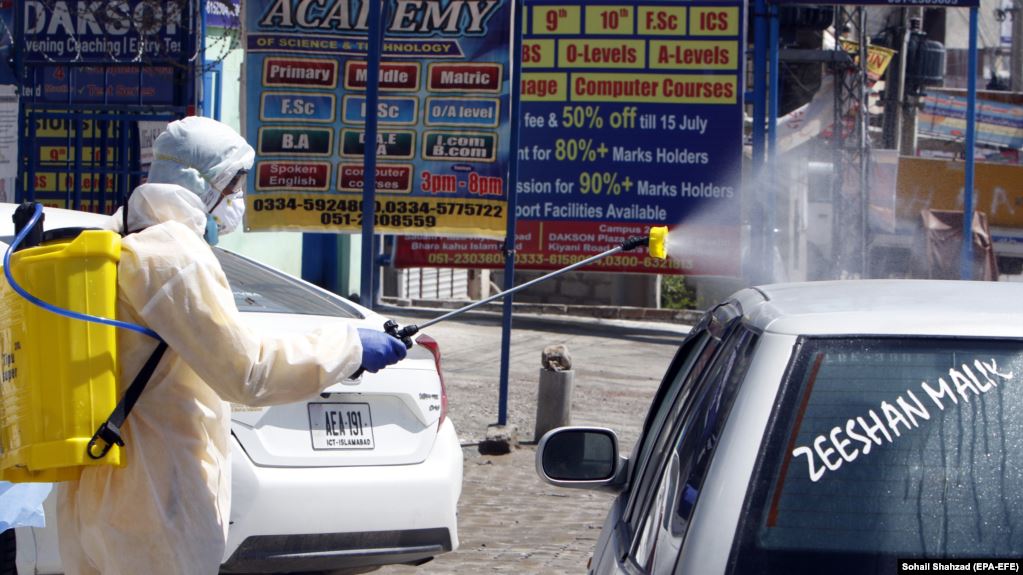 Pakistani workers spray disinfectant during a lockdown in the capital, Islamabad.

As coronavirus struck Pakistan, a desperate young professional goes off healthcare grid for the ‘experimental’ care, writes Andy Heil in his special report on COVID-19 in Radio Free Europe and Radio Liberty pages.

A bookish 34-year-old on the autism spectrum, Abbas spent weeks gobbling up information about the coronavirus pandemic.

He knew that early studies from the source of the COVID-19 outbreak, central China, and elsewhere suggested his youthfulness may reduce his vulnerability to the illness.

But Abbas, a systems administrator from Faisalabad, in Pakistan’s Punjab region, didn’t like what he was seeing, including on the MedCram YouTube channel, a personal favourite.

“I’m not a very healthy person per se, but I do take precautions,” Abbas, a self-described “germophobe,” told RFE/RL.

“Because I’m on the [autism] spectrum, I like being lonely and I don’t go to public gatherings — whether it’s a pandemic or not. I like staying alone mostly. And I like reading.”

Abbas is saddled with the kind of potential underlying health issues that can aggravate many illnesses.

He’s a longtime sufferer of pulmonary fibrosis, a scarring of the lungs that causes laboured breathing. He was also born with cardiomegaly, an enlargement of the heart that can make him light-headed or nauseous, and he takes antihistamines for allergies.

Going off the grid

So when Abbas woke up one morning in mid-March feeling unwell, he tried his usual palliative: anti-allergenic and a walk.

But when the sore throat, headache, temperature, and hacking cough intensified, he called a government COVID-19 hotline on March 23.

At that time, the coronavirus pandemic had already infected at least 200,000 worldwide and killed more than 7,000 people, but there were fewer than 800 confirmed cases in Pakistan.

“They told me to go visit the civil hospital if my symptoms don’t improve, but I didn’t want to go there because I know how disorganized and unhygienic that place is,” Abbas said.

Instead, he tried a hack.

“I was quite afraid and worried that this might turn into pneumonia,” Abbas said.

A former colleague put him in touch with a mutual acquaintance, a doctor at a private hospital.

Within hours, the Punjab regional government would announce a lockdown to combat the spread of the coronavirus, effective the next day, prompting Abbas to move to his mother’s home outside Faisalabad to self-isolate.

That was still March 23, but Abbas was now effectively off Pakistan’s official coronavirus grid.

Punjab is responsible for nearly half of Pakistan’s 4,005 confirmed cases of COVID-19 infection, according to Health Ministry figures on April 7. The ministry also reported 55 deaths related to the virus.

Its challenges were highlighted this week by news that regional officials were still scrambling to quarantine tens of thousands of attendees at a gathering by an Islamic missionary group in Lahore in mid-March when Pakistan only had a few dozen confirmed coronavirus cases but social-distancing measures were being encouraged.

Local media have repeatedly warned of an unrealistic and dangerous reliance on untested COVID treatments, including antimalarials and an experimental plasma therapy to boost patients’ systems with antibodies from recovered patients.

But hospitals in Punjab appear to be among Pakistan’s most eager to administer antimalarials on the basis of still fragmentary — and clinically unproven — signs they might help fight COVID-19 and its pneumonia-like symptoms.

“We are using hydroxychloroquine for moderate to mild pneumonia cases,” Punjab’s health minister, Dr Yasmin Rashid, told RFE/RL’s Radio Mashaal on April 6. “Yes, we recommend that if the symptoms are there.”

On March 24 Abbas was tested, by the private doctor, and was self-isolating although the wait for the result of his coronavirus test would take several days.

“But since my test came back positive, he told me the risks and prescribed [antimalarials and] said he isn’t sure if it would work or not and all the disclaimers and such but it is one of the few drugs currently being used in the country to fight the virus.”

Speaking via Whatsapp, Abbas told the doctor he was aware of the risks and, in what he described as his “nerd” way, cited COVID-19’s mortality rate and other statistics.

He was initially given Basoquin and later an antiviral called Arceva.

Basoquin contains amodiaquine, a variety of the 4-aminoquinoline derivatives used for over a decade as an antimalarial, antiviral, antibacterial, and anti-asthmatic.

Those derivatives also include the much-hyped but insufficiently tested hydroxychloroquine antimalarial touted by US President Donald Trump as part of what he suggested might be a “miracle cure.”

Health experts stress that such antimalarials’ effects and risks for COVID-19 patients are still uncertain, though accelerated testing with coronavirus patients is underway in a number of countries, including the United States.

The US Food and Drug Administration (FDA)issued an order in late March approving the physician-supervised use of hydroxychloroquine for COVID-19 patients, and Trump vowed that the government had stockpiled 29 million doses of it.

But the top US expert on infectious-diseases, Dr Anthony Fauci, warned last week, “We still need to do the kinds of studies that definitively prove whether any intervention, not just this one, any intervention is truly safe and effective.”

Abbas said that when the doctor prescribed his medication, “he said that the [encouragement] he has received from the coalition government is that he has to prescribe the antimalarials as a workaround so that most people don’t get any sort of, like, lung infection.”

By March 26, Abbas said he would have told people “I was going to die.”

By April 6, Abbas said he felt well enough that he had stopped taking all medication but was “still self-isolating until next weekend, just in case, so I don’t inadvertently transmit it to others.”