Academics, students, workers, young doctors and progressive activists have rejected the proposed plan of privatisation of key sectors of education, health and cut in education budget.

The recent decisions of privatizing health sectors and cut in budget for Higher Education Commission (HEC) by the ‘Naya Pakistan’ proponents are extremely problematic, they said at a public discussion at a meeting organised by Haqooq-e-Khalq Movement at Lahore on Friday (May 10). 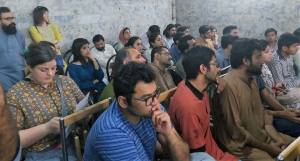 Chaired by Zahid Ali and Awais Qarni, the meeting was organised in the backdrop of recent budget cuts and plans for privatizing key sector of education and health by the government. The meeting was also attended by lawyers, students, journalists, and progressive activists who stressed the need for mobilising people to resist every anti-people, anti-worker action of such nature.

It was decided in the meeting that a protest sit-in will be held on 24th May outside the Punjab Higher Education Department office.

Moreover, it was also decided to observe a ‘national day of action’ on the eve of the presentation of national budget for next year to agitate against the attempt to cut development spendings in the PSDP.

The government is practically handing over the economy to the IMF; its finance adviser and governor of the central bank are people who have lived or are still on IMF’s payroll, they said.

As opposed to building an economy of the people, where the rich are taxed and the poor are given reliefs, the government is cutting spending in all departments of public welfare, including health and education on the directives of, and in its bid to seek rent from its masters at the IMF.

“IMF is forcing the government to slash the Higher Education budget by 50 percent. A number of public hospitals is being privatized, prompting protests from doctors and medical staff,” says Dr Ammar Ali Jan, in his Facebook post.

“On top of these cruel policies, the prices of petrol, gas, electricity and medicine have increased exponentially. This is an unbearable attack on ordinary people,” he added.

All the speakers criticised the government’s decisions, which lie in direct contradiction with its electoral promises, to increase the role of IMF in its financial decision-making.

Pakistan’s economy currently lies in confusion between Washington and Beijing. Even after clear failures in previous attempts of privatisation, such as the PTCL, the government is still seeking to actively privatise all public sectors, and all attempts of criticising such policy-making are met with harsh and extreme mechanisms of repression and censorship.

The participants urged all progressive and secular forces to get united against implementation of the neo-liberal economic agenda imposed by the IMF sleuths.