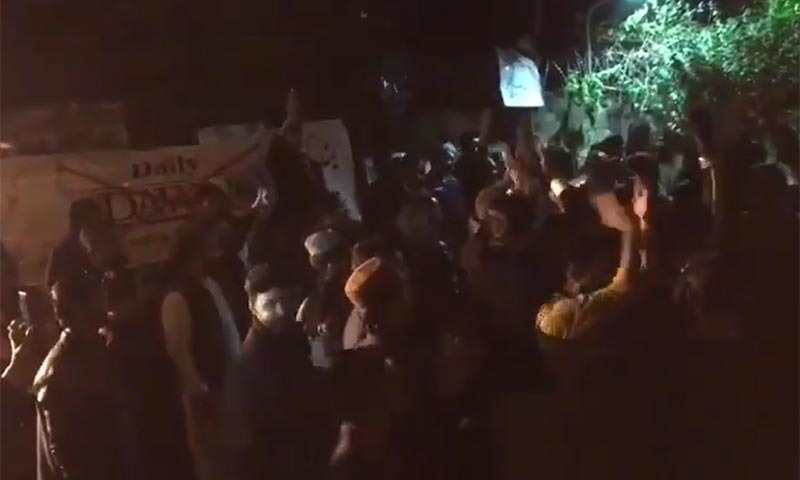 One may disagree with another’s point of view, but threatening violence or restricting the movement of anyone is criminal act unacceptable in a civilised society, says Umer Farooq while commenting on the attack and besieging of Dawn’s offices in Islamabad and Karachi.

Protest against a news outlet or a journalist is absolutely within the acceptable norms of a civilized society but besieging a newspaper’s office and threatening violence against unarmed journalists is an alarming indicator of uncontrolled violence as a rising social trend in the society.

What happened in front of Dawn Islamabad’s office cannot be described as a civilized behavior—a mob put the building of Dawn Islamabad under siege and restricted the movement of its staff for three hours. They were using abusive language and were threatening violence.

The most alarming part of the episode was that the protesters remained unidentified. Reportedly they were protesting against a report in Dawn, which identified the recent perpetrator of the London bridge knife attack as of Pakistani origin.

Civilized behaviour demands that you protest against those who are using arguments and words to put forward their point of view, with words and arguments only. Threatening violence or restricting the movement of anyone is criminal behaviour, which is absolutely unacceptable in a civilised society.

More dangerous is the attitude city administration towards these protesters, who, in front of administration officials used threatening language against the journalists and restricted their movements.

Ironically the administration didn’t ask the protesters, which organisation had organised the protest. Have they taken permission from the city administration to stage a protest? If there was no organization which was organizing the protest, how a mob of more than 100 people assembled in front of Dawn building? Lastly and most importantly, if these protestors were not the aggrieved party, then how could they demand the newspaper administration to issue an apology?

One of the staffers of Dawn newspaper tweeted that most of the protesters hadn’t read the news item against which they were protesting.

In a city like Islamabad, it is not very difficult to conclude as to how this mob got assembled. But what is alarming is that the people who were instrumental in getting this mob assembled had not learned anything from the history of Karachi city, where they started to play these kinds of games in 1980s. And history is a witness of how the games and tussles, which officials of the state machinery played in Karachi city destroyed the civic life in that city. Let’s hope the country’s state machinery realises that mobs and attacks are not the answer to their problems.

Secondly, the state machinery will have to realise that stifling an independent voice will do more harm to their cause—of a strong Pakistan—than any of the harmless words that get printed in the newspapers. Defending Pakistan against all threats might be a superior cause or a supreme value. But what exactly are you defending? Pieces of barren lands or concrete buildings.

The best thing a country or a nation could defend are its social, political and cultural values, which provide the foundation for its way of life—democracy, freedom of expression and its concrete manifestations are something to be defended with the combined efforts of the nation. Mobs and attacks are a sure recipe for chaos and anarchy.