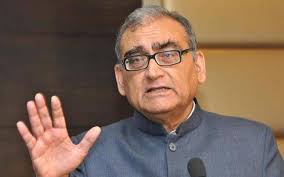 THE mad major portrayed in Stanley Kubrick’s Dr Strangelove — a psychopathic American nationalist driven by an urge to bring the world to a sudden end with nuclear war — has many cousins.

Ayatollah Khomeini was reviled as a warmonger, but he jailed the Hojjatiah Shia extremists who supported him. He found that they were plotting to chuck an incendiary bomb into the Soviet Union to start a global war. The pious clerics would go to heaven and the rest of the world would rot in hell, the Hojjatiah believed.

An elderly Christian lady in Delhi came cheerfully to her daughter’s home one day. She wanted the last family breakfast because Korea’s Reverend Moon had prophesied that the world in accordance with a biblical projection was coming to an end by noon — Indian standard time. Her joy at the imminent end of the world was subsequently shared by ardent Christian advisers of George W. Bush when they placed all their bets on the Iraq invasion.

In an interview a few years ago, K. Sudarshan, the erstwhile head of the Rashtriya Swayamsevak Sangh, spoke of a nuclear war with Pakistan as a possible way to “end the sway of evil in the world”. The latest issue of the RSS magazine has called for an all-out war with Pakistan.

Before lynch mobs and TV channels turned into clearinghouses of Indian nationalism, India was a more self-assured nation.

Before lynch mobs and TV channels turned into clearinghouses of Indian nationalism, India was a more self-assured nation. In easier democratic days, nationalism never had a single definition.

Gandhi was celebrated as a first among nationalists. So was his killer on the other side. Indian nationalism was as mixed like that. Men owing allegiance to Nathuram Godse’s brand of nationalism killed Gauri Lankesh and her fellow ‘Hindu apostates’. Hardly surprising, since Godse’s comrades had distributed sweets and celebrated the assassination of Gandhi with revelry. An overwhelming majority of today’s warmongers belong to this stable of Indian nationalists, and Prime Minister Narendra Modi commands support from the group.

Two episodes from history make the Congress look significantly more agreeable than the Hindu right. For all the propaganda about the Indian military’s aloofness from politics today, it was Jayprakash Narayan (or JP), his movement shored up by the Hindu right, who had exhorted the Indian armed forces to disobey the orders of then prime minister Indira Gandhi.

People may not remember the episode, but it was a factor in the imposition of the emergency. One doubts whether the Congress would ever have the gall to make such a call. Earlier, according to declassified CIA files, it was the right-wing Hindu nationalists that tried to assassinate India’s first army chief in an ethnically divisive plot. Fortunately, it failed.

On the other shore of politics, there was a tradition of an open-minded nationalism that luckily remains assertive in vast spheres of politics. Mamata Banerjee (Brahmin), Mayawati (Dalit), and Lalu Yadav (who belongs to the lowest rung in the caste order) are all leaders with cross-cultural followings. What unites them is their staunch faith in India’s agreeable constitution, which currently translates into a sharp critique, even wariness, of Modi’s brand of nationalism.

It is hardly a surprise that all three have questioned the expediency of taking India to the brink of a full-blown war with a nuclear-armed neighbour. They are expected to lead the fight to defeat right-wing nationalism in the coming elections.

There were no lynch mobs when justice Anand Narain Mulla of the Allahabad High Court wrote Urdu poetry. He got into trouble with Lohia’s socialists when they objected to a verse that described a drop of ink from the artist’s quill as a shade worthier than a martyr’s blood: Khoon-i-shaheed se bhi hai qeemat mein kuchh siwa/ Fankaar ke qalam ki siyahi ki ek boond.

It’s an old story from the 1960s, and as far as one can remember, Mulla rebuffed all demands for an apology. On the contrary, he was applauded by a large section of Indians when he noted in a judgment that the country’s police force was the most organised gang of criminals.

Mulla’s intellectual clone and a fellow Kashmiri Pandit, who is among India’s more combative public intellectuals, is justice Markandey Katju. He retired from the Supreme Court some years ago, and, like Mulla, loves Urdu poetry — particularly Ghalib and Faiz and Josh. Katju is an outspoken critic of India’s hard-line policies in Kashmir and slams militarist politics over the past decades that he says have alienated 99 percent of Kashmiris from India.

In an interview available on YouTube, he has described what he calls a guerilla war in Kashmir with a resemblance to the Vietcong whose cadre derived sustenance from a sea of alienated people. Unlike Katju or Mulla, Rahul Gandhi underscores his Brahminical lineage, something he didn’t need to do at all. A Hindu priest was recently requisitioned to announce him as a thread-wearing Kashmiri Pandit of the Kaul family.

The difference here is that Mulla and Katju relate to Nehruvian rationalism, whereas the young Congress leader, a great-grandson of Nehru, has painted himself — or been pushed — into a corner packed with bovine politics and competitive nationalism, in contrast to the party’s more progressive past. His confusion revealed itself on two key occasions. He told US ambassador Timothy Roemer, according to WikiLeaks files published in 2010, that India faced a bigger threat from Hindu extremists than from Indian Muslims. But he spoiled the wisdom of the moment by boasting at a whistle-stop meeting during a state election in Uttar Pradesh — which he lost — that his grandmother broke Pakistan into two.

Rahul evidently doesn’t see how Pakistan-bashing quickly becomes a communal expedition. A slogan out of Ayodhya, after the Babri mosque was razed in December 1992, yelled that the next halt would be Lahore. That was decades before a suicide bomber killed 42 paramilitary men in Pulwama, and India responded by crossing Pakistan’s airspace to poke the nuclear-armed neighbour in the eye.