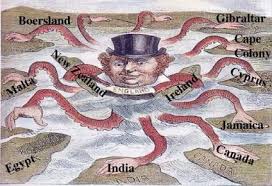 There is a historical precedent to contemporary American corporate lobbying in the British East India Company. It begins with the East India Company. Historian William Dalrymple’s new book, The Anarchy: The East India Company, Corporate Violence, and the Pillage of an Empire, details how the joint-stock company, chartered in 1600, went on to conquer India in the 18th century. Dalrymple indicts the Company’s looting of India as “the supreme act of corporate violence in world history.” They couldn’t have done it without the help of the British state—or without the invention of corporate lobbying.

The income from spices, tea, cloth (and taxes paid on these) became a substantial part of the British economy.

From the beginning, there was an intimate connection between the Company, the Crown, and Parliament. The Company began with Elizabeth I’s approval. Her royal charter gave the East India merchants vast powers. The income from spices, tea, cloth (and taxes paid on these) became a substantial part of the British economy. Royals, politicians, and, perhaps more to the point, British armed forces all worked with the Company to help it colonize the Indian subcontinent.

“Lobbying” in the political sense is an American coinage from the nineteenth century. The historian Arnold A. Sherman calls the East India Company’s 17th-century version of influencing politics “pressure from Leadenhall.” Leadenhall Street, in London, was the address of the Company’s headquarters.

During the reign of Charles II, commercial competition with the Dutch bedeviled English merchants. The East India Company was already powerful, its fleet large, but it didn’t have a navy. And only later would it be able to put up armies of mercenaries. In the 1660s, the Company needed the help of the state to take on the Dutch.

The profits from Asian trade gave the Company a lot of political muscle, and they loaned vast amounts to Charles II. In the late 1670s, these transfers were turned into outright gifts. “These grants became a kind of business expense, needed to help the Company maintain its powers and privileges,” writes Sherman. This “fiscal symbiosis” continued with successive royals.

For less royal supporters, the Company had “financial inducements and personal influence.” Some Members of Parliament were Company investors. Some of these later became prominent in the Company. At the same time, Company officers were also sitting members of Parliament. With all of these developments in place, it’s little wonder that “the improvement in the Company’s fortunes and the content of England’s commercial and foreign policy came to be closely interwoven.” As Sherman puts it:

The East India merchants were by no means the only traders in England hurt by Dutch competition. But they played a key role in turning commercial rivalry in Asia into a matter of national concern, a basis for government policy formation, and ultimately a justification for war.

Anglo-Dutch wars were waged throughout the late 1660s, with the Royal Navy emerging as the strongest fleet in the world. The East India Company, meanwhile, just kept growing, becoming a major part of the British economy, and the corporate ruler of the Indian subcontinent. What Adam Smith initially called “a strange absurdity” was, by the 1770s, a company too big to fail. Famine in Bengal and financial crisis in Europe resulted in an unprecedented state bailout for the near-bankrupt company.

Edmund Burke warned against the dangers of monopolies: “This cursed Company would, at last, like a viper, be the destruction of the country which fostered it at its bosom.” It’s a warning that echoes today, when we consider the power of Facebook, Amazon, ExxonMobil, and other immensely powerful profit-making entities.