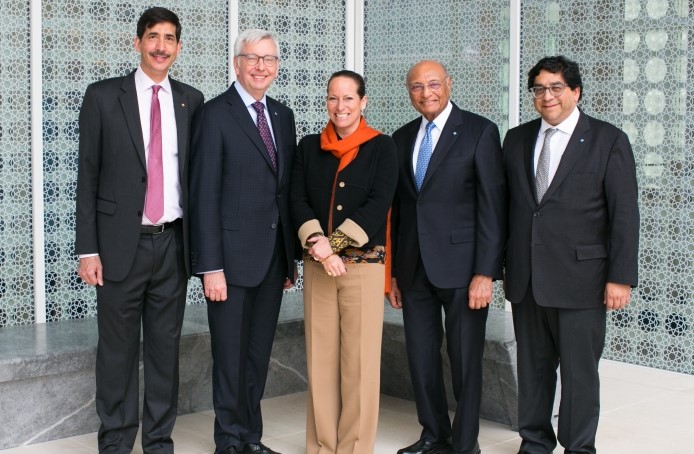 Cambridge Trust and the University of Central Asia signed an agreement extending their partnership to develop faculty across Central Asia for a further three years.

The head of the Cambridge University has underscored the importance of freedom of enquiry on campuses.

“The spirit of free enquiry that underpins higher education does not flourish behind closed doors,” Vice-Chancellor of the University of Cambridge, Professor Stephen Toope said in his keynote address on “Internationalisation of Higher Education and its Role in Development” at the Aga Khan Centre in London on Wednesday.

According to Professor Toope, the greatest leaps in knowledge occur when disciplinary and geographical boundaries are crossed.

“Internationalisation in higher education is, of course, well exemplified by the Aga Khan Development Network, and its educational agencies in Central Asia, Pakistan, and East Africa,” said Professor Toope.

“Globally influential universities must harness the power of strategic partnerships. The inspirational choice of mountain regions for the three campuses of the University of Central Asia, and the generous financial support is given to students who could not otherwise afford a university education.”

Professor Toope said that the university is contributing significantly to the intellectual and economic development of the relevant regions.

He continued, “Let us never forget how our universities’ missions and our universities’ pools of talent allow us, perhaps more than any other type of institution on this planet, to create, curate, and communicate the knowledge that can help to improve the world.”

Earlier the Cambridge Commonwealth, European and International Trust (Cambridge Trust) and the University of Central Asia (UCA) signed an agreement extending their partnership to develop faculty across Central Asia for a further three years.

The agreement builds on an earlier collaboration signed in 2017 and will enable outstanding students from UCA and the surrounding regions of Central Asia, to gain a Masters or PhD degree at the University of Cambridge.

Following the keynote address, UCA Rector Professor Dr Syed Sohail H. Naqvi provided an update on the journey of his university to establish itself as a world-class educational institute in Central Asia, conducting contextually relevant research and working with AKDN agencies to impact the quality of life of regional mountain communities.

“The University of Central Asia is committed to offering high-quality education to its undergraduate students, and fostering the development of qualified Central Asian faculty to deliver its programmes,” he said.

“The UCA-Cambridge Scholarships provide a unique platform for exchange, and through the renewal of this agreement, we will continue making a positive impact in building capacity of educators in the region.”

Speaking on the occasion, Helen Pennant, Director of the Cambridge Trust, said: “Following a decade of excellence in partnership, I am delighted to renew this valuable collaboration which will enable more talented students from Central Asia to come to Cambridge.”

We are proud to partner with the UCA to develop faculty and the communities they serve, added Barbara Stocking, Acting Chair of the Cambridge Trust.

These scholarships are part of UCA’s ongoing Central Asian Faculty Development Programme (CAFDP) designed to ensure that scholars from the region are strongly represented in UCA’s faculty.

Applicants must meet eligibility benchmarks of UCA, and the admissions criteria of Cambridge. This partnership between the UCA and the CT builds on the quality and standing of both the universities to enhance the academic quality of UCA’s future faculty.

The UC, the CT and the UCA share a commitment to academic excellence and the application of knowledge for wider social good. It is intended that these partnerships will enable joint research in areas of importance to Central Asia for the benefit of scholars and researchers at both institutions and the agencies of AKDN globally. The Trust provides the largest number of scholarships for international students at the UC, working with partners worldwide to support students of outstanding academic merit under a variety of scholarship schemes.

The UCA was founded in the year 2000 as a private, not for profit, a secular university under an International Treaty signed by the Presidents of Tajikistan, the Kyrgyz Republic and Kazakhstan, and the Aga Khan; ratified by the respective parliaments and registered with the United Nations.

It is a unique institution of higher education focused on the development of mountain societies, with its School of Arts and Sciences residential campuses in Naryn (Kirgizstan) and Khorog (Tajikistan). The Tekeli campus in Kazakhstan is currently in the planning phase.

UCA’s Graduate School of Development has three research institutes, and its School of Professional and Continuing Education has graduated over 150,000 learners since 2006.