A confidential letter by the Cybercrime Wing of Pakistan’s Federal Investigation Agency (FIA) on March 13 said that the organization had launched inquiries against journalists Matiullah Jan, Murtaza Solangi, Aizaz Syed, Ammar Masood, and Umer Cheema for “disrespecting” the Saudi leader during his visit to Islamabad on February 17 and 18. The letter also names exiled blogger Ahmad Waqas Goraya and three Shia groups opposed to Saudi Arabia.

“These activists displayed the picture of murdered Saudi journalist Jamal Khashoggi on their social media profile DPs [Display Photos] which conveyed a very disrespectful message to the visiting dignity,” the letter said.

Sources in the FIA confirmed to RFE/RL’s Gandhara website that the letter was authentic. Pakistan’s leading English-language daily Dawn also said that sources within the FIA had independently confirmed the authenticity of the letter.

A confidential letter by the Cybercrime Wing of Pakistan’s Federal Investigation Agency (FIA) on March 13 said that the organization has launched inquiries against journalists.

“A targeted social media campaign was planned/executed against the [crown prince’s] visit, during which [a] few social media activists and groups remained particularly consistent/active till the very last day of the visit,” the letter noted.

Last October, Khashoggi was killed in Istanbul after entering the Saudi consulate. After initial denials, Riyadh confirmed that the dissident journalist was inside its consulate. Saudi Arabia, however, has denied the country’s crown prince ordered or was involved in the murder.

Veteran journalist and former Executive Editor of The Express Tribune M. Ziauddin said “Journalists and media persons at large should collectively condemn the government minions that have taken upon themselves to issue judgment on the professional work of the six media persons listed in the notification.”

Noted academics and peace activist A.H. Nayyar said: “I cannot imagine this happening in a democratic society. Cases should be filed against these officials for contravening the right to freedom of expression.

Solangi, one of the journalists named in the letter, reacted strongly. “This is preposterous,” he told Gandhara. “It looks like the Imran Khan administration is trying to appease its new bosses, the Saudis.” 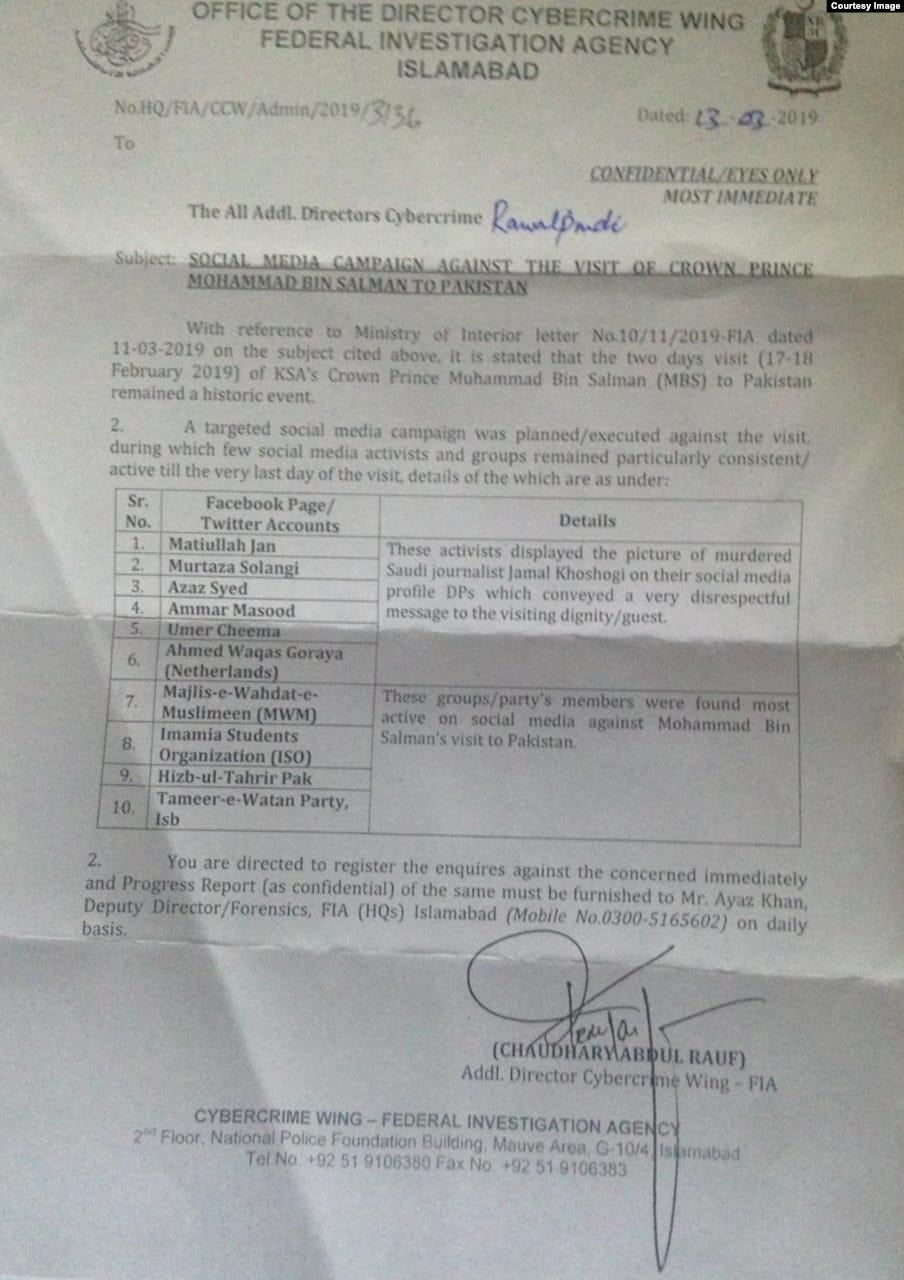 He said that inquiries ordered in the letter violated Pakistani laws and international conventions and thus amounted to killing the freedom of expression. “Media in Pakistan was already muted and silenced, and this is a fresh attempt to make Pakistan look like an appendage of the Saudi monarchy,” he said.

Masood, another journalist named in the letter, questioned whether Pakistani journalists would now be punished for changing their display photos. “Freedom of expression is under real threat in Pakistan,” he wrote on Twitter.

Global press freedom watchdog the Committee to Protect Journalists condemned the move. “Pakistan’s FIA should stop harassing journalists over social media posts,” the organization wrote on Twitter. “Is there any wonder why journalists wave the flag of Jamal Khashoggi? He was one of them, murdered for his work.”

Amnesty International Deputy South Asia Director Omar Waraich also questioned the official probe against the journalists. “They [the FIA] say honoring a murdered journalist is disrespectful to the murderer,” he wrote on Twitter.

In the message sent to the FIA, Netherlands-based blogger Goraya said he will continue his campaign. “I am a Pakistani citizen and I am fighting for democracy and rule of law in Pakistan,” he wrote in the text message, which he said was sent to FIA officials. “We want a Pakistan free from fear and terror and a Pakistan where all citizens are equal.”

In January 2017, Goraya, an IT consultant, disappeared for three weeks along with four other secular activists in Pakistan. Human rights campaigners then blamed Pakistani intelligence agencies for detaining them. Pakistani authorities, however, denied holding the activists.

Currently, Pakistan is ranked 139th out of 180 nations in Reporters Without Borders’ 2018 World Press Freedom Index. Journalists and activists in the country complain of censorship and rapidly declining space for freedom of expression with the civilian and military authorities seeking to control the press and social media. — Additional input from RFE/RL