HRCP, AKHSP conduct training workshop for reporters about gender issues; code of ethics to be developed for local reporters

GILGIT, March 2: Media persons, government and civil society officials have stressed the need for creating awareness about gender-sensitive issues in media and society to curb violence against women.

They also called for enhancing the capacity of local reporters on gender-sensitive reporting and developing a code of ethics for media.

“Gilgit-Baltistan government will take steps in enhancing the professional capacity of media persons in highlighting social issues and reporting gender-sensitive issues,” Fida Hussain, the secretary information, said while speaking as chief guest at the concluding ceremony of a workshop for local reporters.

He announced that he will also take action against those media houses which did not pay equal wages to female journalists.

Gilgit Press Club president Khursheed Ahmed also stressed the local reporters to develop a code of ethics for reporting on the gender-sensitive issues.

The two-day training workshop on sensitization and reporting on gender-based violence was arranged by the Aga Khan Health Services (AKHSP) in collaboration with the Human Rights Commission of Pakistan’s (HRCP) GB chapter and local press club on February 28-29 that was attended by 20 journalists.

On the first day, Yasmeen Karim, a gender expert, and facilitator of the session elaborated the topic in detail.

“Without proper sensitization of male members of society we can’t curb the gender-based violence or violence against women,” she noted.

She highlighted the sexist vocabulary used by Pakistani media with impunity and stressed on use of gender-sensitive words.

She also conducted group activities for the participants. 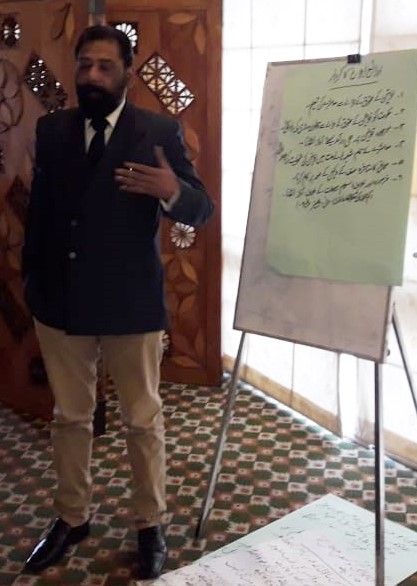 On the second day, HRCP Coordinator for GB Israruddin Israr facilitated the session and shared the material on the topic developed by the premier rights body of Pakistan.

While explaining the topic, Mr Israr said: “Gender discrimination and gender-based violence are the results of patriarchal and feudal mindset. Media can play a pivotal role to change the anti-women traditions and mindset of society.”

He also shared the state of gender-based violence in Pakistani society and the mountainous region.

He emphasized the enforcement of laws to prevent violence against women in GB.

Speaking to The High Asia Herald, Mr Israr said: “The workshop was aimed at sensitizing local reporters on gender-sensitive reporting.”

Media instead of highlighting the abuse, exploitation and real problems of women, spreads negativity about them, he commented

“Sadly, majority of media outlets, particularly Urdu media portray women’s negative role in our society; they are insensitive about gender violence and use vulgar and misogynist vocabulary while reporting any news about women promoting anti-women sentiments in society,” he noted.

He stressed the need for arranging such events for journalists frequently to sensitize them on gender issues so that they could play a proactive role in creating awareness among the people against GBV and the promotion of women’s rights. “Womenfolk are the most vulnerable and exploited segment of society. We can’t build a prosperous and peaceful society without ensuring equal opportunities for women who make almost 50 percent of the population.”

He expressed his satisfaction with the outcome of the event as the participants agreed to develop a code of ethics for gender-sensitive reporting.

The participants in the two-day workshop discussed gender analysis framework, media’s perception about and portrayal of women, early memories of being male or female, gender role expectations, defining gender versus sex, institutional/systemic influences on gender stereotypes.

The participants also discussed perceptions of women and men, strategies for eliminating gender stereotypes and barriers.

They also discussed how to define GBV and VAW ethics, their various forms and intensity, flaws in reporting on women, and how to improve knowledge and skills and gender-sensitive media ethics as well as local laws.

The participants shared their experiences and knowledge on the topic in their presentations after carrying out group work.