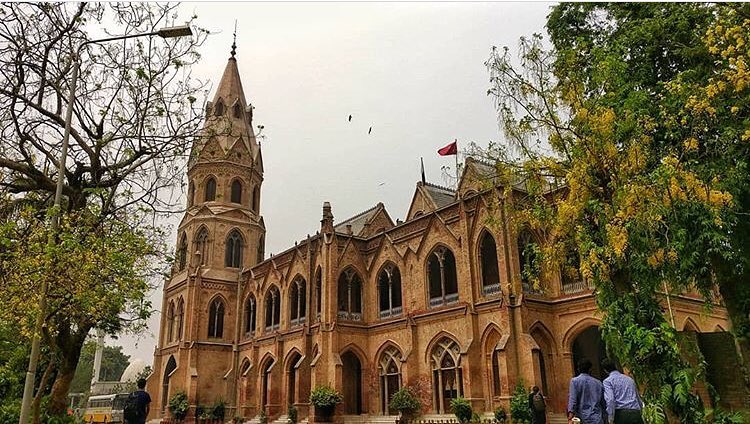 Lahore: The termination of a young academic of the Government College University (GCU) Lahore has prompted a strong reaction from academia, students and activists on social media.

The services of Zaighum Abbas, who had been teaching political science at one of the oldest and largest higher learning institutes of Pakistan for the last four years, has been terminated mid-semester without prior notice and valid reason.

The first-ever faculty member of GCU from Gilgit-Baltistan, Mr Abbas had been teaching students dedicatedly and encouraging critical thinking — something unacceptable for the pro-establishment rightwing elements dominating the faculty and administration in almost every major university in Pakistan.

“My four years teaching at Government College University as a contractual faculty member has come to an end,” stated Mr Abbas in a Facebook post. He stated that his contract was not renewed while informing him verbally that the decision has been made for his being vocal on political issues.

“Apparently, they expected me to teach political science without being political at all,” he quipped and said that he was yet to receive a written notice of termination.

Mr Abbas lamented that our higher education system is gradually criminalizing dissent and difference of opinion in the most blatant manner.

He urged his fellow academics to come together and build a resistance movement against the attacks on academic freedom and freedom of expression on campuses.

“Despite the usual politicking and petty maneuverings by small men in big offices, I was able to engage students in study circles and critical debates,” he added.  The young academician said that engaging with students from diverse cultural backgrounds, like Sindh, Balochistan, Khyber-Pakhtunkhwa (KP) and Punjab, was truly an amazing experience for him while hailing from a peripheral area himself.

He said that encouraging rational debate and cultivating a cultural dialogue was something unbearable for the retrogressive elements on campus. However, the messages of solidarity and love that he has received from the students have been something he was feeling elevated about.

He said that the act of his termination was not an isolated event at GCU and such coercive practices are being allowed continually which is the highly unfortunate reality.

Dr Ammar Ali Jan, an academic and rights activist, while commenting on the decision of GCU, said Zaighum Abbas has been targeted for speaking on students’ rights on campus. He said he was quite perplexed about how one could be expected to teach political science without discussing politics.

Jan said that Abbas was encouraging students to raise questions about their fundamental rights and that has been the sole reason to remove him which is a condemnable act on the part of the administration.

His “crime”, the HKM head stated, was that he taught critical thinking to his students and defended their constitutional right to dissent.

Mr Jan who was also fired from the same university in 2017 for raising voice for Mashal Khan and against sexual harassment on campus, said: “Zagum and I were never given notices before being fired”. Contractual workers remain the most exploited workforce on campuses. We will fight back, Dr Jan added.

According to Dr Jan, “teachers who speak for rights are targeted. Critical thinking is under attack on campuses.”

The movement warned that they will launch a campaign for Mr Abbas’s reinstatement and other academics as well as workers who are exploited under the garb of contractual labour.

“I worked at GCU from 2000 to 2010. During my tenure, three teachers were fired because they were progressive thinkers. GCU admin is always scared of such teachers and their influence on students. It’s sad that the situation hasn’t improved still,” commented Javeria, another former member of the GCU faculty on twitter.

Aziz Ali Dad, a writer, and social thinker from GB condemned the GCU decision and said Zaghum Abbas has been sacked because of his political views and activism on stupid logic of being political in the political science department. Universities are seats of higher learning and supposed to produce knowledge and ideas.

It is this Promethean light of knowledge from universities that illuminates the society in the darkness outside.

“Alas! The process is inverse in our state and society as the darkness in the society and dark forces outside are permeating into the islands of knowledge. Thus, extinguishing the flickering light of hope in a few islands of knowledge surrounded by an ocean of bigotry and ignorance,” he commented.

Perhaps, this country is infected by the mental coronavirus and soon it will be mentally quarantined by the rest of the world because of the virus-infected minds of our institutions.

He expressed solidarity with the lecturer and said, “we are with you Zaghum. Live up to the meaning of your name like a lion.”

Amir Hussain, a columnist, and political commentator in his reaction on his Facebook page said “we live in one of the worst times in terms of freedom of expression and critical thinking in the history of Pakistan.

GCU, a public research institute was established in 1861, was given university status in 2002. One of the top ten institution in Pakistan with a student body of over 12,000, GCU is noted for its historical roots and notable literary giants and scholars such as Allama Iqbal, Faiz Ahmed Faiz, Patras Bukhari, Sufi Tabassum,  Professor Saadat Saeed, Nobel laureates — Har Gobind Khorana (medicine 1968) and Dr Abdus (Physics 1979) — former president of the UN General Assembly and the International Court of Justice Zafarullah Khan, and Justice Javed Iqbal (late), and many more.