As the temperatures rise in the summer season in Gilgit city, so does the level of turbidity and bacteria thus spreading typhoid and other water-borne diseases, says a report.

The citizens of Gilgit city are consuming “highly contaminated” water, says a report released by the environmental watchdog of the mountainous region.

According to the report “Drinking water contamination and spread of typhoid”, released on June 9, all 18 samples collected from different areas of the city were found highly contaminated.

The report, prepared by the Gilgit-Baltistan Environmental Protection Agency (GBEPA), says that the levels of turbidity and bacteria in the drinking water being supplied to the 0.5 million inhabitants of Gigit city from Barmus and Jutial water supply complexes have increased alarmingly which are main causes of the increase in typhoid cases in the city.

“All the 18 samples collected from water storage tanks outlets of Barmus and Jutial Water Supply Complexes, domestic water taps from different locations, and community taps are heavily contaminated,” it said.

Typhoid coupled with the coronavirus has worsened the situation in the Covid-19 hotspots of the city. The GB has witnessed a spike in coronavirus cases in the last two weeks after Eid. 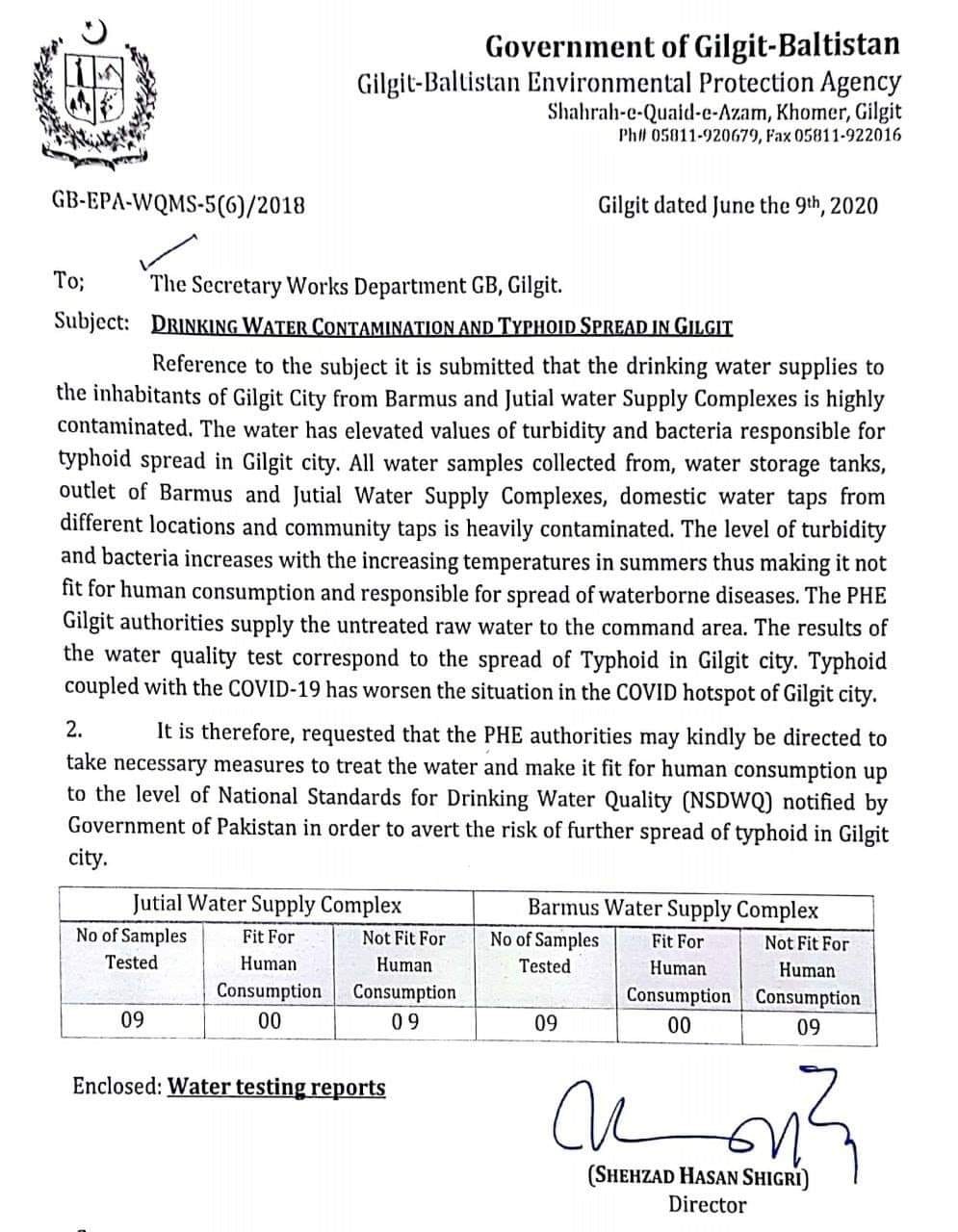 The GBEPA has submitted the report to the secretary works department with a request to direct the PHE officials to take immediate measures to treat the water and make it fit for human consumption as per the level of National Standards for Drinking Water Quality to avert the risk of further spread of typhoid in the city.

Glacier water is the main source of drinking water in almost all districts of Gilgit-Baltistan.

According to research reports, even the glacier water is unsafe for drinking purposes if turbidity is higher then permissible level.

“Human and other animals are the major cause of interference and water pollution,” says the research conducted by Arshad Ali Shedayi and Nazia Jan.

The high fecal coliform quantity indicates that the water especially open channel water is unsafe for drinking and it may cause water-borne diseases.

Many physic-chemical and bacteriological parameters in Gilgit city and suburbs like Danyore, Sultanabad, Oshkhandas, do not meet the WHO standards.

Drinking water especially open channel water is polluted by anthropogenic activities. Water-born diseases are common in the city and surrounding areas posing major health risks for the population.
According to the researchers, the consumption of untreated water is the primary cause of most of the diseases in Gilgit-Baltistan.

They have recommended that awareness among the people about water quality and treatments should be initiated on a priority basis. They have also recommended the installation of treatment plants in each town and village and intensive research on water-borne diseases.