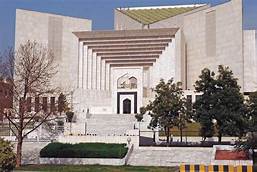 Islamabad: The government’s top counsel on Thursday resigned from his post. He submitted his resignation to President Arif Alvi, media reports said.

In his resignation letter, Khan said: “I note with profound regret that the Pakistan Bar Council, of which I am the Chairman, has demanded through its press release dated 19th of February 2020 that I resign forthwith from the Office of the Attorney General of Pakistan.”

Khan said he was a lifetime member of the Karachi, Sindh and Supreme Court bar associations and wanted to “reaffirm faith in the highest principles of integrity and professional excellence that the Pakistan Bar Council has always stood for.

“Accordingly, I hereby resign from the position of the Attorney-General for Pakistan and request you to accept it with immediate effect,” he wrote.

But according to media reports Khan was forced to resign by the federal government.

The development comes a day after the Supreme Court ordered Khan to tender an apology or come up with “some material” on the basis of which he made certain remarks that concerned members of a bench that is hearing a set of pleas challenging the presidential reference against Justice Qazi Faez Isa.

“As [a] certain statement was made by the AG about the bench yesterday, it would be appreciated if the material on the basis of which the statement was made is placed on record before the bench,” a visibly disturbed Justice Umar Ata Bandial said while dictating the order at the end of Wednesday’s hearing.

Pakistan Bar Council (PBC) vice-chairman Abid Saqi and Supreme Court Bar Association (SCBA) President Syed Qalbe Hassan had earlier condemned the AG’s statement and decided to move a contempt of court petition against him as well as Law Minister Farogh Naseem as the ‘highly objectionable’ statement made in the law minister’s presence.

In a statement, PBC vice-president had asked the attorney general to submit an unconditional written apology along with his resignation for his “unbecoming conduct”.

The statement added that the PBC would not tolerate any government-sponsored attempt to undermine the independence of the judiciary and the process of dispensation of justice.

Meanwhile, the federal government also distanced itself from Khan’s statements and asserted that the comments were totally uncalled for, unauthorised, without instructions and knowledge of the government.

Meanwhile, a response submitted on behalf of the government in the Supreme Court said the “oral statement” made by Khan on February 18 was “unauthorised, without instructions and knowledge of the federal government and the answering respondents, and totally uncalled for”.

On August 31, 2018, Khan was appointed attorney general for the second time. He earlier served in the position during the tenure of the PPP government. He resigned from the post on April 2, 2010, after reportedly developing differences with the then law minister, Babar Awan.

He was appointed judge of the Sindh High Court in October 2000, but resigned from the position on Oct 3, 2001, to rejoin a law practice.

The Supreme Court on Wednesday had directed Khan to produce evidence supporting his statement or submit a written apology about his controversial statement regarding SC judges, for which he had been reprimanded by the court as well.

According to The Express Tribune, the government had already decided to replace the AGP.

A senior PTI lawyer told the newspaper that the Pakistan Tehreek-e-Insaf government was looking for a new chief legal officer but could not find a better option.

Renowned lawyer Makhdoom Ali Khan has already turned down the offer to take over the position while Naeem Bukhari is ‘uninterested’. However, the federal government has a few other names under consideration.

Reportedly, certain individuals within the ruling party were critical of the legal team since November 2019. They argued that the Khan-led team was neither making progress in key matters pending before courts nor helping build a cordial relationship with the superior bars.

In his opening remarks in February 18 hearing, Khan had stated: “I try to act with some grace. I am aware in [sic] my personal knowledge and I say this because there was [an] unprecedented attack on [a] few judges before this court for them to recuse earlier which I thought was not a fair thing. It was trying to find a convenient court. It is in my personal knowledge as [to] how this petition was drafted and who was privy to this petition, my lords but despite this, I will not object to anyone sitting on [sic] this court. I am not going to object [to] anyone. This is [a] fact.”

The AGP was forced to retract his statement as it drew the ire of the judges.

The apex court decided to take up the matter on February 19’s hearing. Following the court proceedings, the PBC decided to file a contempt petition against Khan and Law Minister Dr Farogh Naseem over the chief legal officer’s statement.

The proposed petition read that the AGP had intentionally made the statement before the court which was proof that the process of “surveillance of judges” was still underway.