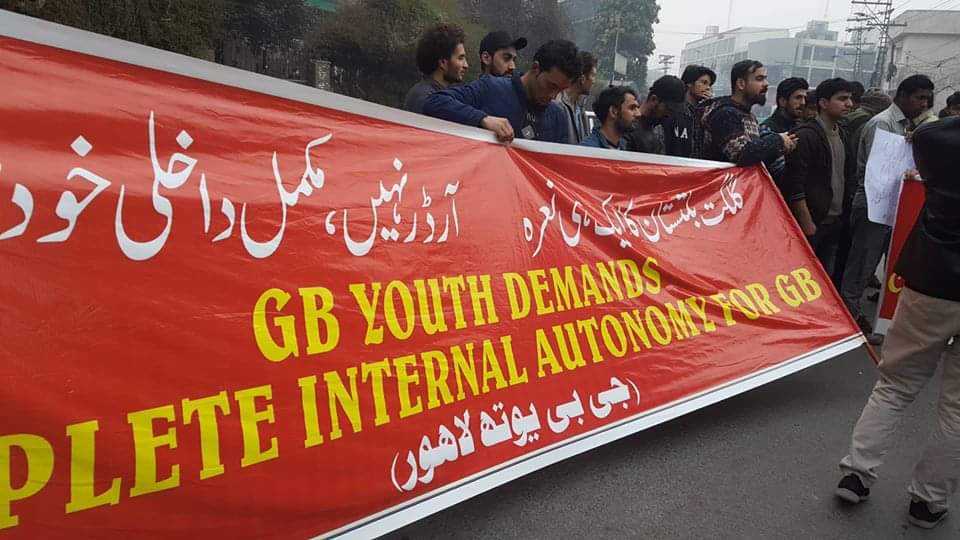 It has now become a part of mass consciousness that Pakistan-administered Gilgit-Baltistan (GB) is a disputed territory. The chequered political history of GB has been an important reason (among others) that the case of GB itself could never be presented in a way that does it justice.

But what is the best context to understand the Gilgit-Baltistan’s question and the political future of its people?

Let’s take a look at what happens when GB’s issue is inseparably linked to the overall Kashmir dispute  – and the many complex considerations that inform the views of the local population.

In Gilgit-Baltistan itself, people often have an approach to these questions that is significantly coloured by region’s sectarian divide. In fact, the sectarian divide – often sharpened by a “Third Player” as required – played an instrumental role in keeping people away from each other rather than uniting to struggle for a collective cause. Therefore, the fear of  that “Third Player” has become an overriding concern for the population, leaving them with their own distinct anxieties.

The majority of the Shia population in GB tend to reject any kind of association with Kashmir. To them, it would be a worrying prospect to become a minority in the historical state of Kashmir. By contrast, a lot of the local Sunni population would likely to favour the association of GB with Kashmir – given that they are living in a zone that has been predominantly Shia.

The sectarian divide became far more pronounced after the series of international and local events that followed the 1979 revolution in Iran. As for the majority of Ismailis of GB, they have tended to favour the existing status quo rather than any sudden and risky changes in any direction – this attitude being in line with the perspective of their religious leadership.

And what of those who think beyond sectarian lines, and do not generally prefer to be described as some variety of “nationalist” either? Such people, too, are generally uncomfortable with viewing the GB question as part of the larger Kashmir dispute. Their concern stems from the past where GB was annexed by the Dogra dynasty with British assistance. Dogra domination was experienced by many in GB at a time when they were deprived of their basic right to govern their lives in their own way.

Having pointed out the sectarian angle and local concerns, it is also a fact that the political and national question of GB is internationally recognized only as part of the Kashmir dispute. The association is not easy to escape.

But the question is: what does this linking mean for the people of GB?

One of the drawbacks of viewing GB’s problems as part of the Kashmir dispute is that such an approach undermines the distinct identity of the region. It is unlikely that the over 2 million people of GB will be eager to recreate the past which still haunts their present and future.

It would be hard to argue that the people of GB and Kashmir constitute one national group – the only important common point being that they are Muslims. And as we know, Muslims exist all across the globe and yet they are by no means all the same nation.

Generally for being described as a “nation” the populace of a region needs to have affinities in one or more of the following: origin, identity, race, culture, ethnicity and history. It is difficult to find heterogeneity on these counts even within GB itself! Let the reader imagine how much more difficult it would be to foist a larger Kashmir-centric national identity on to such a diverse population!

Unlike the archetypal European nation states, GB does not have the option to form “one nation” – whether by itself or as part of a larger “Kashmiri nation”.

In any case, in democratic nation states today, primordial identities of the kind mentioned above are not the main markers of nationhood. Instead, people are called upon to view their nationhood on the basis of citizenship rights granted by a mutually agreed upon constitution – that is to say, a social contract based on equity, peaceful coexistence and self-determination.

If GB has to be associated with Kashmir, only such an approach towards nationhood seems workable.

Today, regardless of repression from the power-wielders, various nationalists from GB and progressive forces are demanding restoration of the State Subject Rule (SSR), abolished by Pakistan in 1974. But their demand is untenable without first accepting that GB was part of the historical Kashmir State.

It also begs the question as to whether the people of GB would be content to become merely a “state subject” in the future. There are those who see the erstwhile State Subject Rule (SSR) as a colonial instrument in GB – one which was imposed without legal grounds except the assumption that since GB was the third province of the Kashmir State, the SSR ought to be automatically extended there.

Arguably, however, it would be unfair to blame the local people for failing to come up with a better alternative than the demand for restoring the SSR. Even if SSR was merely a structural adjustment in the colonial project of the British, today there are many who would make the case that it serves the interests of the people of GB.

Such are the nuances of the debate within GB about the future of its people.

GB can maintain its distinct national identity based on its territorial boundaries which remained under the administrative control of Pakistan for the last seven decades. And with all the lessons learnt from history, the region is now in a position to move ahead wholeheartedly to work out a social contract that is based on the “principle of equality” with Kashmir.

In the end of the day, a more participatory and consensual approach would be best not just for the future of Gilgit-Baltistan, but also for the rest of the territorial units currently linked with the Kashmir dispute – including Azad Kashmir, Jammu and Kashmir, Ladakh, Leh and Srinagar itself. There is no other way forward but for all the administrative units of the Kashmir dispute to be given equal opportunity and representation in matters which will decide their future.

Unfortunately, none of the countries involved in the region’s conflict have done so in the past.

This opinion article was first published in The Friday Times, Lahore

Mudabbir Ali is a political activist from Gilgit-Baltistan fights for people’s rights wherever, whenever it comes under threat. He tweets @MudabbirAli17.