Ikat is a fabric that got its name from the resist dye technique used to make its patterns. But Professor Elmira Gyul, Chief Researcher at the Institute of Art Studies of the Academy of Sciences of Uzbekistan, explains about ikat from a different perspective not as a unique artistic creation, but as a social phenomenon whose role has changed from one historical period to another.

The author, who is a lecturer in the Republican Scientific Consulting Center NC Uzbektourism, writes in the Voices on Central Asia.org that ikat fabrics are found among many peoples, including in Central and Southeast Asia, China, Japan, the Middle East, West Africa, and Latin America. But in Uzbekistan, specifically, the fabric became a kind of prestige symbol in the country’s culture.

The local name for ikat is abr fabrics (abr means “cloud” in Persian) since the patterns resemble light clouds floating in the sky and reflected in the water of a river.

In Europe, resist-dyed fabrics came to be called ikat, from the Malay term mengikat, meaning to “wrap” or “tie” (i.e. to tie the threads during the dyeing process to prevent selected areas from coloration). This name was given by European scholars.

Where and when did ikat first appear?

Unfortunately, this remains a mystery. Ikat possibly had one place of origin, but it is equally likely that it appeared in different regions and countries independently.

Interestingly, the characteristic effect of ikat—the vibrating colors flowing into one another—can also be found in the decoration of medieval paper (called abri in Uzbek, ebru in Turkish, suminagashi in Japanese), and in Chinese ceramics in a style called san qi. These parallels between abr fabrics, abri paper, and abri ceramics point out a new direction for studying the genesis of the abr style. 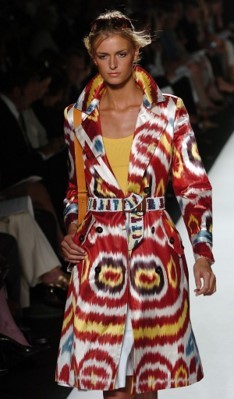 The effect of fluid colors created by abri/ebru paper also suggests a new possibility for the origin of the word abr: it may have come from the word abrang, meaning “watercolor.” Therefore, abr fabrics can most likely be translated as “watercolor fabrics.”