Sacks of flour stacked at a storage facility in Novosibirsk, Russia. Production of bread, grains, and pasta has been boosted in the Novosibirsk region due to increased demand amid the COVID-19 pandemic. 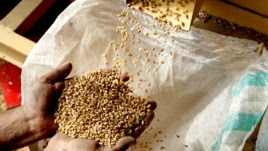 A Pakistani worker in Karachi sorts wheat grain on April 7 to make flour to keep people fed during the country’s lockdown amid the ongoing COVID-19 pandemic. Photo: Shahzaib Akber (EPA-EFE)

That strawberry you’re eating while self-isolating from the coronavirus?

Chances are it came from a farm. Or it may have come from a large agricultural operation many, many kilometres away from your home, harvested by hand, possibly by migrant workers brought in from other towns, cities, or even countries.

But can that system continue to bring you strawberries as the global coronavirus pandemic continues? Or bread? Pasta? Cooking oil?

The coronavirus has already sent the global economy into a tailspin, with tens of millions of people being put out of work, as factories from Wuhan to Bavaria to Michigan suspend operations.

What does this mean for the food we eat?

If you live in a rural setting in a temperate climate where the growing season is underway, you might be preparing to eat produce from your backyard or your dacha.

But if you live in a city – as more than half the world’s population does — chances are you rely on the global food supply chain to make sure your bread and milk, or noodles and bananas, are in stock at the market.

Could we be facing global food shortages in the coming months?

“Massive disruptions to global food supply system will result from the pandemic,” Chris Elliot, a professor at Queen’s University in Belfast, wrote in a post on Twitter.

Indian rice exports suspended as lockdown disrupts supply chain. This will hit the UK, not now but in a few months (I predict). Massive disruptions to global food supply system will result from the pandemic @FoodChainProf https://www.indiatoday.in/business/story/indian-rice-exports-suspended-as-lockdown-disrupts-supply-chain-report-1663745-2020-04-06 …

66 people are talking about this
Here’s what we know about how the coronavirus is affecting food supplies.

In mid-March, the pandemic was accelerating in most countries, even as a handful began to show signs of “flattening the curve” – the term used for slowing the rate of new infections.

But the stress on the global food supply system was already clear.

“A protracted pandemic crisis could quickly put a strain on the food supply chains, a complex web of interactions involving farmers, agricultural inputs, processing plants, shipping, retailers, and more,” Maximo Cullen, the chief economist for the United Nations’ Food and Agriculture Organization, warned in a paper.

Panic buying and hoarding in some places added to worries that retailers and wholesalers whose inventories might be small already could be wiped out.

“Global markets for basic cereals are well-supplied and prices generally low,” the program said in a report released on April 3.

“Disruptions are so far minimal; food supply is adequate, and markets are relatively stable,” spokeswoman Elizabeth Byrs was quoted as saying.

“But we may soon expect to see disruptions in food supply chains” if big importers lose confidence in the reliable flow of basic food commodities, she said.

For industrialized nations, whose food supply chains were already undergoing a shift due to changing consumer habits and tastes, that bodes for more uncertainty.

“We’re talking about a radical change to a food chain that was already going through a radical chain,” James Tillotson, a retired professor of food policy and international business at the Friedman School at Tufts University in the United States, told RFE/RL.

Who’s most at risk?

For major industrial nations, whose populations tend to be particularly concentrated in urban and suburban centres, the food supply chains are longer, more complex, and, possibly, more vulnerable.

For less industrial, more rural, and agrarian economies, supply chains tend to be shorter and simpler. If you’re not getting your eggs and milk from chickens and cows and goats in your backyard, for example, then you might be getting them from the farmers in the next village over.

Other commodity goods — such as wheat, corn, or soybeans — are sold and shipped in bulk, often over long distances. That means there are more points where the supply chain can be disrupted.

Add to that the fear factor: Consumers fearing the possibility of shortages rush to buy more than they otherwise would, thus causing the shortages they’d feared. Some food markets in Moscow, for example, reported shelves being emptied of ready-to-eat buckwheat.
That’s led some countries to cut back on food exports in a bid to ensure they have enough food for their own citizens.

In Kazakhstan, one of the world’s major exporters of wheat, the government has restricted exports of that commodity. Earlier, the government had suspended exports of other goods like onions, sugar, sunflower oil, and even buckwheat – a grain that has emotional resonance for many older Kazakhs and Russians as a way to ward off hunger.

Restricted supplies have pushed up prices, not only locally but globally in some cases.

In the Boston area, for example, the price of a dozen eggs has tripled in recent weeks, Tillotson said.

Higher prices and supply restrictions have created opportunities for black marketeers. Police in Kyrgyzstan this week detained shipments of milled wheat flour that was being smuggled out of the country in sacks labelled “cement.”

In an unusual public appeal, activists, academics, and a group of executives for some of the world’s biggest food-processing companies warned on April 9 that the number of people going hungry around the world could increase dramatically in the coming months. 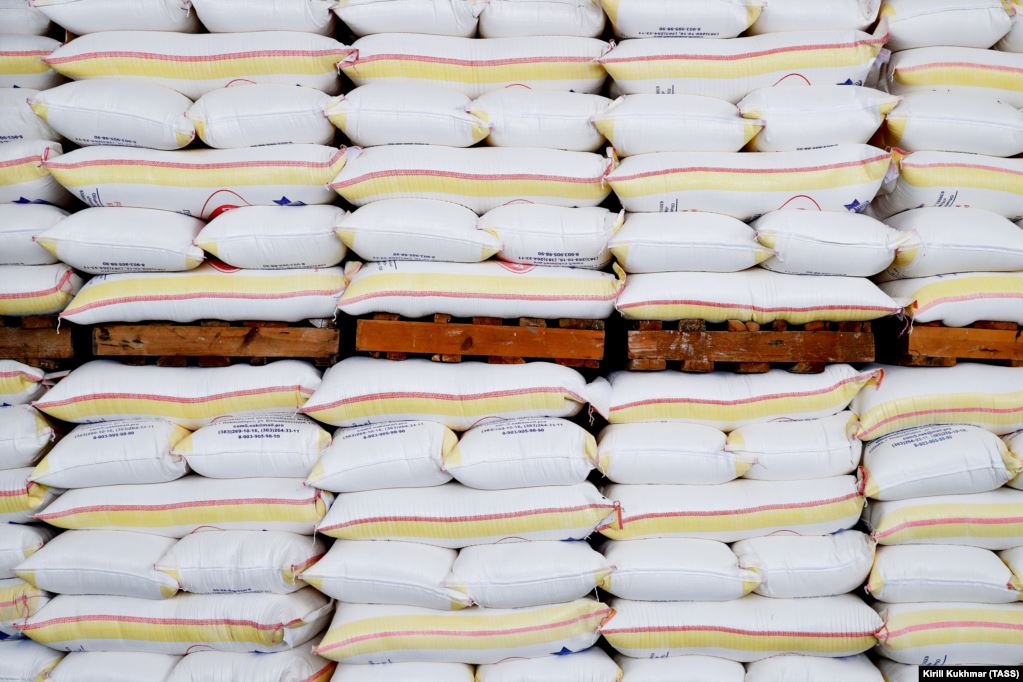 Sacks of flour stacked at a storage facility in Novosibirsk, Russia. Production of bread, grains, and pasta has been boosted in the Novosibirsk region due to increased demand amid the COVID-19 pandemic.

“There could not be a more important time in which to keep trade flows open and predictable,” according to the letter addressed to world leaders.

The letter urged food exporters to keep supplying international markets and also called for supporting populations most at risk of hunger, as well as investing in local production.

The process of picking crops and packing them for shipment is itself under stress, experts warned, as field workers struggle to get protective equipment to shield them from coronavirus infection or as workers are prevented from travelling to farms by lockdowns and travel restrictions.

“The issue of the health of the farm labour force as well as labour availability is one of the biggest challenges to production,” risk analyst group Fitch Solutions said in a March 25 report.

In the United States, migrant workers comprise the bulk of farm and agriculture labour. And in California, one of the leading U.S. states for producing food and agricultural goods, state officials have imposed a stay-at-home order to minimize people moving around and transmitting infection. That has affected farm labour.

The same holds true across Europe, where farms are doing spring planting and struggling to find workers to pick crops like strawberries and lettuce after border closures among European Union member choked off the flow of foreign labourers.

“At this point, it concerns vegetable growers who need manpower, both indoors and outdoors, in terms of sowing and doing spring work,” Stojan Marinkovic, president of the Republika Srpska Farmers’ Association, told RFE/RL’s Balkan Service. “We are aware that this is a large group of people working in one place, so they have to take care of protecting both themselves and the people around them.”

Sooner or later, however, coronavirus infections will fall, governments will ease restrictions on travel and retailers, and supply chains will revert to normal, experts predict.

At that point, people may face a different problem: what to do with all the extra goods in their larders, cupboards, and freezers.

“If people are buying more goods now, it is not necessarily because they are using more — they are stockpiling. When things get back to normal, consumers will have a lot of canned soup and toilet paper at home and won’t need to buy more,” Goker Aydin, an operations management expert at the Carey Business School at Johns Hopkins University, said.–RFE/RL