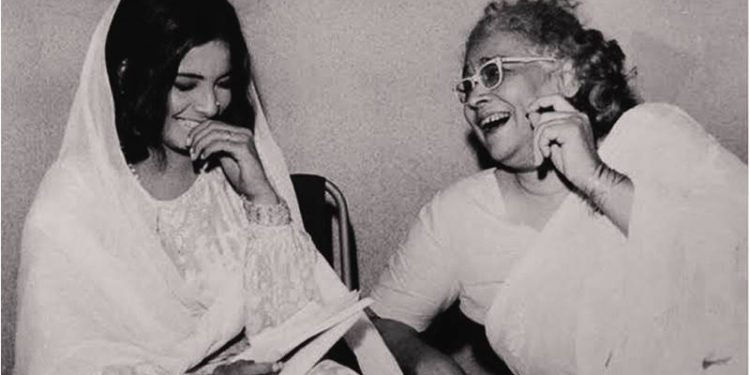 These months not only bring a hint of winter in the air, but also a remembrance of two iconoclast Urdu writers whose writings will surely make the temperatures of the soul rise: for they act against the harsh cold of society. Ismat Chughtai and Sahir Ludhianvi both unmasked the hypocrisy of society and became the voice of the voiceless.

While Ismat Aapa’s writings explore female sexuality and the toxicity of the male ego, among a host of other issues, Sahir’s poetry flows like a cascade, and yet it denudes the underlying rocks by the sheer impact of its flow.

Ismat Aapa’s Lihaaf indeed became a watershed moment in her life. It spoke of the desires of a woman, who, even if she today barely opens her mouth when it comes to sexuality. Here I am not talking of the women in metropolitan cities who descend on streets in protest when their voices are muffled. Even among those women, some would not even dare to speak about their sexuality for it is much easier to fight the enemy outside in the form of regressive governments but not quite as easy to confront the conflict of the flesh and mind.

“Well personally I don’t believe in such labeling of Ismat or any other writer. I believe Ismat can stand up on her own strong shoulders without being compared to any other writer. I think she would have wanted that as well! Also, as you will know, she is the only female writer among the predominantly male quartet of the pillars of Urdu fiction in the 20th century (Manto, Krishan Chander and Bedi). However, I believe in this age of marketing when many of our youth are rapidly slinking away from Urdu literature and relying on translations, some sort of labeling may be necessary since it is a given that some writers (like Manto) will be more recognized than others, unfortunately! And let’s not forget: isn’t it ironical that it was Ismat who labelled another fellow  – albeit comparably junior – female writer Quratulain Hyder as ‘Pom-Pom Darling’ and was in turn called ‘Lady Changez Khan’ by the latter!” says Raza.

But even though they raised similar issues, both had their own distinct style. Gori Bi of Ghunghat spends her entire life as a married virgin just because her husband, who was marred by a deep sense of inferiority, doesn’t lift her bridal veil on the wedding night and deserts her. Ismat’s essays like Aurat also changed the definition of feminism.

Ismat’s essays like Aurat changed the definition of feminism

Raza further notes, “I came to her essay Aurat very accidentally. Call me lazy, but I felt it summarized her philosophy of feminism very succinctly; that is why I immediately translated it into English and have had the pleasure of dramatizing it several times here in Pakistan, including at a TEDx talk. It never fails to raise eyebrows among both men and women, both for its provocative stance in the first part, and prescriptive stance, in the second part. In fact just last week, after dramatizing this essay for God-knows-how-many-a-time on Ismat’s 28th death anniversary (October 24), one of the young organizers came up to me afterward and confessed that after hearing this essay, he will seek out Ismat Chughtai’s work. 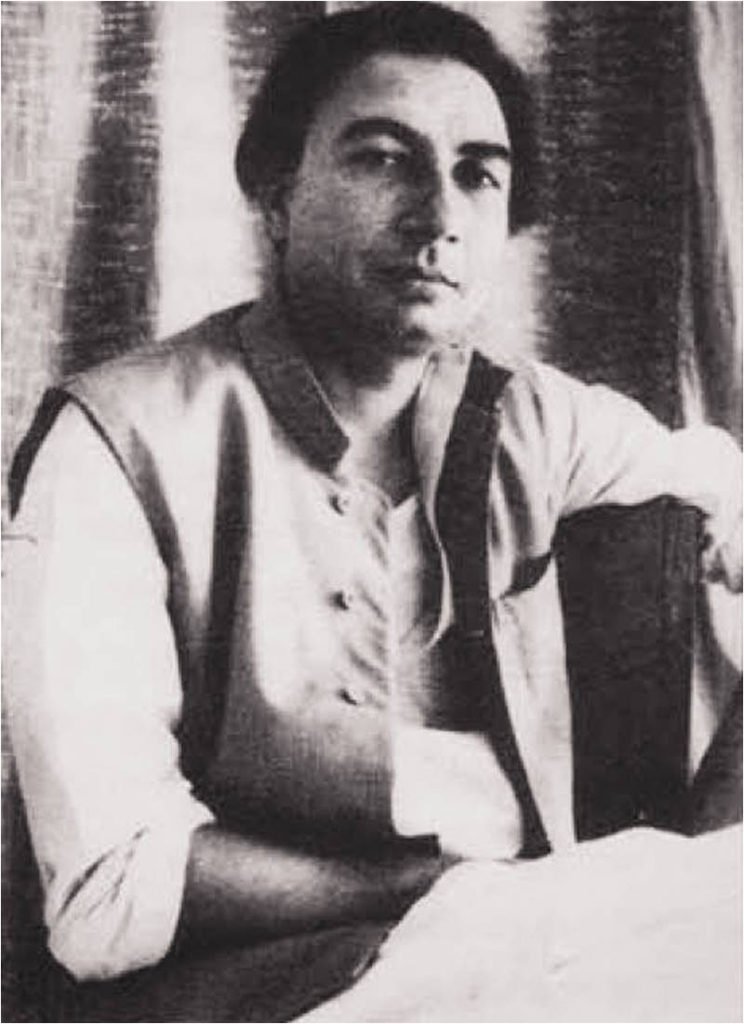 So I feel that even for those who are new to Ismat’s voluminous work, this essay can serve as a good starting point for the rest of her work. But this is not the only essay she wrote. There are other essays like Heroine, which lay bare the changing role of the heroine in Urdu literature from its relatively patriarchal origins to its recent feminist avatar (I have referred to both essays in my latest piece on her). Her essay on Fasaadaat Aur Adab (Partition Riots and Literature) is also perceptive for its time, taking many Progressive writers like Manto and Khwaja Ahmad Abbas to task for giving in to the better part of their immediate emotions post-1947 and not really focusing on the task at hand. So I feel first that compared to her stories and novels, her essays have been focused on less by both her critics and translators; and secondly I believe her essays articulate her point of view more effectively than many of her short stories. Ismat wrote a few essays, but at least Aurat could be held up any day as a perfect example of the distillation of her philosophy! It is also a fine example of how one can use both satire and seriousness in propagating a message effectively.”

Now if one shifts to Sahir as a poet, Vijay of Pyasa appears to me as the real-life Sahir. He was a poet that didn’t confine his poetry to the zulf and ada of the beloved but revealed the grim and gory face of the society. Sahir’s poetry is hard-hitting, but probably because of its lyricism. It soothes yet disturbs the soul at the same time. Sahir has been credited with recasting class-based rebellion as romantic rebellion in film songs to shoehorn his politics into the filmi idiom.

“He became arguably the most successful poet of the progressive tradition, writing extensively for movies (Majrooh comes a distant second after him in this category) He has been very skillful in making space for progressive political inclination in film songs. However, it must be said that Sahir has strangely been ignored by the intelligentsia. Perhaps this is because like Faiz he is neither a poet of the intelligent class nor a poet of the workers’ assemblies like many of his peers; but he appeals more to the nominally-educated middle-class youth,” opines Raza.

Sahir’s repertoire consists of his film poems and songs as well as his non-film poetry. It’s difficult to say that which was better but what’s important to note is that Sahir never let go off his distinct style which was the pain of the underdog of the society. The lines that often resonate within me are from Guru Dutt’s Pyasa.

Raza says, “I love his ode to the Taj Mahal, which though is one of his earliest poems betraying a raw consciousness about a cultural asset has an undeniable individualistic reaction; then there is his qataa which exemplifies his defiance as a poet:

His film poem Main pal do pal ka shayar hoon from the blockbuster 1976 film Kabhie Kabhie is an intrinsic part of my childhood growing up in the late 1970s and somehow informs my own image of Sahir. I also like his poem written on the murder of Congolese patriotic leader Patrice Lumumba Khoon phir khoon hai, his poem Ye mahlon ye takhton ye tajon ki duniya and his anti-war poem Parchhaiyan, which in my humble opinion is the best poem written on the topic in Urdu. I continue to love his poems because whether it is his early poems or his later work, it is marked by a poetic lyricism, sweetness and spontaneity which never left him; even in poems which did not bear very deep experiences or consciousness. His style is smooth, without any waywardness and artificiality. He has a skill of presenting the experiences that are available to him. His film songs are on one hand, full of lyricism and on the other reflective of new situations and issues.”

His nazm Ai Sharif Insaano remains my favorite anti-war poem. In a nutshell Sahir exposed the futility of war in the lines,

Before I conclude the conversation with Raza, I ask him to comment on the relevance of Ismat in today’s times. He replies: “When Ismat started writing in colonial India in the 1940s, she was the first to write about lesbian and feminist themes, even before the word ‘feminism’ was invented some 20 years later in the West, by the likes of Simone de Beauvoir, Germaine Greer and Betty Friedan. And now in the 20th century in the times of #MeToo, Ismat is more relevant than ever. Here’s what I have argued in my latest essay on Ismat (published in The Friday Times last week):

She invented nothing less than a new language for the Sairas and Mairas of our own time, more clearly articulated than any other of her numerous writings, in a little-known essay ‘Aurat: Aadhi Aurat, Aadha Khvaab’ (Woman: Half Woman, Half Dream), her everlasting testament:

‘If a woman shows her womanhood at the right opportunity, it befits her. But what is this that she goes on gathering the basket of femininity in colleges, offices and departments.

When we know that women will indeed have to work with men tomorrow, if not today, we will have to construct new aphorisms, forgetting the present ones:

But even though I have been smitten by Sahir’s poetry, I always felt that he could have done justice to his real-life love in Amrita Pritam. Due to his commitment-phobic nature, he deserted her.

Raza, however, doesn’t agree. “I would tend to disagree with this assessment. Firstly, Sahir was a commitment-phobe all his life because his father disowned his mother early in his life; he truly hated the only person in his life, which was his father and truly loved only one woman which was his mother. So the travails of his mother made him a feminist before he had even put pen to paper! Perhaps this was why he had a distrust of relationships; this happened in not only with his relationship with Amrita Pritam, but subsequently with the singer Sudha Malhotra and the writer Hajra Masroor. Secondly, every great personality is a sum of contradictions. Even the great Allama Muhammad Iqbal had contradictions, so were Mirza Ghalib and Josh Malihabadi! And so, Sahir too is not absolved of this; but let’s learn to accept poets and writers in their entirety rather than denounce them with labels. These contradictions do not take away from their greatness.”

Well, whether Ismat or Sahir, it’s true that like all humans they were made of contradictions. But let’s leave it at what Raza says: that it doesn’t take away from their greatness. Ismat is as relevant today as she was then and so is Sahir. Their works will continue to make one reflect on the extremities of the world around them. This feature was first published in The Friday Times.

Saira Mujtaba is a Lucknow-based translator, writer, and broadcaster. Raza Naeem is a Lahore-based social scientist, book critic, award-winning translator and dramatic reader. He is also the President of the Progressive Writers Association. He can be reached at: [email protected]