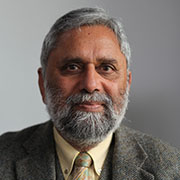 For the first time in the history of global capitalism, the shift is taking place from relatively less populated economies to regions of the world with huge populations amid the massive phenomenon of global climate change.

In the light of the above discussion, a lecture will be delivered by Prof. Dr Pritam Singh, Oxford School of Global and Area Studies, University of Oxford presenting an outline of the transitional path to eco-socialism as part of the Distinguished Speaker at the Sustainable Development Policy Institute (SDPI) at its seminar hall 4th floor Taimoor Chambers, Fazle Haque Road Blue Area on Thursday (April 18) at 3pm. Shafqat Munir, Director, policy, SDPI, will moderate the lecture

He did his MPhil from Jawaharlal Nehru University, Delhi with distinction. Before coming to Oxford, he has taught at University of Delhi as a lecturer in economics and at Punjab University, Chandigarh, as a Reader in Economics.

In 2007, he was elected as a Research Associate at the Department of International Development, Queen Elizabeth House, University of Oxford, and in 2009, he was a visiting professor at Jawaharlal Nehru University, Delhi, in 2013 at Lomonosov Moscow State University, and in 2018 at University of Uberlandia, Brazil.

He has taught at Oxford Brookes University for thirty years and was awarded the distinguished Professor Emeritus status by the University in 2018.

His work is currently focussed on two main areas: the sustainability implications of the spatial shift taking place in global capitalism; and the Indian capitalism with emphasis on decentralisation and human rights and with special reference to Punjab.

His two recent books “Federalism, Nationalism and Development: India and the Punjab Economy and Economy, Culture and Human Rights: Turbulence in Punjab, India and Beyond have received critical acclaim as path breaking works of scholarship.

Both the books are being translated in other languages. His book Federalism, Nationalism and Development: India and the Punjab Economy brings together methodological approaches and field level data to add new dimensions to the understanding of federal modes of governance and the development process, particularly in India.

“The book is one of those rare academic publications which have the potential to make history,” commented the late Professor Ajit Singh of Cambridge University in his review of the book in Economic and Political Weekly.

His Economy, Culture and Human Rights: Turbulence in Punjab, India and Beyond marshals diverse theory and evidence drawn from economics, political science, moral philosophy, and history to make a case for understanding human rights as intrinsically important rather than simply as a means to achieve a given set of economic and political goals.

The book was the subject of over half an hour  TV interview with Pritam on Sky/Sikh Channel.

His edited books Punjabi Identity in a Global Context (with S Thandi) and Equal Opportunities in the Curriculum (with M Pearl) were pioneering works in their respective fields.

He has developed new modules in these fields both at UG and PG levels.

Pritam takes keen interest in pedagogic theory and practice. In particular, he has explored the dimensions of equal opportunities in teaching concerning curriculum, teaching methodologies and assessment of student performance.

He was invited to give the keynote address at an international conference on Teaching Methodologies in India and Abroad at Baba Farid University, Bathinda, Punjab in India in January 2010 where he spoke on ‘Teaching methodologies: some lessons from the comparative experience of teaching in India and the UK’.