Politicians, media workers, students, and civil society activists have expressed solidarity with Dawn, the oldest and largest circulated independent newspaper of Pakistan, against hooliganism and besieging of its offices by a group of unknown people in Islamabad and Karachi.

They expressed concern at the inability of the government to take action against the hooligans which is part of efforts to suppress freedom of expression and freedom of the media.

They also demanded an investigation into the incident and unmasking those who are responsible and behind the hooliganism and besieging of the newspaper offices at Islamabad for three hours.

A large number of journalists, media workers, political leaders and student activists assembled outside the offices of the newspaper across the country to show solidarity with the staff in the wake of an episode earlier this week in which a mob besieged the newspaper’s Islamabad bureau.

The unidentified men were protesting the publication of a report in Dawn which described the man who stabbed two people to death in London last week as of Pakistan descent.

In Karachi, a demonstration was held outside Dawn’s offices as part of the show of solidarity with its management and staffers.

Addressing the gathering, Zaffar Abbas, the Editor, said media organisations were coming under attack one after the other. Civil society needs unity to discourage this ominous trend, he observed.

“We, the editors as well as the owners, must try to understand that if an unfortunate incident can befall one, it can befall others too. That’s why we all need to stand together.”

Abbas said that the circulation of Dawn was also being stopped in certain cities once more.

He asked of the authorities: “What is our fault? That we are publishing news reports? If we have violated any laws, if we have committed treason, there are laws for that. File a case against us, drag us into court, jail us, but what is this? You don’t like the newspaper, you don’t like the news it publishes, so you gather government employees and stage a protest against it?”

“Democracy will never be able to take flight in the country this way. If democracy has to flourish then freedom of expression and freedom of the press will have to be valued.

“If you do not value these, you will have to bear the brunt of the resulting loss,” Mr Abbas said.

During the protest in Islamabad, former Senator Farhatullah Babar of the PPP said the siege of Dawn’s offices in the federal capital seemed to be part of a concerted campaign under which distribution of certain newspapers was disrupted across the country and then media houses were pressured to sack some journalists.

“Now mobs are being sent to harass the media. First, a federal minister tweeted against Dawn and within 24 hours, a mob laid siege to its offices. Curiously, the mob was chanting slogans in favour of an intelligence agency. This raises questions.

“The defence ministry should release a statement to dissociate the intelligence agency from the incident,” the senator said.

He described the current rulers as puppets as according to him ‘aliens” are running the affairs of the state. The current rulers are like puppet drivers sitting on the driving seat of a vehicle but the control of its steering, clutches, and the break is in the hands of those who are sitting on back seats. This will lead us to a disaster, he warned. 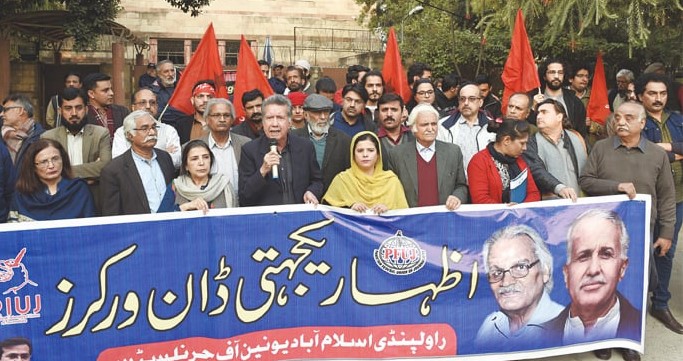 Former Senator Afrasiab Khattak addressing the gathering of journalists, political leaders, and student and civil society activists who had gathered outside Dawn offices in Islamabad on Thursday to express solidarity with the newspaper staffers and to condemn besieging of the building by hooligans.

Afrasiab Khattak, a former senator, described the situation as no different from martial law but added that the resort to hooliganism was a new threat. He said it was unfortunate that political parties were silent at a time when hidden forces were trying to take the law into their own hands.

“I fear that political parties will face the same situation one day if we don’t nip the evil in the bud. Lawlessness yields to chaos,” Mr Khattak warned.

Mohsin Dawar, an independent member of the National Assembly from tribal districts of Khyber Pakhtun­khwa, visited Dawn’s offices in Islamabad to show solidarity with the staff.

A former MPA of the National Party, Yasmeen Lehri, said the first step to suppression of democracy was to silence all voices of dissent.

Ismat Shahjehan of the Awami Workers Party in her speech termed it a creeping coup that manifests itself in one way or the other. The establishment wants to impose certain convoluted state narrative on society while critical thinkers, intelligentsia, academia, progressive political forces, students and independent media like Dawn who do not subscribe to and deconstruct the state narrative face intimidation and harassment.

She called for unity of the progressive, democratic and secular forces, as well as media and professional bodies to fight the onslaught of fascist and undemocratic forces and for the establishment of peoples’ democracy and civilian supremacy in the country.

She said the AWP, Women Democratic Front and Progressive Students Federation will be at the forefront of such struggle.

Nasir Zaidi, the PFUJ’s newly elected general secretary, warned to launch a movement for freedom of expression and freedom of the Press.

“Dawn has been facing problems as it tries to create a link between the state and the masses. This is not acceptable to the decision-makers,” he said.

M. Ziauddin, a veteran journalist, and a former Resident Editor at Dawn, Islamabad, said if any individual or organisation has any complaint about a news report they should approach the Readers Editor at the Dawns’ Karachi offices. Besieging newspaper offices and hurling threats to its workers is unacceptable and should be condemned and resisted.

In Lahore, Quetta and Peshawar journalists and activists gathered outside Dawn offices to express solidarity with the staffers of the newspaper.

According to a Dawn report, a mob on Monday had staged a demonstration against the publication of a news report regarding the origins of the London Bridge attacker who stabbed two persons to death last week. The charged mob, carrying banners and chanting slogans against the newspaper, had remained outside the office building for nearly three hours, besieging the premises and making the staffers hostage.

On Tuesday, dozens of people had also staged a protest demonstration outside Karachi Press Club against Dawn. The participants had threatened to besiege the offices of the media group if “prompt action was not taken against the management and outlets of the organisation for publishing false news,” the report said.

this triggered a strong reaction from international media and human rights bodies.

The International Press Institute (IPI) — a global network of journalists, editors and media executives — and the Committee to Protect Journalists (CPJ) also expressed concern over the state of press freedom in the

According to the RSF, the entrance to the building that houses the newspaper and its sister TV channel, DawnNews TV, was occupied by the demonstrators who prevented anyone from entering or exiting the premises, threatened any employees who tried to enter and demanded written apologies for the newspaper’s purported offence. The simple, widely verified piece of information was regretted by the protesters as an insult to Pakistan and a ground for demanding that the newspaper be banned outright. After more than three hours, and long negotiations, the newspaper’s administration managed to get the crowd to disperse, but not without being threatened and warned.

Meanwhile, the Human Rights Commission of Pakistan said: “The intimidation and harassment that Dawn continues to face is unacceptable.”

Meanwhile, the AWP in a post on social media also condemned the act and expressed solidarity with Dawn. “AWP stands in complete solidarity with Dawn and its media workers who are continuously getting harassed and threatened with serious consequences in light of the recent report that was released about the creation of Twitter trends for narrow political agendas.

AWP leader Ammar Rashid in a statement said the party condemns these attacks on journalists and supports the demand for freedom of the press.