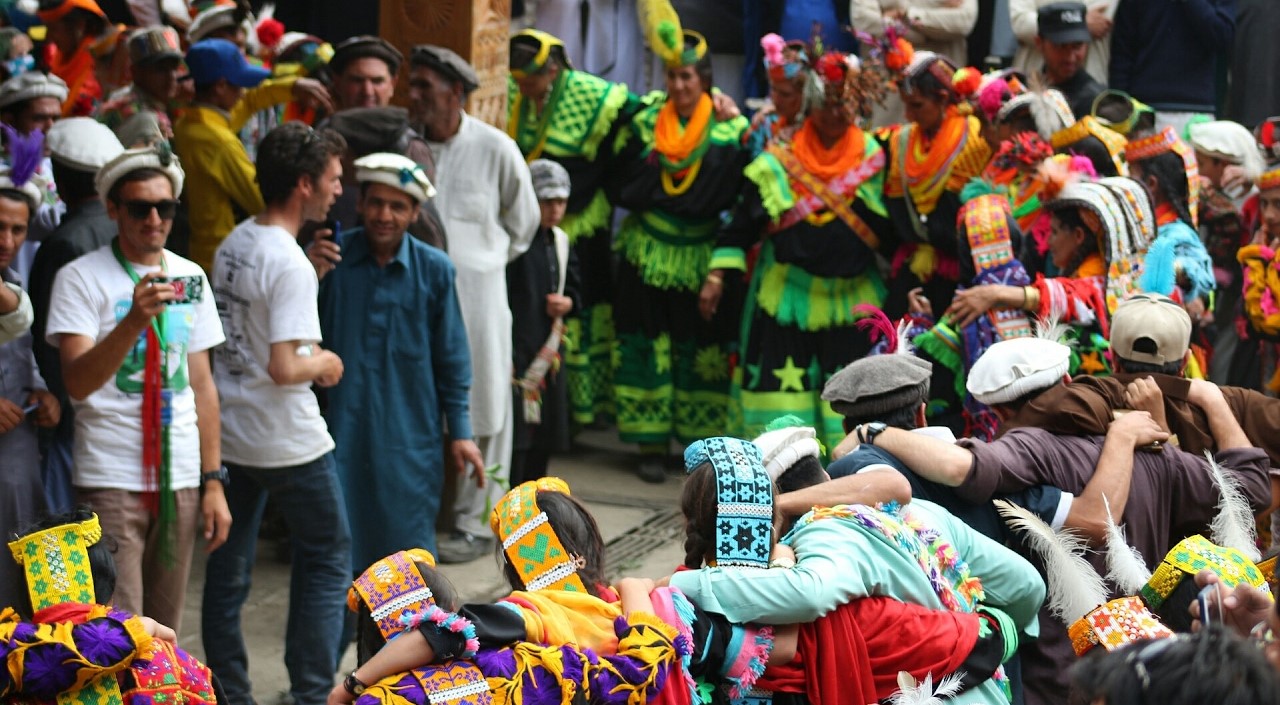 Over 4,000 Kalashas, belonging to an ancient pagan tribe are living in three valleys in the Hindu Kush mountains

Kalasha, an ancient ethnic pagan tribe living in high mountains of Hindu Kush for centuries, is striving to preserve its unique but endangered intangible cultural heritages from extremism, external intrusion, and coercion.

They live a commune life and celebrate various festivals throughout the year. But there are three festivals — Chilim Joshi is celebrated in the spring season, Uchao festival in autumn and Choimos festival in mid-winter — which have a significant role in their life.

Their history is shrouded in mystery is believed to be 2,000 years old. They claim to be the descendants of Alexander the Great’s armies which invaded this region in the fourth century BC. According to researchers quoted in New York Times, “the Kalash people’s DNA seems to indicate that they had an infusion of European blood during a “mixing event” at roughly the time of Alexander’s conquests. These isolated people are thus most likely the direct descendants of the ancient Greek-Macedonian armies who set up outposts in this region 2,300 years ago.”

The tiny religious minority comprised of over 4,500 people now confined to Bumburet, Rumbur and Birir valleys, has survived persecutions in the recent past. They are still under the immense pressure of modernization and conversions. As a result, the Kalash population has decreased alarmingly.

However, Kalasha activists narrate other factors for the decrease in their population.

“The basic factor behind the decrease in population is education. The Kalashas are not being taught about their own distinct culture and beliefs,” says Syed Gul Kalash, an archaeologist, and activist from the valley.

Young Kalashas, according to Ms Gul, are ignorant about their history. “There are many other factors behind the threat to the endangered tribe.

“Our culture is facing many threats, both internal and external,” commented Luke Rahmat, another activist, and journalist from the community. He said the major threats our community is facing are: the hegemony of dominant cultures, the media onslaught, economic deprivation, the influx of tourists in the secluded valley and interference in their cultural life.

The majority of Pakistanis are ignorant about the history, culture, and beliefs of the Kalashas. They refer to the Kalash valley as Kafiristan (land of infidels).

“We are not non-believers since we believe in a creator, so why we are called infidels? We should be called the Kalashas. We are Pakistanis. The exclusion of our language and religion from the list of religions in the census is unjust,” says Ms Gul.

The lopsided state policy on textbooks also adds to their woes. The textbooks taught at Kalash schools are devoid of material about the community’s history, belief system and culture. Rather, the students are compelled to study textbooks meant for Muslims.

“Our children are taught Islamiat which creates confusion in their minds about their own faith and culture”, regrets Rahmat.

“When a Kalasha child is exposed to the doctrines of other religions they start perceiving their own belief as incorrect,” he says. Kalasha girls when merry boys of other communities, they abandon their religion, Rahmat notes.

For the preservation of the endangered cultural heritage of the world from extinction, Rahmat suggests cultural mapping of Kalash valley, developing and teaching the curriculum in Kalasha language to the children to create awareness among the younger generation about the importance of their intangible cultural heritage.

The impact of the influx of tourists in the valley is another factor hampering their peaceful life and performance of rituals. According to Mr Rahmat, tourism has its own merits and demerits. The majority of the photo-snapping tourists encroach the sites where religious rituals are performed and disturb them. Some of them take photographs of young women without their consent as if they are taken for granted, he regrets.

Locals say an influx of mostly male, camera-wielding visitors are threatening their unique traditions. The remoteness of these valleys once guaranteed their isolation. But last year 17,000 tourists mostly locals flocked to the valley.

“Dance and music are an integral part of our culture and life, that make us happy, and we enjoy it a lot with our friends, sisters, and brothers, says Mussarat Ali, a student.

“But we don’t like these people take our pictures. That’s why most of the girls abstain from rituals and festivals, they wear a veil and cover their heads with scarves to save themselves from being photographed, she says.

The Kalashas are very peaceful and progressive people. They worship many gods and are allowed to drink alcohol. Young women can choose their life partners on their own free will.

The stories like Kalasha women can sleep with anyone is nonsense and bullshit, he says.

We have installed a billboard at the entrance of the valley inscribed with instructions and guidelines for the visitors including “Do not photograph women without their consent; do not harass women in any way and do not disturb locals while they are working in fields,” he shared.

“What I am a bit concerned about is that in the future years, if the tourism grows, the culture will get affected,” says Martin Rosenbaum a German tourist.

A local hotelier says the Kalash hospitality has its limits and should not be crossed or taken for granted.

“If they don’t respect us. We don’t need that kind of tourist. If they violate our culture, religion and our tradition, we don’t want these kinds of tourists,” commented Yasir Kalash, a hotelier. They [tourists] are most welcome if they respect our culture and tradition.

According to Ms Gul, the local tourist come with two major misconceptions in their minds. The abundance of liquor and free mingling of women. She says grape-wine has a religious significance, “we brew it for religious ceremonies, not to drink and go mad”.

The Kalasha women, are perhaps, the lucky ones who have the liberty to choose life partner but they don’t inherit their share of land, Ms Gul says.

She blamed media for portraying only the dance and tourist sites of the valley rather than highlighting the issues like forced conversions, illegal encroachment of land by outsiders and violation of basic human rights.