Kashmir is a paradise that has been burning for decades. Dal, a lake in Srinigar that once attracted tourists from all over the world because of its beauty and calm waters, does so no more. Inside its waters is the blood of hundreds of thousands of Kashmiri civilians and slain members of the armed forces of India.

India and Pakistan have been fighting a proxy war that has wasted the lives of generations of Kashmiris. Young Kashmiris who ideally should be holding degrees in computer or medical sciences in their hands instead lift guns and chant for their rights. Their fundamental human rights have been usurped, and the world seems uninterested in paying heed to their problems as it thinks that it is just a regional conflict between Pakistan and India. However, for the generations of Kashmiris, this regional conflict has brought misery and cast a shadow of death over the entire Kashmir Valley. Conservatives in both India and Pakistan claim their right to Kashmir, and to justify their claims have created an atmosphere where there is no hope for peace for the suffering Kashmiris.

Pakistan on its part is accused of provoking the people of Jammu and Kashmir state to fight for secession from India, while India is accused of using state oppression to kill the insurgency. The Kashmir conflict actually is as old as the formation of both countries, but the insurgency started during the late 1980s, and in the 1990s, we saw the deadliest bloodshed when Pakistan penetrated J&K through its jihadist organizations to launch an armed struggle for independence from India. It was a time when every nook and corner of Pakistan was filled with literature and posters inviting youths to wage jihad in J&K.

The likes of Hafiz Saeed and Masood Azhar were considered strategic assets and through them, Pakistan penetrated into Indian Kashmir by capitalizing on the frustration of Kashmiri youth against New Delhi. It was actually a response to Indian strategy of creating the Mukti Bahini guerrilla organization and liberating East Pakistan from West Pakistan, creating independent Bangladesh. 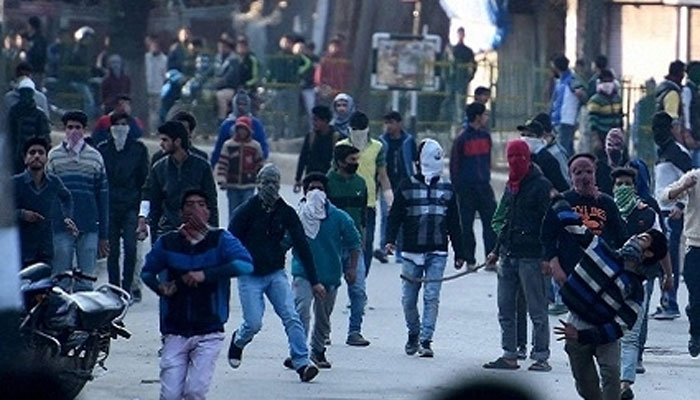 Indian-held Kashmir ProtestHowever, after the attacks on the US of September 11, 2001, the focus shifted toward Afghanistan, and non-state actors in South Asia were left to act on their own. At the same time, the failure of New Delhi to understand the nature of the problem of Kashmir and its unsuccessful bid to resolve the issue through the use of force created more frustration and anger. While unsuccessful in solving the problems in Kashmir through political and administrative means, India waged a proxy battle in Balochistan, where it helped the separatist movement against Pakistan. So both Kashmir and Balochistan became full-scale proxy battlegrounds, and both India and Pakistan used the resentment of the population of those two areas to their own advantage.

The shedding of blood wherever it takes place is unacceptable, and terrorist attacks wherever they are carried out are not acceptable. The Pulwama attack that took the lives of 42 officers of India’s Central Reserve Police Force (CRPF) was an incident on which no human soul can rejoice. However, the fact that the government of Indian Prime Minister Narendra Modi is using it as a political card to exploit Hindu nationalism in the election campaign is also an act that should be condemned.

In fact, this kind of thing has been perpetrated on both sides of the border. The ruling elites of both countries play with the sentiments of the masses in the name of nationalism and religion and raise the Kashmir issue for the sake of scoring political points. The world is watching both countries wasting their resources on defense expenditures instead of human development, and indeed, some foreign countries are profiting from the purchase of arms by both Islamabad and New Delhi. Perhaps no one pays attention to nations that are keen to walk on the self-destructive path, especially when there is profit to be made.

For New Delhi, the concern is that the youth of J&K are gradually becoming alienated, and evidence for this is the involvement of the Kashmiri boy Adil Dar in the suicide attack on the CRPF officers at Pulwama. It’s time that New Delhi looked into its own faults and human-rights violations committed in Kashmir, as by firing on protesters or humiliating Kashmiri youth at the hands of Indian security forces will only result in further alienation. It is time for New Delhi to move beyond optics and make some serious efforts to control the damage it has done in Kashmir.

As for Islamabad, it is high time it revisited its policies and eliminated extremist outfits like Jesh-e-Mohammed from its soil, so it can restore some credibility among the global diplomatic community. At the moment Islamabad stands alone, as soon after the Pulwama attack when India leveled charges against Islamabad of allowing extremist outfits to carry out operations like the one in Pulwama, the whole the world including the US stood with New Delhi. The policy of creating a narrative based on jihad has not only damaged the credibility of Islamabad but it has also given birth to extremism in the country.

It seems that both Pakistan and India in order to maintain the status quo in Kashmir actually are destroying the future of their youth in the name of jihad on the one hand and Hindu nationalism on the other. For Kashmiris, there is no relief, as on the one hand they are faced with the fear of being marginalized by the Hindu nationalists while on the other hand, the jihadist organizations and militant outfits are exploiting their sense of deprivation and using them in a war that has no end. Amid this never-ending proxy battle and hatred the lives and future of Kashmiris have been destroyed.

A once-peaceful ethnic community who used to sing songs and enjoy the charms of life has become collateral damage of the blind hatred between India and Pakistan, and so have the security personnel of both countries whose lives are wasted to settle scores with each other. As long as the ruling elites of both countries are enjoying political and military benefits and global players are selling their weapons to both sides, who actually desires peace to prevail, and who wants to see the beautiful lake of Dal again surrounded by the songs of the locals and the laughter of the tourists from around the globe?

Imad Zafar is a columnist/commentator for newspapers. He is associated with TV channels, radio, newspapers, news agencies, and political, policy and media related think-tanks.