Lawyers of Gilgit-Baltistan held a protest rally outside Chief Court Gilgit on Friday against the arrest of a senior lawyer and socialist leader Ehsan Ali. They chanted slogans against the police officers and district administration for instituting FIRs against their leader on trumped-up charges and subsequently putting him behind bars.
They marched from the city to the chief court carrying banners inscribed with slogans demanding the release of their leader. The call for protest was given by Supreme Appellate Court Bar association, Chief Court Bar Association and District Bar Association Gilgit and Young Lawyers Forum. They marched from the barrooms up to the chief court and chanted slogans against the police, security agencies and the administration for framing the baseless charges against the senior lawyer.
A large number of lawyers, civil society and political activists also joined the lawyers. They termed it a conspiracy to disturb the peace and harmony of the region. 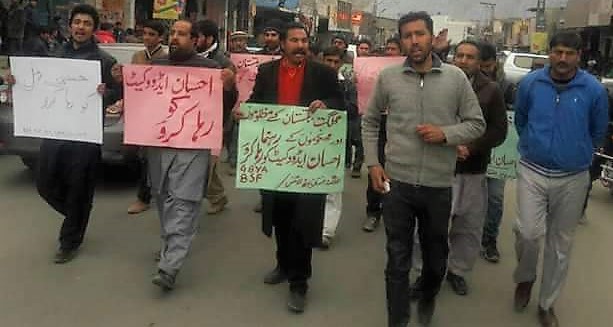 ation President Salimuddin and Young Lawyers Forum President Rashid Umer addressed the protesters and criticised the police.
They said that Ehsan advocate has been implicated in a fake case to silence him from speaking for the downtrodden and oppressed people of Gilgit-Baltistan lamented that protests have held in various countries and cities of Pakistan but the lawyers in Gilgit have not yet held a strong protest. Some elements within the ranks of lawyers are trying to sabotage the unity of the lawyers and creating hurdles in expressing anger against the government.
They said that the bureaucracy and the state institutions are employing the old dirty tactics of ‘divide and rule’ by creating sectarian disharmony in the region. “It’s not a new thing whenever the people of GB have raised their voice for fundamental rights, they had been divided on sectarian and ethnic lines to continue the oppressive and exploitative rule of the ruling elite in the region.”
They criticised the police for conducting a raid on the house of the lawyer at midnight harassing his family members and violating fundamental rights and cultural norms. Ehsan has not committed any crime; his only crime is to raise his voice against injustices, and colonial set up and to defend the working class and the progressive political activists in courts,” they said. 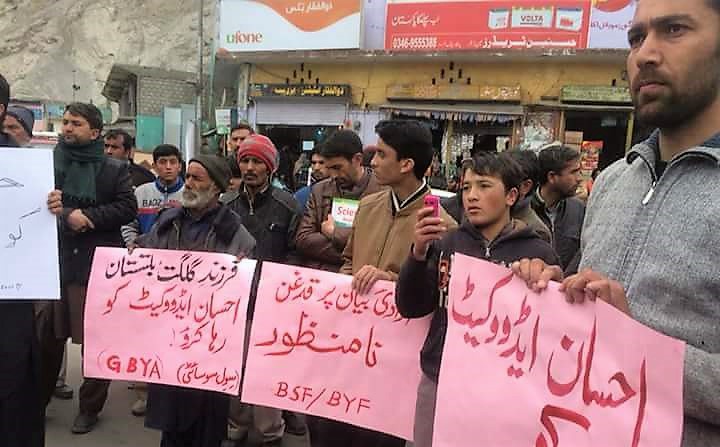 They warned the state institutions, the regional government and district administration of to release Ehsan and stop intimidating progressive and social activists, otherwise, all the lawyers in GB, other cities of Pakistan and Azad Kashmir will give a call for launching a protest movement. They vowed to fight Ehsan’s case in courts and on streets.
Meanwhile, lawyers at Gahkuch, headquarter of Ghizer District, boycotted courts in protest against their leader’s arrest and held a protest rally in the district courts.
They demanded the release of Ehsan advocate and withdrawal of the FIRs filed on trumped-up charges. The lawyers termed the move a bid to destroy the peace and sectarian harmony of GB.
Ehsan Ali Advocate, President Supreme Appellate Court Bar Association (SACBA) was arrested at around 2am on Sunday by the Gilgit Police under blasphemy charges and presented before an anti-terrorism court. The ATC sent him to jail on 14 days judicial remand.
On Thursday Jahangir Shah, Ehsan’s lawyer filed an application in the ATC for his bail. The court has fixed Monday for hearing of the bail plea, Jahangir told High Asia Herald by phone.
He said that lawyers in Islamabad have also threatened to hold protest rally if Ehsan advocate was not released by Monday.
Earlier on Tuesday, Baltistan Youth Federation (BYF) and Baltistan Students Federation (BSF) jointly organised a protest march at Skardu and condemned the police action. They demanded the release of Ehsan and withdrawal of fake charges against him.
The Socialist International also held a protest rally outside Karachi Press Club on Tuesday. Protests were also held at Chilas, headquarter of Diamer District for the release of the senior lawyer.

The Awami Workers Party (AWP) has given a call for countrywide protests for February 18 to express solidarity with Ehsan Advocate and to press for his release. The AWP federal general secretary Akhtar Hussain Advocate has asked all national chapters and progressive forces to organise protest rallies in their respective cities, outside press clubs.
Protests will be held outside press clubs in Karachi, Lahore, Islamabad and Peshawar for the release of Ehsan Ali.
Meanwhile, the GB Youth Alliance, a conglomerate of different progressive and nationalist youth organisation based in Karachi has also given a call for protest on Sunday.