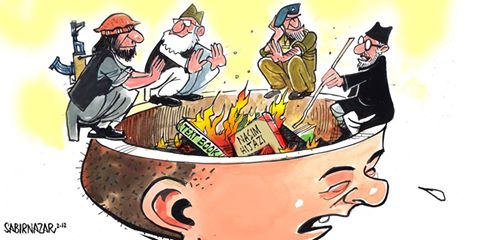 Writing textbooks for students who are in a formative stage is serious business. Errors and omissions on part of the writers due to lethargy, ignorance or self-complacency are pardonable and can be corrected.

However, when textbooks are written with the express aim of misguiding the pupils and indoctrinating adherence to status quo, support for the regime in power, glorification of war, self-righteousness, hatred for other [non-Muslim] religious and ethnic groups, it becomes a criminal act where an entire generation is spoiled at the altar of vested interests of the powerful few.

Not only that, but the ability to ask questions, which lies at the core of the learning process is throttled by discouraging students from challenging dogma and conventional views. This strain of malicious intent is particularly visible in social sciences where disinformation is deliberately disseminated.

“When textbooks are written with the express aim of misguiding the pupils and indoctrinating adherence to status quo, support for the regime in power, glorification of war, hatred for other religious and ethnic groups, it becomes a criminal act.”

The entire process of writing textbooks is closely monitored by the State, where government employees write textbooks which are required to be approved by the education ministry. Later, these are published by the textbook boards, which again are part of the State. Hence, there is no room for any “deviation” from the “official narrative”.

During military dictator Ziaul Haq’s 11-year of infamy, the name of former Prime Minister Zulfikar Ali Bhutto was omitted from the textbooks while the same texts were all praise for Zia, extolling him as a pious man, chosen by God, who made Pakistan “the fortress of Islam”.

No textbooks condemn military rule, rather there is a criticism of the democratic system and the political leadership. Nothing is contained in the text, which garners civic virtue and education in the democracy. And there is substantial material on the conduct of wars with India vis-a-vis more relevant content focusing on the constitution, issues of governance, political economy, society and culture.

Hence, violence and wars as means to resolve international issues are applauded, the significance of national security and the pivotal role of the armed forces are imparted and the idea that “they are the sole saviours” is stuffed in the minds of the pupils.

“No textbooks condemn military rule, rather there is a criticism of the democratic system and the political leadership”

Wars of 1965 and 71 are presented as victories whereas they were actually lost. Hatred for Hindus, their culture and religion are presented with slanted descriptions. India and the Congress are made synonymous with Hinduism, whereas it is mentioned nowhere that a sizable number of Muslims are Indian citizens and seven presidents of the Indian National Congress were Muslims. Facts are also twisted when the Indian revolt becomes the war of independence rather jihad undertaken by the Muslims alone. However, no mention is made of the Indian Muslims who fought against the Turk Muslims during the First World War.

The role of Aligarh is overemphasized in everything progressive benefiting the Indian Muslims while UP’s culture is called the birthplace of Pakistani culture. It is however interesting to note that if Pakistani culture is a baby of the UP culture why is the local culture of areas forming Pakistan, looked down upon by those migrating from UP? What was the role of former East Pakistanis in seeking independence for Pakistan and did they not have a rich and vibrant culture? The textbooks are silent on these issues.

“At the university level, teachers who try to impart knowledge and invoke independent reasoning are disliked by most of the students while those who tell them which questions to prepare for the exams along with the answers (page to page) are the most revered ones”

As you cannot challenge what is written in the textbook, the system discourages critical thinking. On the other hand, it revolves around scoring maximum marks by the students. Hence, the teacher and the taught are primarily focused on adopting strategies, which ensure high grades. Rote memorisation is one common tool. Students get so used to it that even while appearing for the CSS exam you find them mugging.

The situation is so grim that even at the university level, teachers who try to impart knowledge and invoke independent reasoning are disliked by most of the students while those who tell them which questions to prepare for the exams along with the answers (page to page) are the most revered ones. Agitations have been reported when the paper was “out of guess”. In South Punjab, university teachers considered going on strike when they were asked by the vice-chancellor of a university to conduct research. “Notes” are the most prized item and the common denominator, which binds all stakeholders in the system of education.

In the absence of cognitive development at the abstract level, dogmas and cliches are what we are left with to offer. When we fail to critically appreciate a phenomenon due to lack of an adequate reasoning ability, we replace it with high sounding words, slogans, and boastful pretensions, yet totally devoid of any substance. All this is couched in high emotionality.

Emotions further incapacitate us to think critically. Hence, we transform into a living being with little thinking and high emotions. Just forget about the illiterate, just see how a large part of our intelligentsia reacted to the murder of Salman Taseer, how we invented different theories on 9/11 — sometimes blaming the Jews and sometimes even the American establishment.

“An emotionally-charged individual devoid of critical thinking is the product of our educational system. .. academia, men of letters, politicians, judges, media persons, the generals and the mullah, all weary of rational thinking, not only charged with emotions but also displaying arrogance and self-righteousness.”

Anybody who hears about Aafia Siddiqui and Mukhtaran Mai gets emotional yet how many of us really know what actually happened to them. Should we recognise Israel as an independent state? No not at all, most would instantly respond. However, what is the harm in accepting a reality, when we recognise India, an “enemy country” why cannot we do the same in case of Israel. Here, nobody has the answer, yet a lot of sloganeering and emotionality.

Therefore, an emotionally charged individual devoid of critical thinking is the product of our educational system. Just look at our academia, our men of letters, our politicians, our judges, our media persons the generals and the mullah; all weary of rational thinking, not only charged with emotions but also displaying arrogance and self-righteousness. Intolerance is the natural consequence, which today is so pervasive in our society.

School is the nursery of the nation. As long as we do not replace the contents of the textbooks by setting aside our vested interests, by being honest and truthful and portraying the facts and not concocted stories, we will not be able to produce useful members of the civil society. More importantly, our educational system would never bring forth individuals who are creative, innovative and productive, with a scientific orientation towards their discipline and towards life unless we encourage critical thinking.
The present state of affairs is alarming in a society which presently lacks reasoning, is too emotional and is overflowing with intolerance.