Existing snow leopard population assessment studies tend to be conducted in the best habitats and cover areas that are too small to be representative of larger landscapes. This leads to inflated population estimates. 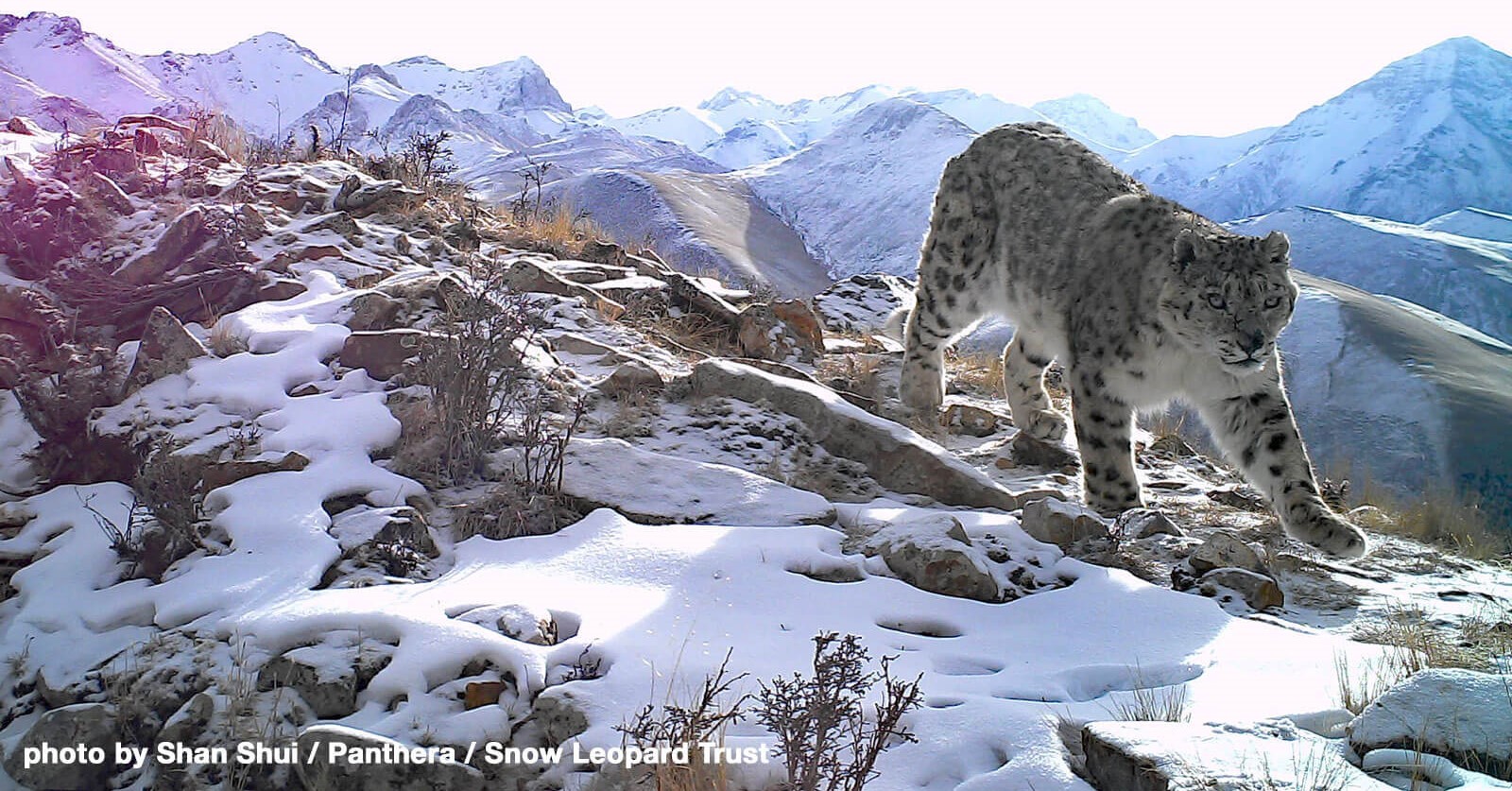 It’s become something of a truism in snow leopard research: we don’t have much of an idea about how many of these cats there are. A new study by Snow Leopard Trust scientists now shows the true extent of our lack of knowledge – and that the data we do have may not be useful for extrapolations.

“There have been lots of questions about how many snow leopards there may be in the world lately, and a lot of debate about how little we really know” says Snow Leopard Trust ecologist Dr Kulbhushan Singh Suryawanshi, the lead author of the new study. “So we decided to look into this question in more detail. We wanted to understand how much useful data on snow leopard populations really exists, and how reliable it is.”

To do that, Suryawanshi and his colleagues  — Munib Khanyari, Koustubh Sharma, Purevjav Lkhagvajav, Charudutt Mishra — started out by compiling and reviewing all the existing, peer-reviewed publications on snow leopard abundance anywhere in the world.

“At first glance, there are lots of reports and studies on snow leopard populations out there – but it turns out that many of them are based on interviews with local people, observations such as pug marks, or on expert opinion”, Suryawanshi says. “Those aren’t particularly useful methods to estimate snow leopard numbers. Interviews and sign surveys can tell you whether a species is present in a landscape. But they don’t allow you to draw any valid conclusions about how many individuals of the species there are. For instance, you can’t look at a set of scrapes and determine if they were left by a single cat or by several individuals”, Suryawanshi says.

To estimate the abundance of elusive and rare large carnivores like the snow leopard – or for that matter, the tiger – in a particular landscape, there are currently two methods recognized by the scientific community: camera trapping and genetic analysis of feces. Consequently, the team only included publications based on such methods in their study.

Suryawanshi and his colleagues expected to find a limited number of publications meeting these criteria – and indeed they found only 17 studies using camera trapping or genetics that have been published in peer-reviews journals across the world. Those studies were conducted in 6 of the 12 snow leopard range countries, and together cover less than 1% of the cat’s global distribution range. For the remaining six range countries – and 99% of the presumed snow leopard habitat – not a single peer-reviewed population study based on solid scientific methods exists.

That finding alone draws into question many of our assumptions about the world’s snow leopard population.

But Suryawanshi’s research not only documents the lack of our knowledge. It also finds that many of the studies that do exist have a bias towards better snow leopard habitats and tend to cover areas that are too small to be truly valid for the landscapes they are supposed to represent.

“When comparing all those published studies, we found a negative exponential relationship between the size of the area sampled in a particular study, and the snow leopard densities reported. In simple terms: the smaller a study’s sampled area was, the higher the density it reported”, Suryawanshi says. “This is particularly evident in studies cover

This limitation applies to more than half of the 17 peer-reviewed snow leopard population studies Suryawanshi and his colleagues investigated. “These are good, scientifically valid studies if you look at them at a local scale. The researchers who conducted them couldn’t have known how significantly the size of the study area would bias their results in such a significant way. But the fact that it does severely limits their value for any global population estimates”, Suryawanshi says.

One of the reasons why small study areas can be a problem is that they are rarely selected at random.

“As researchers we tend to look for and sample in the best habitats to maximize photo captures or scat samples. Often, these tend to be hotspots, where home-ranges of multiple snow leopards may overlap to some extent, perhaps because of high local prey density”, says Dr Charu Mishra, the Snow Leopard Trust’s Science & Conservation Director and coauthor of the study. “If we do that, we’ll end up reporting high population densities that are not at all representative of the entire habitat.

To understand this effect better, Suryawanshi and his colleagues next ran two simulations, using an existing set of camera trap data from Mongolia’s Tost Mountains, collected over a very large study area of 1,684 square kilometers. “When you look at this entire study area, the snow leopard density appears to be somewhere around 0.8 cats per 100 square kilometers. But what if the study area had been much smaller? How would that impact the results?”, Suryawanshi says.

In the first simulation, they divided the entire Tost study area into smaller rectangles, all centered around the same core zone of the mountains, which is a hotspot for snow leopards. Then, they looked at data only from cameras within those smaller rectangles, and calculated population densities for each of the different-sized rectangles. “For our smallest simulated study area, which measured 81 square kilometers, the density we calculated was five times higher than that of the largest area we simulated, which was 1,600 square kilometers”, explains Suryawanshi.

“In our review of existing studies, we saw a clear impact of study area size on the reported snow leopard densities. But from our simulations, it appears that the effect of sampling the best habitat patches, rather than random areas, is even more important than that of a small study area”, Suryawanshi says.

“Our calculations show that we ideally need to survey snow leopard abundance at a landscape level and choose the specific sampling areas randomly  – or select them systematically across the landscape – to make them representative, rather than just looking at results from a small section of the landscape where several cats overlap, and making extrapolations from there”, Charu Mishra says.

What does all this mean for a global population estimate?

As this new research has shown, we only have reliable data of how many snow leopards there are in certain small areas of their range and even those data tend to be from population hotspots.

“To be frank, there is a very real chance that our snow leopard population guesstimates may be far too high. And there is a 100% chance that they’re not reliable. Given that major conservation decisions that affect the snow leopard are being made on the basis of these guesstimates, this is a serious concern”, Suryawanshi concludes.

How to go forward from here?

The Global Snow Leopard & Ecosystem Protection Program (GSLEP), a high-level inter-governmental alliance, has brought together government agencies, conservation organizations and research institutions in an ambitious initiative called PAWS, which aims to come up with a reliable estimate of the global snow leopard population. Many of these agencies have been studying and monitoring snow leopard populations independently, in different parts of the snow leopard range; producing studies like the ones Suryawanshi and his colleagues have reviewed in their research.

Now, the challenge faced in PAWS is to agree upon and establish common, scientifically reliable methods to estimate snow leopard populations not just on a small, local scale, but globally. A scientific panel comprised of some of the world’s leading snow leopard ecologists and bio-statisticians is guiding the initiative, including the development of methodological and analytical tools towards this purpose.

It’s a complex process, but it can be broken down into two broad steps:

Step one is to make sure we survey the right places. “We will never be able to survey the entire snow leopard range and do a full count of the global population, so we have to work with samples. The big challenge we face is to ensure that these samples are representative” says ecologist Dr. Koustubh Sharma, the International Coordinator for the GSLEP program.

“The snow leopard range isn’t homogenous. There are areas that have lots of prey and lots of cats, and other parts with much lower population densities. So our sampling has to take this into account. Until now, as this work has confirmed, most snow leopard research has focused on the best habitats with the highest densities. That’s probably because these have been the best places to study these cats, given limited resources. But for a truly representative sampling of the entire snow leopard range, we’ll also need some studies to be done in less optimal habitats”, Sharma explains.

Step two is to make sure that the data resulting from these surveys is solid and comparable. “If each team uses completely different methods to survey their study area, it’s almost impossible to compare and draw any conclusions from their data. But if we all follow a common set of best practices for sampling and analysis, our data can feed into the big picture – a global population estimate.” This feature was first published, 10 February 2019. https://doi.org/10.1002/1438-390X.1027