Construction on the Dakota Access Pipeline in 2016. That year the project isnpired intense protests that lasted for months. Tom Stromme AP

There is a lesson for the people of Gilgit-Baltistan to learn in the remarkable victory of a native American tribe against energy giants and state coercive policy of the Trump.  The indigenous people after years of struggle for their right to a safe, pollutant-free home, got two multi-billion-dollar oil and gas pipeline projects shut down. 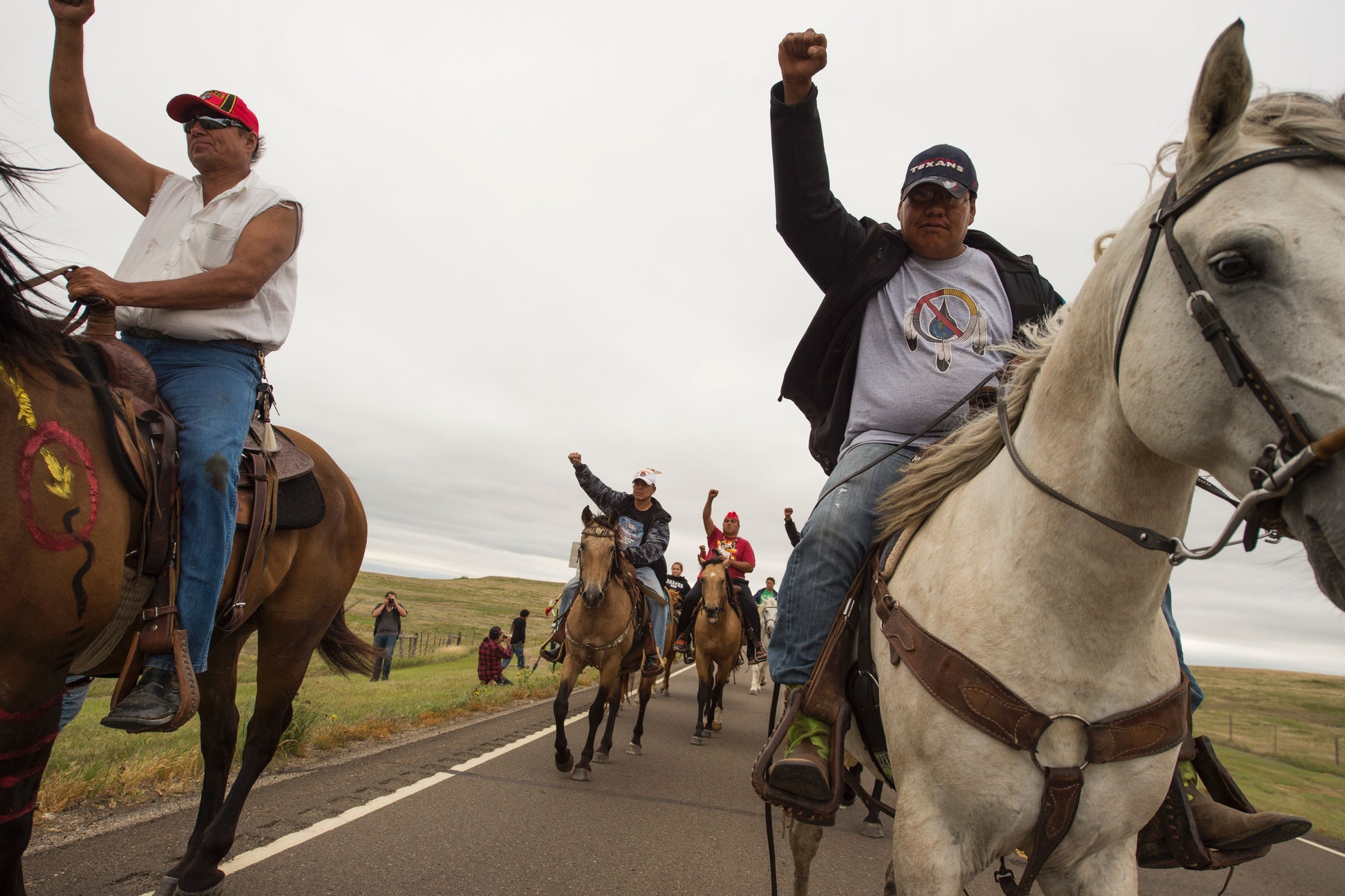 The Dakota Access Pipeline, an oil route from North Dakota to Illinois, USA, that has inspired intense protests and legal battles, must shut down pending an environmental review and be emptied of oil by Aug. 5, a district court ruled on Monday.

“This pipeline should have never been built here,” he added. “We told them that from the beginning.”
The ruling, by Judge James E. Boasberg of the US District Court, is the latest twist in a long-running legal battle. It essentially vacates a federal permit that had allowed the pipeline to operate while the United States Army Corps of Engineers, which had granted the permits for the pipeline, conducted an extensive environmental impact review.

The Dakota Access Pipeline has been carrying oil for three years. In 2016, it was the subject of months-long protests, and legal battles and political campaigns continued after the remnants of the protest camp were razed.

“It took four long years,” said Jan Hasselman, a lawyer with the environmental group Earthjustice who represents the Standing Rock Sioux Tribe. “But today justice has been served at Standing Rock.”

Members of Standing Rock Sioux Tribe, whose reservation is less than a mile from the pipeline, have long argued that a spill under the nearby Missouri River could pollute the water they rely on for fishing, drinking and religious ceremonies.

They sued in 2016 in Federal District Court in Washington to stop construction and won an early victory under the Obama administration when the Army Corps of Engineers announced it would seek alternative routes.

Four days after President Trump took office in 2017, he signed an executive memorandum directing the corps “to review and approve in an expedited manner” the pipeline. The move prompted rallies outside the White House and Trump International Hotel.
Oil was flowing through the pipeline by June 2017.

In March, Judge Boasberg ordered the federal government to conduct a sweeping new environmental review of the DAP. The ruling found that the pipeline’s “effects on the quality of the human environment are likely to be highly controversial,” and that the federal government had not done enough to study the risks of a major spill, or whether the pipeline’s leak detection system was adequate.
He also ordered both the tribe and the federal government to submit briefs on whether the pipeline should continue operating during the new environmental review. The Earthjustice lawyer said at the be shut down until the review was completed. Monday’s ruling granted that request.
“The shutdown will remain in place pending completion of a full environmental review, which normally takes several years, and the issuance of new permits,” Earthjustice said in a statement on Monday. “It may be up to a new administration to make final permitting decisions.”
Judge Boasberg’s ruling is the second triumph in two days for pipeline opponents. On Sunday, Duke Energy and Dominion Energy, two of the nation’s largest utility companies, announced they had cancelled the Atlantic Coast Pipeline, which would have carried natural gas across the Appalachian Trail. The companies said that lawsuits, mainly from environmentalists, had increased costs to as much as $8 billion from about $4.5 billion to $5 billion.

On Sunday last, Duke Energy and Dominion announced the cancellation of their natural gas pipeline project, the Atlantic Coast Pipeline. Citing constant legal challenges and rising construction costs — the pipeline had already nearly doubled its projected cost—the energy companies shuttered the project while Dominion separately announced its plans to sell off its other natural gas pipelines and storage assets to Berkshire Hathaway Energy.

Alone, the death of ACP would have been enough to stand out as a monumental achievement. But then, on Monday morning, the US District Court released another shocker: Because the US Army Corps of Engineers “violated the National Environmental Policy Act” when it issued a permit that allowed the Dakota Access Pipeline to run underneath Lake Oahe, the court ruled that the pipeline must halt all operations by August 5 until a new environmental review can be completed.

And there’s a vital message in the spectacle: These extractive projects which endangered the people in their path were in the end blocked specifically by the people who would be directly affected by them.

Through a multitude of means—direct action, political organizing, and, of course, court challenges—Native, Black, Hispanic, and white communities across the southeast organized first among themselves when Duke and Dominion came knocking, asking for community support or formal approval for their project. The same happened among the Standing Rock Sioux Tribe and the Cheyenne River Sioux Tribe when Transfer Energy Partners began developing DAPL. These communities all held conversations about whether the money was worth the potential of long-term poisoning of their communities. Many of them, like the Lumbee Tribe and Haliwa-Saponi Tribe in North Carolina, rejected the pipeline pay-offs. When the corporations teamed up with their own regulators and local and national politicians to circumvent this opposition, the people did what they could.

In Standing Rock, the affected tribal people constructed a camp that became a community of its own. They stared down the hyper-militarized, multi-state police force and the violent enforcement of a colonizing power’s will. They set aside national media outlets because those outlets had never accurately represented them. They used social media to break through to a nation long dismissive of Indigenous rights. And when the United States ploughed forward anyway, the tribal nations beat them in their own court.

One of the biggest victories against the ACP, up until this weekend, came in January, when the Fourth Circuit Court of Appeals sided with groups representing Buckingham County, Virginia, ruling that a permit for an ACP compressor station in the historic black community of Union Hill had failed to reckon with the projects’ possible disproportionate and adverse effects on a minority community. As some marginalized communities along planned pipeline routes realized early on, the courts were the only battlefield not slanted against them, and so it was the courts where they leveraged their power.

There are naturally brief addendums to this declaration of victory. For instance, the U.S. will have the opportunity to appeal the DAPL ruling, which Ron Ness, president of the North Dakota Petroleum Council, has already said his group plans to explore. Even if that doesn’t pan out, they can also address the permitting issue that the court ruled on, though that is estimated to require roughly 13 months to complete.

As Dr Ryan Emanuel, a Lumbee tribal member and associate professor at North Carolina State University, told me last fall when ruminating on the porous permit process, “If you ignore our existence in the preparation of these environmental documents, then you don’t acknowledge that we have any right to decide what happens on lands that are historically our territory, or places where our communities live today.”

This week, the people proved that ignoring them has a real cost. This article was first published in The New Republic online news magazine