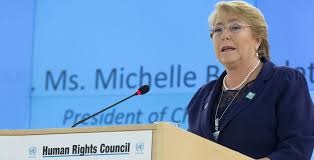 The internet and new digital tools are being manipulated as never before to infringe on people’s right to free assembly, the UN’s top rights official says in a call for a moratorium on the use of facial recognition technology during peaceful demonstrations.

GENEVA: UN High Commissioner for Human Rights Michelle Bachelet has called on states and businesses to ensure that new technologies, including facial recognition and so-called ‘less-lethal weapons,’ are developed and used in ways that do not disrupt and prevent people’s ability to exercise their fundamental rights to peaceful assembly and expression, and their right to participate in public affairs.

“New technologies can be used to mobilize and organize peaceful protests, form networks and coalitions, and help people to be better informed about demonstrations and the reasons they are happening, thus driving social change,” the High Commissioner said last Thursday.

“But, as we have seen, they can be – and are being – used to restrict and infringe on protesters’ rights, to surveil and track them, and invade their privacy.”

The Office of the UN High Commissioner for Human Rights has published a report examining the impact of new technologies on the promotion and protection of human rights in the context of assemblies, including peaceful protests.

The report notes that in 2019 protests took place across the world for complex and varied reasons, including in response to structural and racial discrimination and worsening socio-economic conditions, and that this discontent has continued in 2020.

There should be a moratorium on the use of #FacialRecognition technology in the context of peaceful protests, until States meet certain conditions including transparency, oversight and #HumanRights due diligence before deploying it.

“Given the importance of the enjoyment of the right of peaceful assembly for democracies, and the role Internet-based technologies can play, it is crucial that States close the digital divide and ensure the greatest number of people possible can get secure affordable Internet access,” the High Commissioner said.

States should also avoid resorting to Internet shutdowns, also called “network shutdowns”, “kill switches” or “blackouts,” which the report terms “a particularly pernicious way of interfering with ICT [information and communications technology] and thus also with assemblies.” At least 65 such shutdowns took place during protests in 2019, jeopardizing the right of peaceful assembly both online and offline. In addition, such Internet shutdowns were reported to have had a significant economic impact.

Technology-enabled surveillance has been a major factor in the shrinking of civic space in many countries, with States resorting to intrusive online surveillance and the hacking of ICT tools and social media accounts used by those planning or organizing protests, as well as of protesters themselves.

One particular aspect detailed in the report is the use of facial recognition technology, which allows for the automated identification, surveillance and tracking of protesters. The report note that many people feel discouraged from demonstrating in public places and freely expressing their views when they fear they could be identified and suffer negative consequences. Moreover, facial recognition technology may also perpetuate and amplify discrimination, including against Afro-descendants and other minorities.

The report urges states to avoid the use of facial recognition technology to identify those peacefully participating in an assembly, and to refrain from recording footage of protesters unless there are concrete indications participants are engaging in, or will engage in, criminal activity.

“As people gather worldwide to protest against racism, including by law enforcement officials, the right to peaceful assembly has never been more important,” Bachelet said. “Facial recognition should not be deployed in the context of peaceful protests without essential safeguards regarding transparency, data protection, and oversight in place.”

The report also details the responsibility of private companies to carry out human rights due diligence, in particular, to ensure that data protection and non-discrimination requirements are included in the design and implementation of these technologies.

The use of other new technologies, specifically less-lethal weapons and ammunition, is also examined in the report. While batons, pepper spray and tear gas have been used by law enforcement officials for many decades, advances in technology have led to the development of new types of less-lethal weapons and ammunition that are used to crackdown on protesters. These include conducted electrical weapons such as “Tasers”, advanced kinetic impact projectiles, pepper balls and pepper ball launchers, acoustic weapons and drones and autonomous systems that deploy tear gas.

“So-called less-lethal weapons have caused devastating harm when used during peaceful protests across the globe. While these weapons may be needed in some law enforcement settings, there is an urgent need for their use to be closely monitored and the standards of necessity and proportionality to be rigorously applied,” Bachelet said. “A less-lethal weapon can kill if it is improperly used, whether deliberately or accidentally. Mandatory training in less-lethal weapons for law enforcement personnel is also essential, as is ensuring accountability for human rights violations related to their misuse.”

She also urged them to take into account the United Nations Human Rights Guidance on Less-Lethal Weapons in Law Enforcement issued recently by her Office.

In a call for mandatory training for law-enforcement personnel on the use of crowd control weapons – and accountability for rights violations related to their misuse – the High Commissioner explained that they “can kill if …improperly used, whether deliberately or accidentally”.

According to OHCHR protests took place in some 80 countries around the world in 2019, with many grievances at the core of the 2030 Agenda for Sustainable Development.

This year, people in thousands of cities worldwide took to the streets in the wake of the death in the US of George Floyd, whose death on 25 May in Minneapolis was captured on video, while a police officer knelt on his neck for over eight minutes.

This was despite the fact that the technology was allegedly “prone to errors”, she continued, urging its proportionate use.

“That means in this context that misidentification could lead to wrongful arrest for example or prosecution. These risks we know are substantially greater for women and people of colour, raising the likelihood that facial recognition technology may perpetuate and amplify discrimination.”

It was also deeply concerning those protesters faced having their cell phone calls intercepted or blocked by “many” police forces, or their social media accounts hacked and systematically monitored.

“Too often authorities have viewed peaceful assemblies as something that needs to be controlled or managed, rather than as critical vehicles for public participation in democracy”, Ms Hicks told journalists via video conference in Geneva.

Among its recommendations, the OHCHR report urged States to avoid resorting to internet shutdowns, which happened during at least 65 protests in 2019.

Addressing the fact that only around half of the world’s people have access to the internet today, Ms Bachelet also insisted that it was “crucial” that States ensure secure and affordable online access for everyone.

“Given the importance of the enjoyment of the right of peaceful assembly for democracies, and the role Internet-based technologies can play, it is crucial that States close the digital divide and ensure the greatest number of people possible can get secure affordable Internet access”, the High Commissioner said.