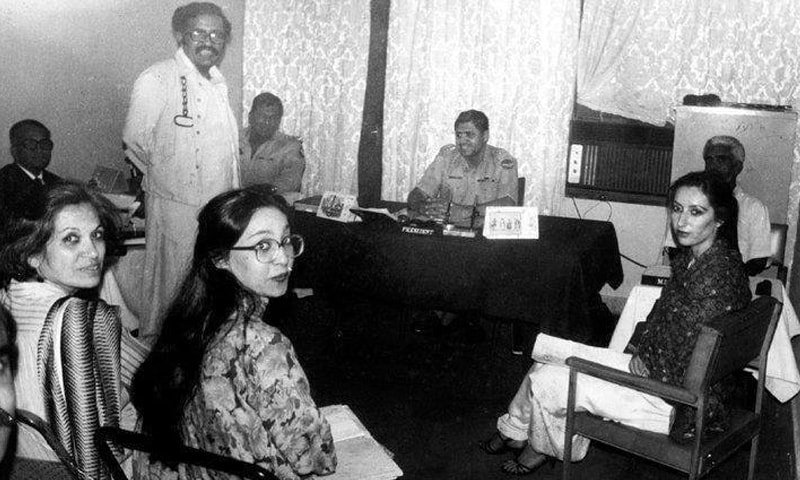 KARACHI: Veteran leftist politician Jam Saqi, who passed away in Hyderabad on Monday after a prolonged illness, was one of the country’s best-known communist leaders, who was arrested, tortured and imprisoned by both civilian and military governments.

Jam Saqi was born on Oct 31, 1944, at Jhajj, a small village in Chhachro, Tharparkar district (Sindh). His father was a primary school teacher as well as a known social worker.

Jam Saqi passed his matriculation examination from Chhachro in 1962 and got admission in Kalimori Government College. A pamphlet written by Dada Ferozuddin in 1953 on the political implications of vernacular languages in Pakistan helped Jam Saqi and his friends form their views about language issues. Later, in one of his own pamphlets, Jam Saqi demanded the status of the national language for all the country’s provincial languages, with Urdu as the lingua franca.

Jam Saqi wrote his first popular pamphlet, which was banned by the military government, against the One-Unit Scheme. Later, he and Ponus Khatri, Ismael Adijo, Bazin Bizenjo and Asif Mirza initiated the Hyderabad Students Federation (HSF), which held its first convention in November 1964; Jam Saqi became the general secretary.

When Zulfikar Ali Bhutto was invited to the HSF convention, he feared that the Ayub Khan regime would threaten the students’ movement with aggression. Jam Saqi wrote back to assure Bhutto of his support. This was the first public gathering that Bhutto attended after resigning from Ayub Khan’s government. Later, the views of Jam Saqi and Bhutto differed. Jam Saqi supported the Tashkent Agreement and opposed the One-Unit Plan. Bhutto ordered Jam Saqi’s arrest once he took over the office of the president of Pakistan in 1971.

The young man never took a serious interest in academics. He joined Wapda but left after five months to concentrate on political activities. Despite abject adversity, he never failed to go to the university hostel to continue his political work among students. He also took an active part in Fatima Jinnah’s political struggle.

Jam Saqi and his colleagues established the Sindh National Students Federation (SNSF), and he was chosen as its president. He became a member of the CPP on June 7, 1963, and was jailed every year between 1966 and 1969.

The politician married Sukhaan on March 3, 1968; she ended her life when rumours of her husband’s death during custody spread in 1978.

Jam Saqi presided over the first session of the Pakistan Federal Union of Students in Lahore on May 6, 1970. In March 1971, when Gen Yahya Khan ordered the military operation in the then East Pakistan, Jam Saqi organised a procession and thereafter had to go into hiding. Subsequently, he was tried by a military court in his absence and the court sent him on a year-long imprisonment.

The National Awami Party (NAP) and Jamiat Ulema-i-Islam (JUI) formed joint governments in Balochistan and the erstwhile NWFP in 1972 and Mir Ghaus Bakhsh Bizenjo became the governor of Balochistan. It was then that Jam Saqi resumed public political activities. However, he was detained again while he was addressing a joint gathering of the NAP and the Haari Committee in Nawabshah.

With nobody allowed to meet him for many weeks, Jam Saqi embarked on a 12-day hunger strike and subsequently had to be moved to a hospital. The then chief minister of Sindh, Mumtaz Bhutto, ordered his transfer to Multan prison, where he was incarcerated as a Class C criminal and had completed the jail term.

The year when a new constitutional framework was being discussed, 1972, the Communist Party of Pakistan (CPP) had already rejected it citing that it was ceding more space to the religious circles and that the provinces were being deprived of their autonomy. Mir Ghaus Bakhsh Bizenjo believed that the CPP’s position would be used as a pretext for the large-scale arrests of its members once again. Jam Saqi, however, believed that the CPP must oppose the new law openly. Mir Bizenjo’s apprehensions proved correct and Jam Saqi had to go underground once again.

Jam Saqi was taken into custody again during Gen Zia’s regime, taken to Hyderabad garrison and tortured. Thereafter, he was transferred to the Shahi Qila in Lahore and subjected to torture again. It was during this period of detention that a police officer informed him of his wife’s death.

Brought to the Lahore High Court on July 2, 1979, and flown back to Karachi on July 15 where he was shifted to an army camp, Jam Saqi embarked on a hunger strike again and was shifted to Sukkur jail. After five years of detention and three years of solitary confinement, a special court in Hyderabad announced a further decade of rigorous imprisonment for him. Jam Saqi was given into judicial custody on Feb 27, 1980. The military detained Nazir Abbasi, Professor Jamal Naqvi, Sohail Sangi, Bashir Ahmed and Kamal Warsi from Karachi on July 30, with Nazir Abbasi dying because of torture. The special military court announced its verdict on Jan 16, 1985, but reserved its verdict on Jam Saqi, who remained under solitary confinement for a long time. Finally, he was released on Nov 9, 1986.

The politician contested the Sindh Assembly elections of 1970 and 1988 from Tharparkar but did not win. He was selected as the secretary general of the CPP in 1990 but resigned in 1991, thereafter starting a democratic movement. On June 22, 1994, Jam Saqi joined the PPP. He also joined the Human Rights Commission of Pakistan as a member.

Jam Saqi is survived by his second wife, Akhter Sultana, and children.

This obituary piece was originally published in Dawn on March 6th, 2018