December 03, 2022
Editor-in-Chief: Farman Ali
Home Archives Riches from rags, Ahmed’s paintings a window to his past, reflection on relationships

The exhibition titled, Aayiney (mirrors) was inaugurated by Austrian Ambassador Briggitt Blaha on Ocxtober 3 at Nomad Gallery that was followed by the screening of a short documentary on the artist’s work.

A large number of people including art aficionados, members from the diplomatic community, artists and art students thronged Nomad to appreciate the experimental work of Ahmed.

“Ahmad is a versatile artist, a teacher, poet and actor. He has created a unique style of collage using personal belongings and worn-out items in the Picassian tradition,” commented ambassador Blaha.

The artwork is a window to the artist’s life, a mirror of his past and expression of his emotional attachment with personal belongings and the memories attached with certain moments of his life, she observed.

“He has created riches from rags in a unique and inspiring narrative,” commented Nageen Hyatt, the curator, and director of the gallery.

Used fabric plays a pivotal role in creating rich, but sensuous surfaces as the textures absorb your senses in creativity and poetic nuances while words play hide and seek as in the app 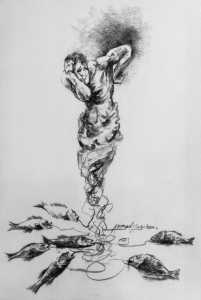 roach of a bridge to cross over to fertile ground and imagination, said Ms Hyatt.

Ahmed believes in self-reflection on relations not only with other human beings but also with non-living objects around him which had been in his personal use.

For instance, in the embossed butterflies, he has used ragged pieces of worn-out clothes, buttons, and wires, to capture his fond memories and precious moments associated with them.

In the giant painting Heart of Sun and Moon Temple and Goodbye Blue Sky in acrylic on canvas, he has used bright colour showing his strong emotions.

Most of the paintings are based on Ahmed’s poetry.

Talking to High Asia Herald about his new experimental work in mixed media, he said it was something new and certainly a gamble which I had been yearning to do a long time.

“I am a nomadic person in nature always in search of my inner self, reality and new horizons in the art to express my feelings,” Ahmed said.

“These paintings are the heart and soul of my past full of predicaments, failures and my idiosyncracies which can play mirrors to many,” he commented.

“I have used my personal belongings as 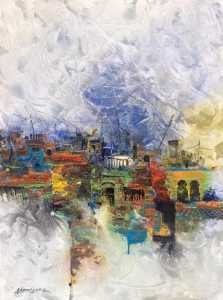 mirrors into my soul. I believe that humans too can develop an emotional relationship with non-living things such as old and worn-out clothes as they are the windows into our past,” he explained.

These objects have imprints on them our fragrances, joys, and sorrows and they can take you back on a déjà vu trip down to your fading memory lane, he said.“My art revolves around my own orbit, spreads around my space and objects,” Ahmad said.

For Ahmed, humankind’s unending journey towards achieving the self-reliance in self-development makes a human superior from the rest of the species.

About the measurement of self-development and self-reliance, he said, “as an artist I have come a long way where both my friends and critics have been quite vocal about the work that forces me to face the mirror of my development every day, comments Ahmed, who is author of two books — Chakor Ki Chahat and Terey Shehr-e-Dill Sey Uth Aye, (collection of poems). His two books — Ehsaas-e-Jurm k Sooraj, a collection of short stories and Ajanta ki Moorat (poems) — are under process.

He has written and directed a play Wafa key Putley, acted in PTV Home’s plays Lahoo Aur Qaleen and Rang Bolte Hain. He has written a play Khayal Rakhna and also acted in it as well as in another play Main Bhi Pakistan Hun.

Ahmed Habib has participated in 10 solo shows and 28 group shows since 1995 mostly in Islamabad, Lahore and Rawalpindi as well as abroad and won several awards and accolades, including ‘Haydery Award’ and ‘Artist of The Year Award’.

He has donated his artwork to Hunerkada and Nomad for earthquake affected people, conducted art awareness workshops throughout the country, art therapy workshop for flood-affected children in Sindh, on violence against women.