• A stump mic caught Sarfraz abusing Andile Phehlukwayo, • He has since apologised to Phehlukwayo, who forgave him

The International Cricket Council said Sarfraz breached its anti-racism code in a one-day international in Durban.

Sarfraz, 31, later apologised and claimed his words were “not directed towards anyone in particular”.

The wicketkeeper will miss two one-day internationals and two Twenty20 matches, all against South Africa.

Sarfraz made comments to South Africa’s Andile Phehlukwayo – picked up by the stump mic – during Tuesday’s second one-day international in Durban. The ICC chief executive, David Richardson, said those actions had been taken into consideration when determining the punishment.

“The ICC has a zero-tolerance policy towards conduct of this nature,” Richardson said. “Sarfraz has promptly admitted the offence, was regretful of his actions and has issued a public apology, so these factors were taken into account when determining an appropriate sanction.”

Sarfraz met Phehlukwayo on Friday to apologise for his remarks.

Sarfraz posted a picture of the meeting on Twitter, writing: “This morning I apologised to Andile Phehlukwayo and he was gracious enough to accept my apology and I hope the people of South Africa also accept my apology.”

The ICC added that Sarfraz will now undergo an education programme relating to the offence, while the Pakistan Cricket Board remains unhappy with the decision despite Sarfraz’s apology.

“The PCB notes the ICC decision on Sarfraz Ahmed with its utmost disappointment,” a statement said. “PCB had anticipated that the matter had been resolved amicably between the two players and the two boards following Sarfraz’s public apologies which were accepted by the player, the board and South Africa cricket team.

“The PCB will be pursuing this matter at the ICC forums with the objective to bring reforms to the code, promoting amicable resolutions to issues as opposed to penalties. Having said that, the PCB reiterates its zero-tolerance approach towards racist comments and behaviour.”

Though Sarfraz is eligible to return for the final T20 match of the series on 6 February, the PCB also indicated that his tour was over. “In consultation with Sarfraz it has been decided that he will return to Pakistan immediately,” the statement added. “Shoaib Malik will captain the team for the remaining ODIs and T20 internationals of the series, while Mohammad Rizwan has been included in the T20I side.”

The world governing body opened an investigation after Sarfraz was caught on a stump microphone using the Urdu word “kaale”, meaning “black”.

Sarfraz will also have to go on an ICC education programme.

He was charged under a part of the section of the code relating to “conduct (whether through the use of language, gestures or otherwise) which is likely to offend, insult, humiliate, intimidate, threaten, disparage or vilify any reasonable person… on the basis of their race, religion, culture, colour, descent, national or ethnic origin”. 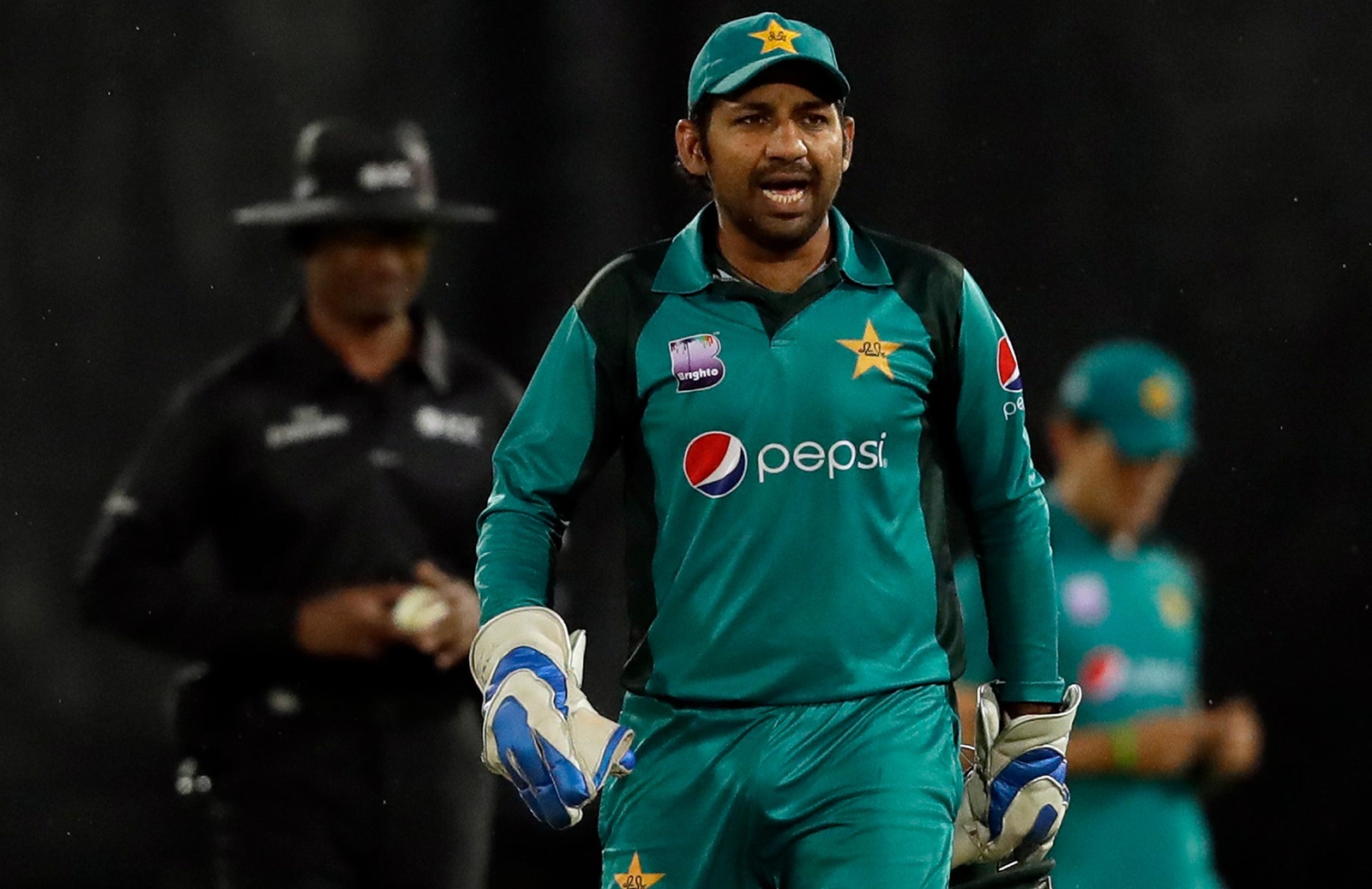 with Sunday’s fourth ODI in Johannesburg and the player will return to Pakistan, with all-rounder Shoaib Malik stepping in as captain for the rest of the South Africa tour – even though Sarfraz would have been available for the final T20 match on 6 February.

Back-up keeper Mohammad Rizwan, who has taken the gloves in Johannesburg, will remain with the squad for the T20 leg of the tour.

Sarfraz’s comment, which was broadcast by the stump microphone, has been translated as: “Hey black guy, where’s your mother sitting today? What (prayer) have you got her to say for you today?”

The skipper’s suspension became apparent when he did not emerge for the coin toss in Johannesburg today, with veteran Shoaib Malik joining Proteas skipper Faf du Plessis in the middle of The Wanderers.

The ICC also said “Sarfraz will also have to undergo an education programme to promote the understanding and awareness of issues directly relevant to the offence that he has committed”.

Pakistan shrugged off a four-match suspension imposed on captain Sarfraz Ahmed with a crushing eight-wicket win over South Africa in the fourth one-day international at the Wanderers Stadium on Sunday.

The result levelled the five-match series at 2-2. The deciding match will be in Cape Town on Wednesday.

Pakistan’s bowlers set up the win, bowling out South Africa for 164. Imam-ul-Haq made 71 before playing a loose shot when the scores were level as Pakistan cruised to victory with 18.3 overs to spare.

Stand-in captain Shoaib Malik said at the after-match presentation that Pakistan only found out after they arrived at the ground that Sarfraz had been banned under the International Cricket Council’s anti-racism code for remarks aimed at South African all-rounder Andile Phehlukwayo during the second match in Durban on Tuesday.

Malik handled his bowlers and fielders astutely and South Africa were kept under pressure almost from the time he won the toss and sent them in on a pitch which had early life.

“It is a great honour to represent your country, as a player or a captain,” said Malik. “When the responsibility comes you should make sure to give it your best shot.”

Malik’s use of spinners Imad Wasim and Shadab Khan kept the scoring rate in check and both batsmen fell to the slow men before the fast bowlers returned.