CANBERRA: Pakistan’s women launched their campaign in the ICC T20 World Cup with a magnificent eight-wicket win over West Indies in a group ‘B’ match when they outperformed the 2016 winners at the Manuka Oval ground in Canberra on Wednesday.

Sharp New Ball bowling by Diana Baig triggered a fight in the Windies top order, and only when Stafanie Taylor and Shemaine Campbelle were at the fold did they look fluent. In the end, they posted 125/7 comfortably for the loss of only two wickets in 18.2 overs against the West Indies.

Pakistani openers Javeria Khan and Muneeba Ali expertly controlled the chase with a 58-run partnership in 7.2 overs before Captain Bismah Maroof’s undefeated 38 led their team to their seventh win at the T20 Women’s World Cup.

Javeria, later adjudged player-of-the-match, executed some delightful shots during her 35-run innings that came off 28 balls and included six fours, before the right-handed batter was dismissed by West Indies’ captain Stafanie Taylor.

Muneeba was dismissed for 25; her 26-ball innings included three fours. After Muneeba’s dismissal at 77-2 in 11.5 overs, Nida Dar joined captain Bismah Maroof in the middle.

The two carried Pakistan home with an unbroken 50-run stand in only 39 balls. Seasoned Bismah struck an unbeaten 38 of 37 with the aid of four fours. Nida gave her captain solid support at the other end as she also returned undefeated on a 20-ball 18.

Taylor and Afy Fletcher took a wicket apiece for the West Indies.

Earlier, after electing to bat first, West Indies were rocked on the very first ball of the innings as opener Hayley Matthews was trapped leg-before off pacer Diana Baig. Diana then dismissed the other opener Lee-Ann Kirby (16) to reduce West Indies to 25 for two in 4.1 overs.

Nida then accounted for star West Indies batter Deandra Dottin (1) with her off-spin to leave the West Indies tottering at 28-3 in 6.2 overs. At this stage, the West Indies were rescued by a 60-ball 63-run partnership between Taylor and Shemaine Campbelle.

Both scored 43 runs each, Taylor faced 47 balls and struck two fours and two sixes while Campbelle’s 36-ball effort also included two fours and as many sixes.

Aiman Anwer followed up the good work done earlier by Diana and Nida by taking two wickets to restrict West Indies to a modest total.

Speaking after the match, Bismah said she lauded her players’ show.

“We picked up wickets at crucial times when we needed and put them under pressure, and then how our openers played, credit to them.”It couldn’t have started better with Amy Jones stumped off the second ball of the day, and when Danielle Wyatt went without scoring the three-time finalists England were reeling at seven for two.

“We really wanted this win to get the momentum going into this World Cup,” said Bismah. “I’m really proud of this bunch and how we played today.

Pakistan now play England in their second group ‘B’ match on Friday at the same venue.

Nerveless chase from Pakistan, who open their #T20WorldCup with a spectacular win against 2016 champions West Indies

How impressive was that! #WIvPAK

357 people are talking about this
The Windies’ top order stalled and was three doors down in seven overs in the second game in a row. Hayley Matthews, star of the 2016 T20 Women’s World Cup final, fell in love with a diamond duck when Diana blew the first ball of the game in the air and rapped the opener on the pads.

Lee-Ann Kirby’s stand-and-deliver approach had three quick limits when she lofted Aiman ​​Anwar for four in the middle of the off and then covered in the fourth over. But she died on the first ball of the fifth when she missed Muneeba Ali at one point and left for 16.

Deandrea Dottin’s restless wrinkle end ended when she tried to pull Nida Dar over the stump from the outside and could only find Iram Javed, who left for 1 in 10 balls.

Her side might’ve lost, but Stafanie Taylor remained a rock for West Indies 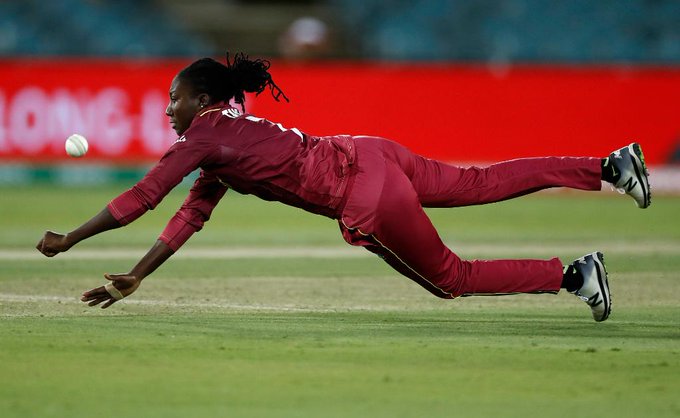 Pakistan’s opening couple was cautious at the start of their response. The thick edges of the slip cordon made three boundaries within the first four overs when they reached 28. Henry’s medium pace caused few problems when Javeria cut it and then pulled the rope, and Muneeba intervened with a steady drive when the over 14 runs lasted.

Muneeba, whose opening partnership of 58 with Javeria Pakistan’s highest stand on the first wicket of the tournament, was unable to select Fletchers Googly on the 25th and could only compete against Anisa Mohammed at Midwicket.

Bismah took 24 balls to find her first boundary but continued to use her sweep well to spin and hit hard behind the square. Nida Dar provided composed support with errors from Taylor and Nation that were symptomatic of a disappointing Windies field display.

Pakistan was unconcerned in the closing stages, and Bismah reached the winning limit when its 50 runs partnership with Bismah paved the way for a memorable win.

The experienced duo Taylor and Campbelle stabilized the ship. Campbelle, who played T20I games against Thailand for a century, missed an attempted setback against Anam Amin, and although Bismah’s transfer was not made on the field, she chose £43.

All-rounder Chinelle Henry was unable to settle and fell on her fourth ball when Anam got a catch, but she left when she was trapped for four pounds against Aiman ​​Anwar on the other side of the line. Taylor dropped her foot on lap 18, carted Aiman’s low full throw over the center of the wicket, and was clearing the long line from Dar before picking Diana on the cow corner fence for 43 of 47 balls.

Taylor turned to turn after the powerplay, but Javeria was well-positioned and took the boundaries of Matthews and then Afy Fletcher twice. The Windies skipper needed it to remove Javeria, who misjudged the length of a straight and left lbw for a well-made 35.

Meanwhile in another one-sided group ‘B’ match played on Wednesday at the same venue, England crushed minnows Thailand by 98 runs.

England skipper Heather Knight smashed the first century of the Twenty20 World Cup as England emphatically got their campaign at the mega event back on track.

The 2009 champions had looked vulnerable as they crashed to a six-wicket defeat against South Africa in their opening group ‘B’ game on Sunday, following a shock 10-wicket hammering by Sri Lanka in their final warm-up last week.With only the top two from each of the two five-team groups qualifying for the knockout phase, defeat in Canberra would have left their tournament in tatters.
But Knight hit an unbeaten 108 in a tournament-best 169-run partnership with Natalie Sciver (not out 59) to secure the vital win. England’s 176 for two was also the highest score by any team so far.
But Knight and Sciver steadied the ship and set about building a big total.
Knight brought up her maiden T20 century off 63 balls, with 13 fours and three big sixes, while Sciver smacked her second successive half-century as the Thai bowlers took a pounding.
Thailand lost opener Nattaya Boochatham in the first over and despite a breezy 32 from Natthakan Chantam were never in the run chase as England restricted them to 78 for seven.
Load More Related Articles
Load More By thehighasia
Load More In Latest
Click To Comment