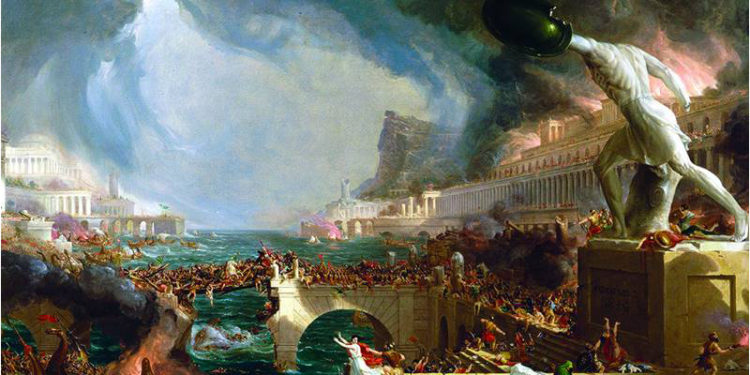 In Askari’s view, the West became victim to depravity in its quest for progress

In order to understand the depth and causes of Muhammad Hasan Askari’s disenchantment with modernity, Marxism and “the West”, it is necessary to go over the fundamental Marxian ideas that became so distasteful to him over time.

I have described the principles of historical materialism in detail in my three-part essay on Marx’s bicentennial carried in these pages back in 2018. Here a summary of these will suffice.

Marx says that the economic structure of society is the basis on which the upper storeys of law, politics, philosophy, and literature, etc. are established. The various forms of social conscious

ness also correspond to these. It is the very mode of production of material life which generally determines the paths of the social, political and intellectual action of life. “The consciousness of people does not determine their existence, in fact, their social existence determines their consciousness.”

But this absolutely does not mean that the economic structure of society is everything and human consciousness and other actions do not affect social life. Removing this misunderstanding, Engels writes in a letter on the 21st of September 1890 from London:

“According to the materialist idea of history, the ultimate deterministic element is the creation of actual life and the renewal of this creation. Marx neither claimed further than this nor myself. Therefore if a person by distorting it says that the economic element is indeed the sole deterministic element, then he changes our totality into an absurd, bare and meaningless phrase. Economic condition is the basis but the various elements of the superstructure, for example, the political forms of class struggle; the constitution which the victorious class enacts after a successful war; legal forms, even upon the reflex action of all these actual struggles; and political, legal, philosophical ideologies and religious beliefs and their systems of obedience. All influence the manner of historic struggles and sometimes even dominate the determination of their forms. There is an interaction working among all these elements.”

Clarifying this same point, Engels writes in another letter to Borgias on the 25th of January 1894:

“The political, legal, philosophical, religious, literary and artistic development rest upon the economy. But they all react upon one another and upon the economic base. It is not the case that the economic situation is the cause, alone active (emphasis original), and everything else only has a passive effect. Rather there is a reciprocal interaction with a fundamental economic necessity which in the last instance (emphasis original) asserts itself.”

Now Muhammad Hasan Askari is, of course, anxious to save people from Western depravity, but he has totally neglected to pay attention to the real problems of their life. He sees many basic flaws in “modernity”, but he presents little that could be seen as a solution to these problems.

Askari offers a vague return to medieval-style religiosity as a cure for depraved modernity, but he does not ask himself this question: a common Muslim offers prayers with great humility, fasts and tries to follow other pillars of the faith to the best of his ability; despite this, if he is the victim of so many kinds of sorrows and miseries for the last 400-500 years, why is that? What are the causes of poverty, illiteracy, intellectual backwardness and moral decline, which are the fate of the people of the East centuries before the influence and imposition of the West? And what is their cure?

Askari’s school of thought claims that the Muslims relegated religious teachings to the back and therefore they declined. But in the same breath, it is also said that the people of the West have stopped caring about religion in their ambition for worldly progress. It is strange indeed that carelessness and distance from religion became a cause of a decline in the East and of progress in the West!

The people of the West brought down the dictatorial monarchy, the Church and the nobility – those three pillars of the feudal order. They brought about the Industrial Revolution through the progress of scientific knowledge and arts because progress was impossible without fulfilling these historic obligations. On the other hand, feudalism remained dominant over the East and society became a victim of stagnation. The circumstances of life demanded a change in the mode of production and relations of production. But feudalism was not just a mode of production, in fact, it was a way of life that was also dominant over the entire system of thinking and feeling of society. Even though the feudal mode of production and relations of production have passed or are passing – and now they are subordinated by global capitalism – but Mr Askari and his allies are trying with all their might that the obsolete values and traditions of the feudal era remain mounted on our heads like the Sindbadian string-legged saint. In fact, the imperial West itself found itself supporting such elements here.

In his critique of modernity and progress, Askari misses out on the fact that this is the very mentality that prohibits us from gaining benefit from reason, rationality, democracy, equality and humanism, the freedom of thought of the individual, and science and other modern knowledge.

For material, intellectual and moral progress it is necessary for societies to struggle for a system based on justice and equity; in which every person has full opportunity to bring forth and beautify their creative abilities, in an environment of complete freedom for self-attainment and self-adornment. The essay was first published in The Friday Times, Lahore.

Note: All the translations from Urdu are the writer’s own.

Raza Naeem is a Pakistani social scientist, book critic, and award-winning translator and dramatic reader currently based in Lahore, where he is also the President of the Progressive Writers Association. He can be reached at: [email protected]