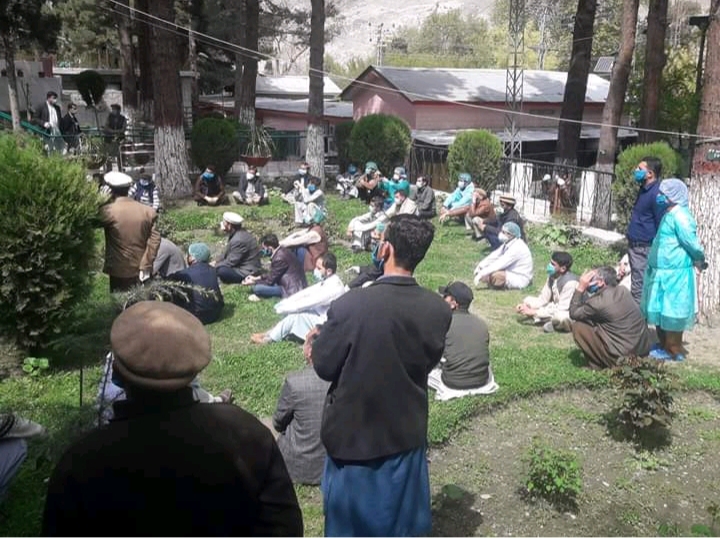 Gilgit: The health workers in District Headquarters (DHQ) hospital here continued their protest against alleged manhandling and mistreatment of their colleague by the law enforcement personnel.

They accused the police personnel of beating up their colleagues at checkpoints. They warned the government to go on a strike if actions were not taken against the LEAs involved in such incidents.

Local journalists have also been subjected to mistreatment and intimidation by the police while performing their professional duties during the lockdown.

Faheem Akhtar, President Media Workers Association told The High Asia Herald that Mehtabur Rehman, a reporter of daily Baad-e-Shumal was arrested by the police and quarantined for highlighting the mismanagement and poor arrangements of government for the COVID-19 patients in Gilgit.

He alleged that other reporters had been stopped at checkpoints and humiliated by law enforcers without any reason, describing it as a violation of the fundamental right to freedom of the press and an attempt to muzzle dissenting voices. 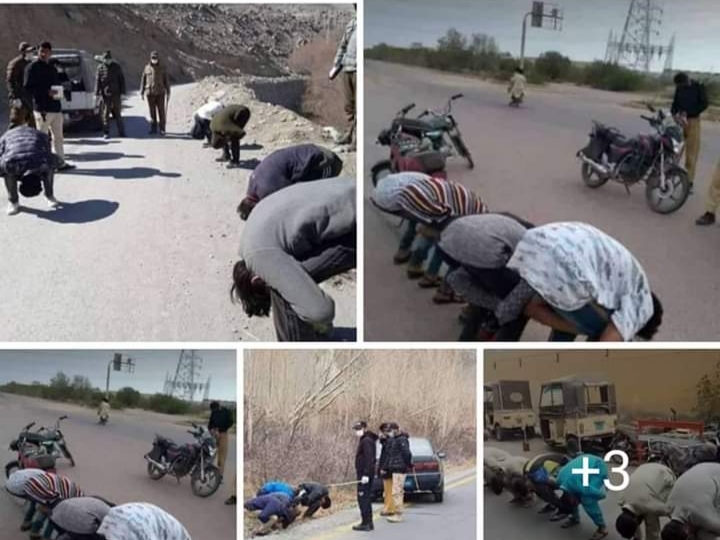 The Human Rights Commission of Pakistan representative Israruddin Israr said a number of people had also complained that they had been made ‘murgha’ (stress position corporal punishment) by the law enforcement personnel even for going to the nearest shops in their localities to purchase edibles and medicine.

Police beat them without listening to their grievances, he said.

Likewise, according to Mr Israr, in Skardu police had beaten up the son of a senior journalist who later posted the CCTV footage of the incident on social media.

In a similar fashion, police had tortured and beaten up dozens of people in different parts of GB. He said a group of young people had been made murgha in Nomal 15km off Gilgit city. The video clipping of the incident has also been posted by a local journalist on social media.

Several complaints have been received from the Ghizer district where police have been forcing the shopkeepers to close down their grocery and vegetable shops.

The GB government had already announced that the vegetable shops and general stores would remain open.

There are some reports from Ghizer that despite lockdown, many Tablighee Jamaat members have been roaming in the district which has created a panic in local communities because many cases of COVID-19 have been reported in different parts of the country.

Hundreds of students from GB now residing in Sindh and Punjab have complained that they have no means to leave for their homes as transport is not available due to countrywide lockdown. They have requested GB government to arrange transport for them. Sadly the GB government has not arranged any transport yet.

Meanwhile, KP police reportedly stopped some buses and tortured many students of GB at Mansehra. The students were traveling from other cities to GB.

Complaints have also been received from Gilgit, Skardu, and Diamer that there is a shortage of food, drinking water and load-shedding of electricity which have created unbearable difficulties for local people during the lockdown.

People in Jutial, Baseen, and Danyor have staged protests against the setting up of quarantine centres in residential areas and congested population of Gilgit city and have demanded to shift them outside the city.

GB has one corona testing machine which can carry out only 15 tests in a day.

Nagar and Baltistan have hundreds of patients who are waiting to be tested or results of their tests.

Hundreds of patients suffering from other diseases are lying on the beds of hospitals and their homes, as doctors and paramedic staff are busy in corona related emergency duty, hence nobody cares for other patients. On the other hand, the private clinics in the city are also closed.

Mismanagement can be seen in GB in the wake of corona outbreak and subsequent lockdown.

Nobody cares for the protection of sanitation workers, support staff, police, drivers and other workers affiliated with the health department.

Human Rights Commission of Pakistan representative Israruddin Israr has urged the GB government to pay heed to the complaints of local people, a helpline should be established to address the complaints, it is deplorable that govt is creating more troubles for the people who are already facing very critical situation due to lockdown. We also urge the Govt to establish a desk to monitor the news and issues highlighted by media and social media so that necessary steps would be taken to overcome the emerging problems. An effective policy should lay down to deal with the pandemic otherwise merely lockdown is not enough to control the pandemic. Israruddin, coordinator HRCP GB.

Pakistan Federal Union of Journalists president Shehzada Zulfiqar and general secretary Nasir Zaidi have also condemned the mistreatment of journalists in Gilgit and Skardu. They demanded an end to harassment and intimidation of reporters.