Parents’ role is significant in shaping, grooming and nurturing their children’s physical, intellectual, social, psychological, spiritual and aesthetical dimensions so as to make them a diligent and decent members of society.

However, not all children are lucky enough to receive the desired parental care and guidance to be nurtured ideally as it varies depending upon diverse approaches, and other social and societal factors.

Educationists, sociologists and psychiatrists have produced a lot of literature on this subject. Field studies have classified parenting approaches to child-rearing into certain factions such as overprotective, child-doting; overworked, autocratic and child-centred parents.

For instance, overprotective parents control their children’s moments meticulously in order to save them from being hurt or spoilt physically and emotionally. They try to provide even walker to the baby since she or he may not get injured. Children of such parents become dependent, passive and unable to face challenges ahead. Furthermore, they are unable to do things on their own and their creativity gets diminished.

While child-doting parents take extra care of their children and try to meet all their desires by sacrificing each and everything. They are of the opinion that the child is to be provided with what s/he wishes for pleasure and satisfaction. Studies reveal that there are no complexities in a child’s growth. But later on such children usually feel lack of self-discipline, low esteem and deficient in rendering the spirit of sacrifice. 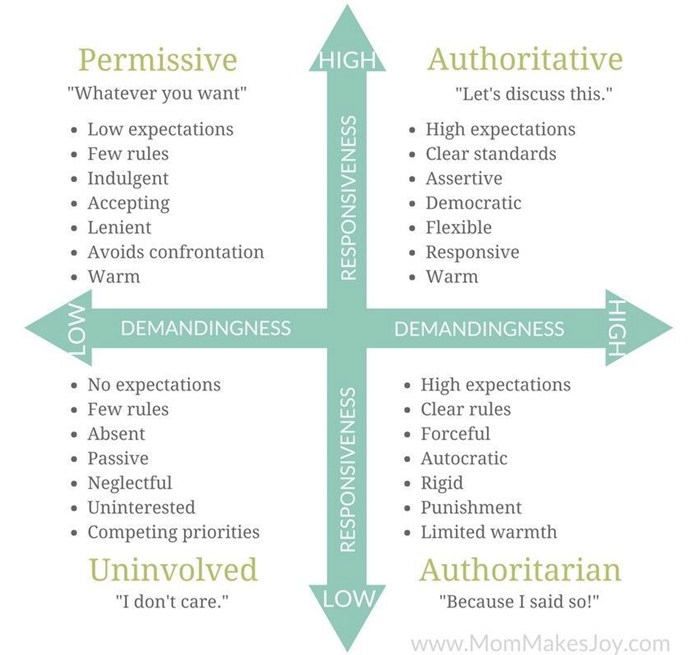 Whereas, busy parents, who are mostly from upper and middle classes, generally prefer their professional life and hobbies. So, they neither interfere in their children’s affairs nor let them to be disturbed in their daily routines. Children of such parents feel neglected which result in lacking self-esteem and getting indulged in social evils.

On the other hand, autocratic parents emphasis on stern discipline for attaining success by following strict schedules for studies, watching TV, eating food, practising meditations, playing games and going to sleep. Corporal punishment is considered vital in case of disobedience. Sometimes children with this type of parenting approach turn to be rebellious and create problems for their parents and others.

Finally, in child-centred parenting, children are being looked after with affection, love and respect. They are involved in decision making and their voices are heard in the process. Studies have shown that such children demonstrate leadership skills with high self-esteem and ultimately happen to be responsible members of their family as well as the society at large.

In light of the aforesaid discussions regarding parenting approaches, there are also good parenting examples found in our society as these parents pay proper heed to their children in studies; take care of their health and hygiene; manage balanced diets and maintain a social life.

Consequently, their endeavours and behaviour in better child grooming reflect in their children’s decent manner, empathetic attitude towards each other; hardworking habits at workplaces; modesty in domestic and social affairs.

But some studies also reveal that a huge number of parents in our surroundings are also suffering from parental attention disorder deficit (PADD) as these types of parents pay little attention to their children owing to their hectic professional life, hobbies and other chores. Consequently, their children are left deprived of proper care and guidance in early ages which may affect them badly when they get matured.

Some of the common problems confronting children deprived of proper parental care and guidance at early ages are malnourishment, learning disability, low self-esteem; drop out from school; challenges in seeking jobs and at times getting hostage to a bad company who drag them in drug addictions and other juvenile delinquencies.

Sometimes, lacking parental care get children vulnerable to be brainwashed in the hands of extremist groups and can be used in crimes and anti-state activities as reported frequently.

However, to raise a child holistically is not an easy job rather a herculean task as it involves multidimensional approaches to child-rearing i.e. parents’ financial status; nature of parenting hereditary and skills, social milieu and level of coordination between teachers and parents.

Succinctly, by keeping in view all facets of children’s personality development and becoming effective and productive human being; it is vital that the state-run departments, civil society, parent educators and school administration should coordinate their efforts and resources to organize awareness programmes for parents (mothers and fathers) at the grassroots level.

In addition, to address issues individually, one-on-one counselling sessions with parents should also be arranged by engaging psychologists, parent educators and teachers in the course. In this regard, school administration can easily engage parents in awareness sessions in the school premises on innovative approaches to parenting skills.

Lastly, the mainstream media and social media can also be used in disseminating awareness programmes by conducting talk shows, sharing success stories of parents and communicating important messages and guidelines on successful parenting approaches in better child-rearing practices. Because a well-round developed child can contribute efficiently to the family as well as to the society at large.

Karim Muhammad Khan works as an administrator and instructor at the College of Education Gilgit. He can be reached at: [email protected]