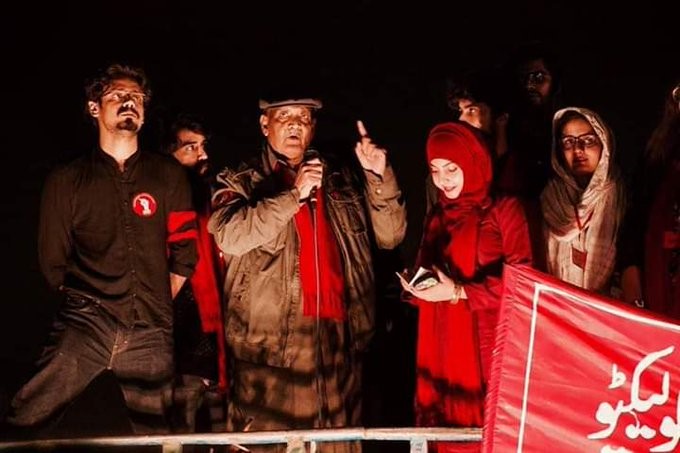 The death of comrade Dr Yasrab Tanvir Gondal, popularly known as Lal Khan for his Marxist views, last Friday is an occasion to reflect on the politics of the Left in Pakistan.

Son of an army colonel from Chakwal, Lal Khan was the author of over a dozen books. including Partition – Can it be Undone? He was a political activist dedicated to the politics of the Left. During General Zia’s martial law, then a young student of Nishtar Medical College in Multan Lal Khan was arrested and sent to jail for his Marxist views. After release, he briefly studied at Rawalpindi Medical College but soon left for the Netherlands as he found the atmosphere too suffocating under the repressive Ziz regime and completed his medical education in Amsterdam

He returned to Pakistan during Benazir Bhutto’s first government but, instead of practicing medicine, formed the Pakistan Struggle Group to promote politics of the Left. He also edited Asian Marxist Review and launched monthly Mazdoor Jeddo Juhd and kept fighting for the cause for as long as he lived.

Except for Bilawal Bhutto Zardari, no other politician took notice of the passing away of Lal Khan or before him recently of another Left-leaning intellectual Jam Saqi. This apathy of the state and society towards Leftist politicians and intellectuals is seen by some as a measure of the decline of the Left itself in Pakistan. The thought about the Left’s doom and gloom gained currency after the collapse of the Soviet Union, China veering towards the market economy and the rise of religious extremism in the 1980s in Pakistan. All of this seems to have dealt a mortal blow to Leftists in Pakistan. But has the Left really become irrelevant also?

While it is true that the Leftists in Pakistan failed to adapt to the changing times and clung to their old slogans condemning everything; down with America, down with imperialism, down with establishment and down with everything. At one time they also opposed Zulfikar Ali Bhutto, accusing him of conceding too little too late. The ‘downing’ chant appealed to the emotions no doubt, but it did not solve people’s immediate problems. It also deflected attention from religious extremism producing human bombs blowing up everything from mosques to churches and from markets to schools in the country.

But this failure of the Left or apathy towards it should not be taken to mean that it has died its ultimate death in Pakistan. The appeal of socialism and socialists slogans has never been lost in human history.

A case can be made that it is the socialism and the socialist slogans that has inspired social security systems in the European capitalist democracies. Human history is a history of injustices, inequalities and vast disparities between the haves and have nots. As long as these injustices persist socialist slogans will resonate with the people.

Countries like Pakistan have vast disparities between the rich and the poor on the economic front on the one hand and between progressive political forces and miltablishment aided by right-wingers on the political front on the other. As long as these disparities persist, leftist slogans challenging the status quo will continue to appeal to the people.

Pakistan needs the politics of the Left more than ever before. The moral compass imposed by the extremist right and the miltablishment for more than three decades has dehumanized the state and society.

The Left will always have relevance because of the abiding relevance of justice for all, as well of promoting diversity in all forms of human expression whether in arts, in music or in literature. The Left glorifies neither religion nor nationality nor ethnicity. When blood is shed in the name of religion or ethnicity, the Left is best placed to counter it.

Political parties and the politics of resistance has weakened during the past decade as the establishment clings to the status quo to perpetuate its power and privileges. In this scenario, the Left is a beacon of hope and offers the nation a moral compass to reverse the process of cannibalization of society that started in the 1980s.

We need a re-united and rejuvenated Left that should first re-frame the national debate in terms of what matters to the state and society. The ideals that matter most are the ideals of peace in the region, ending the animosity with neighbours, ending the privatization of jihad project, humanism, advancing fundamental human rights and economic justice to all.

If Pakistan needs reform, not revolution, it can be brought about through debate and reasoned dissent which is the chief weapon in the hands of the Left. It is the anti-thesis of the self-righteousness of religious extremists claiming to bring a revolution.

In this battle between rational debate and self-righteousness, there must be clarity of thought also. The goal of religious extremists is neither religion nor liberation. They want to dismantle the state structures and taking over of the state itself.

In this battle of ideas, the Left should employ the very dialectics of rightists, instead of appearing to be against religion itself. This means that the Left should have a clear idea of the extreme right’s political discourse.

The political discourse of the extremist right is that religion does not endorse the concept of the nation-state and that there should be one single state of Muslims under a caliph. They maintain that democracy is alien to religion and the right to rule belongs to the pious and religious, instead of the one who is voted by the majority. They also believe that disbelief and apostasy are crimes punishable with death and that it is their duty and right to implement this punishment. The beleaguered Left in the country must re-group itself to challenge this discourse.

Pakistan needs the Left to challenge this narrative, to create and expand space for dissent and discussion and for the airing of alternate views to resolve contentious issues. We need the Left that helps nudge the people in a positive direction. Recently there was talk of some progressive political parties joining hands to lend strength to politics of the Left. The conversation must move forward. This article was first published in The Friday Time.

Farhatullah Babar is a former senator and a veteran politician.