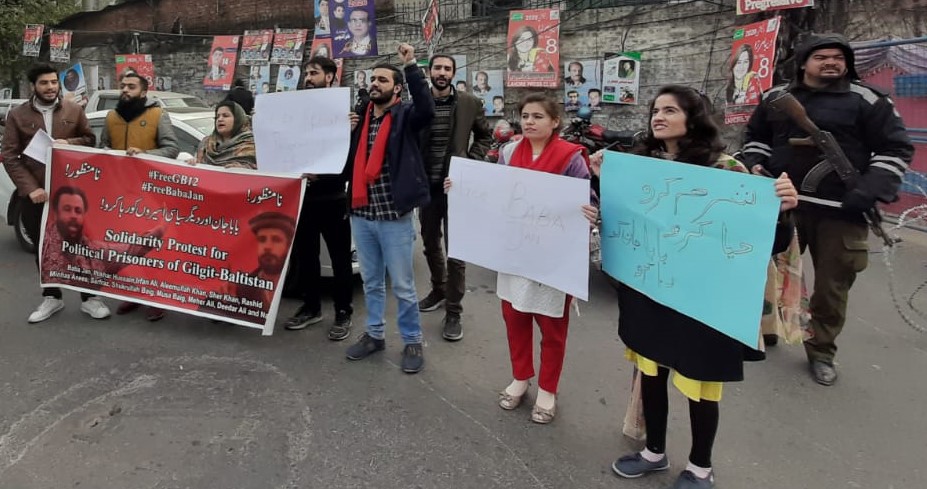 They demand publishing judicial inquiry report of Aug 11, 2011 tragedy, provision of facilities to prisoners in jail, the arrest of the police officer involved in the killing of two persons

LAHORE: A protest was held outside the Lahore Press Club on Sunday for the release of 14 political prisoners, languishing in a Gilgit jail since 2011.

The protesters including progressive political and student activists, as well as the family members of Baba Jan, were holding banners and placards inscribed with demands for the release of the 14 political activists who have been serving a life term in jail for the last nine years.

Most of the convicted activists were sole bread-winners for their families who are now facing immense psychological, financial and emotional hardships. Fazal Karim, one of the accused committed suicide in 2014.

In her speech, Nazneen, sister of Baba Jan, Salman, one of the prisoners who has developed psychological problems due to torture, and now under treatment at the Pakistan Institute of Medical Sciences (PIMS), Islamabad. A sister of one of the prisoners facing life-imprisonment also committed suicide this year as she was not able to bear living with the knowledge that her brother was suffering unjustly in jail.

She condemned the jail authorities for allegedly torturing Minhaj, another prisoner. He was suffering from chest pain and the District Hospital in Gilgit recommended angiography, a facility that is not available in GB. Upon the government’s refusal to take him for medical treatment, he observed a hunger strike for two days. He only ended the strike when Ghizer Districts Deputy Commissioner, SP, and jail superintendent and other officials met him and gave him assurances.

A few days later he was told that he is being taken for treatment but was taken to his uncle’s funeral in Hunza. After the funeral he raised objection over traveling in the police van as he experienced severe chest pain and demanded that he be taken to a hospital immediately, however, the SHO Hunza hit him in the head and he fell unconscious in the middle of the road. He was taken to a hospital for first aid.

In 2013, Baba Jan was granted bail and resumed his activism. He successfully campaigned for the restoration of the provision of wheat on subsidized prices that were withdrawn by the former PML-N government in 2014.  His bail was canceled and he was sentenced to life imprisonment, along-with, 11 others. Undeterred of the coercive tactics by the establishment, he contested elections in 2015 from jail for the Gilgit-Baltistan Legislative Assembly seat from Hunza constituency and managed to finish runner up with massive support from the youth and women. His popularity scared the power that be and the election was delayed multiple times on frivolous grounds until Baba Jan was convicted by the SAC to keep him out of the election fray.

The protesters called on the government to publish the findings of the judicial inquiry into the Aliabad tragedy, bring to justice those who are responsible for the killings of the two displaced persons and provide basic rights including heating and medical facilities and visitation rights.

The protest was organized by the Free Baba Jan Committee which is a group of activists dedicated to raising voice for Baba Jan and other activists imprisoned in the Hunza Riots Case of Aliabad, Hunza, 2011.

They were convicted by an anti-terrorism court in Gilgit in September 2014 on trumped-up charges of sedition, rioting and violence after killing of a disaster-hit man and his son by the police at Aliabad, a main town of Hunza, on August 11, 2011.

The Supreme Appellate Court, the top court of GB, upheld the ATC verdict in 2015. However, the convicts filed a review petition in the SAC which is pending for hearing.

They called for early hearing of the review pleas.

According to media reports and family sources, the prisoners’ health is deteriorating due to consuming unhygienic food, non-availability of heating facilities and provision of treatment facilities as per jail manual, they alleged.

Visitation rights have been restricted to a few family members and the prisoners have even been barred from reading newspapers.