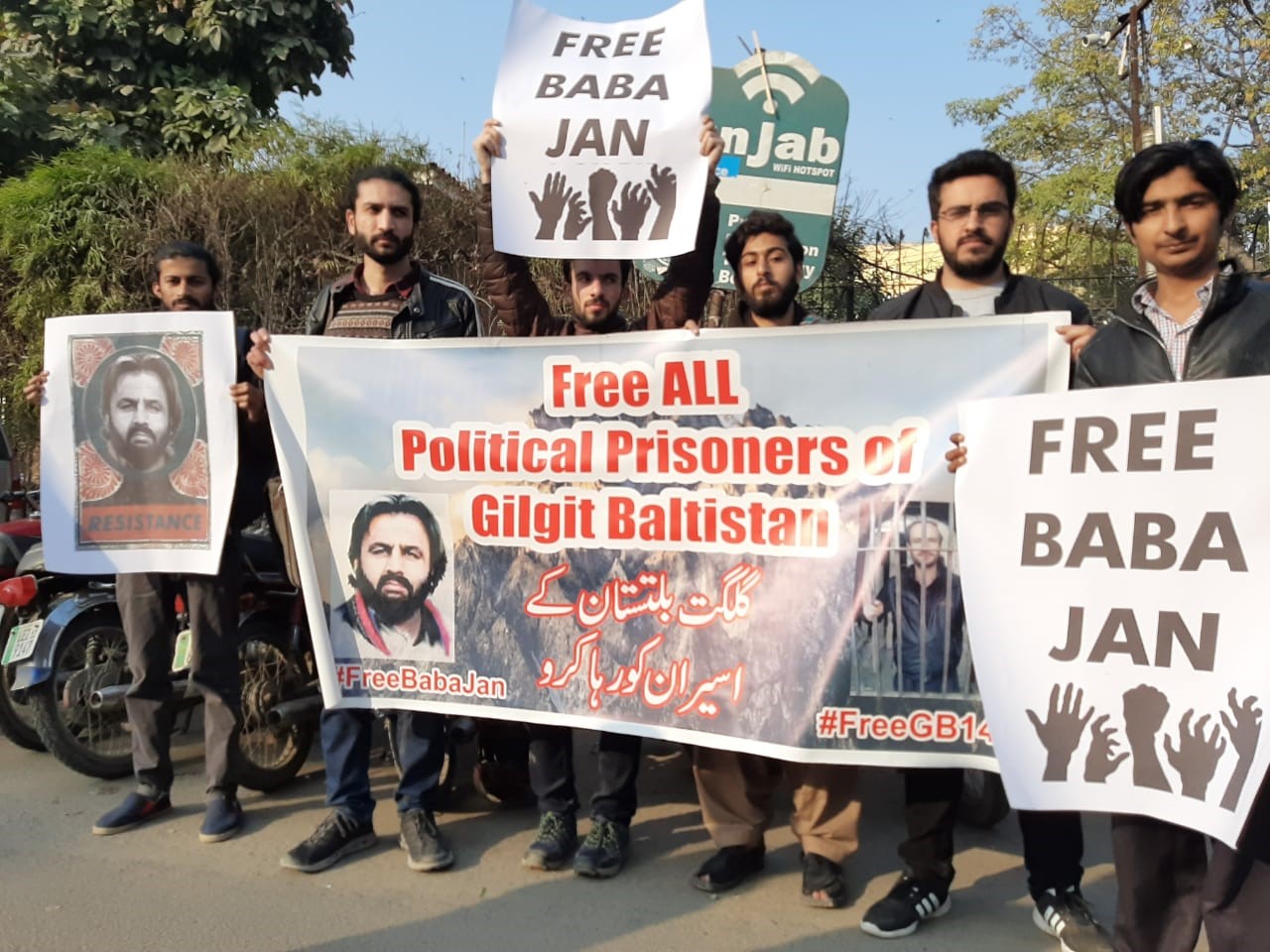 LAHORE: A protest was held at Lahore Press Club on Sunday (19 Jan 2020) to demand the release of 14 political prisoners of Gilgit-Baltistan, sentenced to life imprisonment in the Hunza Riots Case of 2011.  The protest will be held every two weeks.

The protest was organised by students and youth activists from GB on the call of the ‘Free Baba Jan Committee’.

They demanded the release of Baba Jan, a senior leader of Awami Workers Party (AWP) Gilgit-Baltistan and Iftikhar Hussain and 12 other prisoners who have been languishing in Gahkuch jail in Gilgit.

The protesters alleged that the prisoners were convicted on trumped-up charges.

They said that the only crime of Comrade Baba Jan and other activists was to raise voice for the displaced families of Attabad Disaster of 2010 and other fundamental democratic and constitutional rights of the Gilgit-Baltistan.

During the nine years’ incarceration in jail, they have been subjected to physical and psychological torture denying the rights to them as per jail manual.

They called on the Pakistan government to make public the findings of the judicial inquiry commission into the killings of two displaced persons and bring those police officers to justice who are responsible for the violence.

They also demanded that GB authorities must improve jail conditions, ensure the provision of heating and medical facilities, newspapers to the inmates and allow family members and friends to meet the prisoners.

The protest was organized by the Free Baba Jan Committee, a group of activists dedicated to raising voice for the release of Baba Jan and other activists.

The protesters vowed to continue to raise their voice till the release of the prisoners.

Earlier they had organised a similar protest on December 30 at Lahore.

On January 4, 2010, a massive landslide hit the Attabad village of Hunza killing 20 people. The landslide debris spread over 3km blocked the Hunza River and created a 23km lake that submerged several villages and displaced hundreds of people.

After months of lukewarm government response to the disaster, Baba Jan organised the internally displaced people (IDP) seeking payment of compensation for the loss of their land and houses.

On August 12, 2011, the displaced families held a peaceful protest on KKH at Aliabad town of Hunza during a visit of the then GB Chief Minister to Attabad, police in a bid to disperse the protesters opened fire, killing Sherullah Baig and his son Muhammad Afzal. The news of the killings sparked riots throughout the region, resulting in damages to several government buildings.

Despite the fact that Baba Jan was not even present when the rioting broke out, he was targeted for his activism. In September 2011, he and several other activists were arrested under the draconian Anti-Terrorist Act and thrown behind the bar, where he was tortured and denied medical treatment.

Jan remained in jail for two years (2011-14) and was granted bail after a series of protests for his release in GB, cities of Pakistan and across the world.

He was again thrown in jail in September 2014 when his bail was cancelled.

In May 2015, Baba Jan contested elections from behind bars for the Gilgit-Baltistan Legislative Assembly seat from Hunza on Awami Workers Party (AWP) ticket.

Thousands of students, youth and working-class supporters including women ran his campaign. Jan’s popularity in the region can be witnessed by the fact that he came second in the elections.

A year later in 2016, Jan was set to contest the by-polls on AWP ticket again after the then ruling party MLA Ghazanfar Ali Khan quit his seat to become governor. Jan’s candidacy was rejected by the returning officer.

He filed an appeal in the Chief Court and got relief but the government candidate challenged the decision in the Supreme Appellate Court. The SAC in order to keep him out of the election fray first overturned the Chief Court verdict and upheld the ACT judgment increasing the jail term for Baba Jan and 14 others to 70 years in a questionable manner making ground for declaring him ineligible to contest elections.

Jan filed a review petition against his conviction in the SAC in August 2016. The court admitted the petition in October 2016 but the plea is pending a hearing for the last three years.

Concerned about the incarceration of Jan and other political prisoners in jail as a result of the delay in hearing of the review plea, at least 18 left-wing parliamentarians from France, Germany, Ireland, Switzerland, Tunisia, Malaysia and over 400 prominent individuals from 49 countries including Noam Chomsky, Tariq Ali, Sami Amin, Philippe Pouto, Gilbert Archer and Luciana Genro, signed a petition asking the GB and Pakistan governments to release Baba Jan.

The UN Commission Office on Human Rights in its two reports in 2018 and 2019 has also questioned the misuse of ATC in GB and asked the Pakistan government to release the political prisoners.

Why Pakistani state is afraid of Baba Jan?

Baba Jan has been targeted first for being a socialist. His incarceration is simply another chapter in the long history of the violent state repression of the Left by the feudal, capitalist and military-bureaucratic elite of Pakistan.

Secondly, he is from a disputed region where resistance politics has long been suppressed. Its residents have for over seven decades been governed through neo-colonial bureaucratic diktat from Islamabad.

Finally, as a critic of the policy of usurpation of the natural resources of GB by the ruling elite, Jan was a symbol of resistance and had become a thorn in the side of those wishing to profit from the multibillion-dollar CPEC project and grab the land of the people in the name of security.

Before being jailed, Jan had played a leading role in organising a movement against the withdrawal of subsidy on wheat in 2014.

The coercive tactics by the establishment in silencing the dissenting voices would further entrench popular alienation in a region already embittered by decades of neo-colonial control from Islamabad and exclusion from decision-making on critical matters that profoundly affect its people.