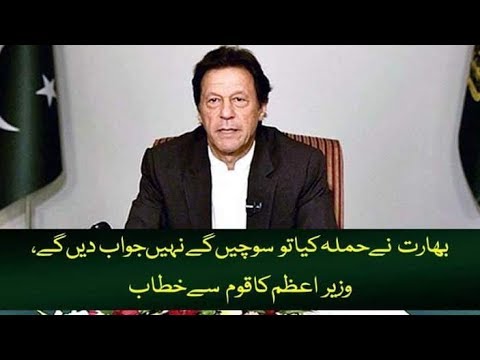 Pakistan has warned it will retaliate if India takes military action against it after a militant attack on Indian forces in Indian-administered Kashmir.

Prime Minister Imran Khan went on television on Tuesday to call on India to provide evidence to support its claims that Pakistan was involved.

Prime Minister Khan said his country had nothing to do with a suicide bombing that killed 40 Indian troopers in Kashmir, adding that tensions can only ease with dialogue.

Khan said India had “leveled allegations against Pakistan without any evidence” and his government was ready to cooperate with New Delhi in investigating the blast in Indian-administered Kashmir.

“If you think that you will launch any kind of attack on Pakistan, Pakistan will not just think about retaliation, Pakistan will retaliate,” he said, adding that only dialogue could help solve issues in Kashmir.

Mr Khan, who took office last year, said his government was ready to co-operate with India in investigating the attack. But he also said Delhi should reflect on why Kashmiri youth had reached a point where they no longer feared death.

The prime minister said he had not addressed the attack earlier because of Saudi Crown Prince Mohammed bin Salman’s high-profile visit to Pakistan on Sunday and Monday.

Pakistan’s Foreign Minister Shah Mahmood Qureshi appealed to the UN Secretary General on Tuesday to help ease tension with India that has escalated sharply following a suicide bomb attack in the Indian part of disputed Kashmir, that India blamed on Pakistan.

Indian Prime Minister Narendra Modi, facing an election by May, has warned Pakistan to expect a “strong response” to the bombing raising fears of conflict between the nuclear-armed neighbours.

“It is with a sense of urgency that I draw your attention to the deteriorating security situation in our region resulting from the threat of use of force against Pakistan by India,” Qureshi wrote to UN Secretary General Antonio Guterres.

“It is imperative to take steps for de-escalation.  The United Nations must step in to defuse tensions,” he wrote, blaming India for deliberately ratcheting up its hostile rhetoric for domestic political reasons.

“Attributing it to Pakistan even before investigations is absurd,” Qureshi said.

“India must be asked to conduct an open and credible investigation on Pulwama incident,” he said.

Muslim-majority Jammu and Kashmir, a former princely state on the border between India and Pakistan, has been in dispute since the partition of India in 1947.

Control is split between the two countries but each claims the region in full.

The neighbours have fought three wars since 1947, two of them over Kashmir. They have fought countless skirmishes along their de facto border, whic

h the UN monitors, in the Himalayan region.

In 2018, India allocated Rs4 trillion (44.85 billion pounds), or 2.1 percent of its gross domestic product (GDP), to support its 1.4 million active troops, according to the International Institute for Strategic Studies (IISS).

Between 1993 and 2006, more than 20 percent of Pakistan’s annual government expenditure was spent on the military, according to estimates from the Stockholm International Peace Research Institute (SIPRI).

The military accounted for 16.7 percent of government spending in 2017, it said.

By comparison, India’s military spending as a percentage of its government expenditure remained under 12 percent during the same period, according to SIPRI. It was 9.1 percent in 2017.

Both nations have ballistic missiles capable of delivering nuclear weapons. India has nine types of operational missiles, including the Agni-3 with a range of 3,000 km (1,864 miles) to 5,000 km (3,106 miles), according to the Center for Strategic and International Studies (CSIS) in Washington.

Pakistan’s missile programme, built with Chinese assistance, includes mobile short- and medium-range weapons that can reach any part of India, CSIS said. The Shaheen 2 has the longest range, of up to 2,000 km (1,242 miles)

India has a 1.2 million-strong army, supported by more than 3,565 battle tanks, 3,100 infantry fighting vehicles, 336 armored personnel carriers and 9,719 pieces of artillery, according to IISS.

Despite its larger army, the capability of India’s “conventional forces is limited by inadequate logistics, maintenance and shortages of ammunition and spare parts”, IISS said in a report this month.

With 127,200 personnel and 814 combat aircraft, India’s air force is substantially larger but there are concerns about its fighter jet fleet.

India’s defence plans require 42 squadrons of jets, about 750 aircraft, to defend against a two-pronged attack from China and Pakistan. With older Russian jets like the MiG-21, first used in the 1960s, retiring soon, India could have 22 squadrons by 2032, officials say.

“The (Pakistan) air force is modernizing its inventory while improving its precision-strike and ISR (intelligence, surveillance, and reconnaissance) capabilities,” IISS said in its 2019 assessment.

Pakistan, which has a significantly smaller coastline, has 9 frigates, 8 submarines, 17 patrol and coastal vessels, and 8 combat capable aircraft.–Reuters