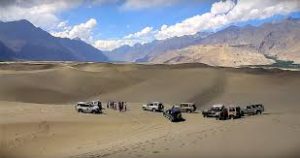 SKARDU, Aug 14: All is set for highest cold desert jeep rally being held this week. About 200 drivers from abroad, Pakistan and locals will participate in the event, officials told The High Asia Herald on Sunday.

The #Sarfa #Ranga in #Shigar District of #Baltistan Division, about 20km off Skardu, is one of the highest cold deserts in the world. The desert is surrounded by snow-capped mountains, #Jharba #Tso beautiful lake, the mighty River Indus and Sarfa Ranga village.

Divisional Commissioner #Asim #Ayub told media-persons that the #Gilgit-Baltistan government was playing leading role in organising the event in collaboration with Pakwheels with an aim to introduce a sporting event of national scale in GB to diversify tourism activities and extend the tourism season in the region. That will ultimately benefit the local people associated with tourism, Ayub said

Diving details about the event, he said the jeep rally would start from #Bab-i-Shigar at 8am and culminate at the same spot at 3pm, covering a distance of 30km.

The commissioner said that motorcyclists are also participating in the race. A pre-qualification race will be held on Aug 19 from 10am to 3pm, he said, adding that interested local drivers could register for the race by Tuesday (Aug 15).

He informed the media that on Aug 18 a tent village would be established at Jharba Tso, where a #Zakh (makshift skin raft) competition would also be held on the same day.

The commissioner said a gemstone and food exhibition, photo competition as well as music and dance show would also be arranged.

Additionally, he said a freestyle polo match would be held at Royal Polo Ground, adding local traditional festival of ‘May Fang’ (lighting/fire playing) would also be held at Skardu’s Yadgar-i-Shuhada to entertain the international and national drivers.

According to the organisers, PakWheels.com and Mountain Dew, all the rally participants should arrive at Sarfa Ranga Dessert by August 17.
Full course reece will be allowed as per the scheduled dates advised in event schedule for the participating drivers along with their co-drivers. The participants will do the reece in their own vehicles on Friday (Aug 18).

A tent village has been set up at Blind Lake side of Sarfa Ranga Desert for the participating drivers and their co-drivers.

Top 50 rally winners will get free fuel vouchers up to Rs25,000 who will participate and complete the terms and conditions. PakWheels.com will refund 100% of entry fee in case of failure to hold the event, says its web portal.

The Sarfa Ranga sand dunes also known as the cold desert are situated at an altitude of 10,000 feet with strong winds that shift the dunes, forming different shapes each time. This cold dessert is extended from Khaplu Valley to Nubra Ladakh and Shigar and Skardu valley to Zanskar in India.

This desert holds a unique place in the hearts of travellers due to its high altitude and cold region. The shooting stars and the moving galaxy spread in the sky in cold nights of Sarfaranga. The Indus River beside crystal clear water reflects the image of colourful trees, enhancing the beauty of Sarfa Ranga village.